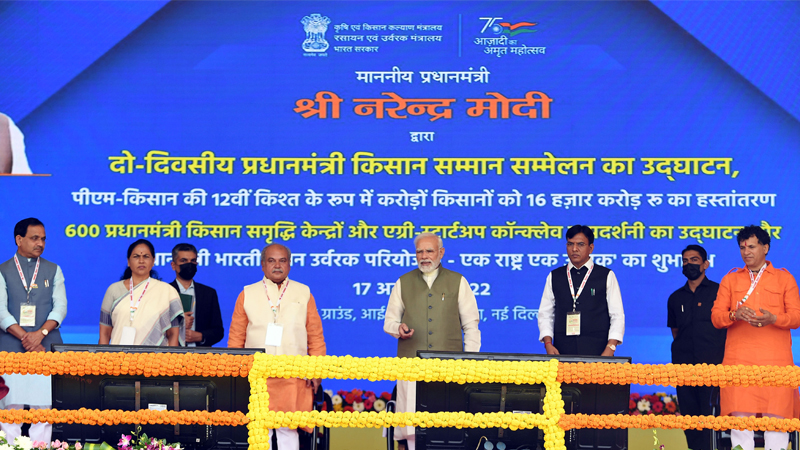 Addressing the gathering, the Prime Minister started by acknowledging the presence of Jai Jawan, Jai Kisan, Jai Vigyan and Jai Anusandhan in one premise, and said that we can see the live form of this mantra here today. He further elaborated that Kisan Sammelan is a means to make the lives of farmers easier, boost their capability and promote advanced agricultural techniques.

“More than 600 Pradan Mantri Sammridhi Kendra have been inaugurated today”, Shri Modi said. He further elaborated that these Kendras are not merely sales centres for fertiliser but a mechanism for establishing a deep bond with the farmers of the country. Regarding the fresh instalment of the  Pradhan Mantri Kisan Samman Nidhi (PM-KISAN), the Prime Minister said that the money reaches the accounts of the farmers directly without involving any middleman. “Another instalment of Rs 16,000 crore has also been released to crores of farmer families as PM Kisan Samman Nidhi”, Shri Modi added and expressed happiness that this instalment is reaching the farmers just before Diwali. The Prime Minister also said that today, Pradhan Mantri Bhartiya Jan Urvarak Pariyojana – One Nation One Fertiliser has also been launched which is a scheme of ensuring affordable quality fertiliser of Bharat brand to the farmers.

Recalling the time before 2014 when farmers had to deal with the troubled agricultural sector and black marketing of urea, the Prime Minister exclaimed that the farmers had to bear the brunt of the baton to claim what was rightfully theirs. The Prime Minister interjected that the government tackled the black marketing of urea by coating it with 100% neem. “We worked hard to restart the country’s 6 largest urea factories, which were closed for years”, he added.

Highlighting the steps that have immensely benefited the hardworking farmers, the Prime Minister remarked that India is rapidly moving towards self-sufficiency in liquid nano urea production. Shri Modi pointed out, “Nano Urea is a medium to produce more with less cost.” Stating its benefits, the Prime Minister said that a sack full of urea can now be replaced by a single bottle of nano urea. He further added that the transportation costs of urea would go down significantly.

The Prime Minister mentioned two new measures in the fertiliser reform story of India. Firstly, a campaign is being initiated today to develop more than 3.25 lakh fertiliser shops across the country as Pradhan Mantri Kisan Samruddhi Kendras. These will be centres where farmers can buy not only fertilisers and seeds but also implement soil testing and avail useful information about farming techniques. Secondly, with One Nation, One Fertiliser, the farmer is going to get rid of all kinds of confusion about the quality of the fertiliser and its availability. “Now the urea sold in the country will be of the same name, same brand and same quality and this brand is Bharat! Now urea will be available only under ‘Bharat’ brand name in the entire country ”, Shri Modi remarked. He further added that it will result in reducing the cost of fertilisers and increase their availability.

Stressing the need of the hour to adopt technology-based modern farming techniques, the Prime Minister said that we have to create new systems in agriculture, adopt more scientific and technological methods with an open mind. With this thinking, we have emphasized boosting scientific methods in agriculture, and maximum use of technology. The Prime Minister informed that 22 crore soil health cards have been distributed so far and scientific efforts are on for providing best quality seeds. “During the last 7-8 year about 1700 new varieties of seeds that are suited to the changed climate conditions have been made available to the farmers”, he said.

The Prime Minister also highlighted the increasing curiosity about millets on the global level. He said, “Today, many hubs are being built in the country to increase the quality of the seeds of the traditional coarse grains- millets that we have here.” Throwing light on the efforts of the government to encourage India’s coarse grains all over the world, the Prime Minister informed that the next year has been declared as the International Year of Coarse Cereals.

Stressing the need to encourage natural farming, the Prime Minister informed that it provides an important medium to solve the challenges of the future. We are experiencing a lot of awareness across the country today, the Prime Minister highlighted. Farmers are working on a large scale in Gujarat, Himachal Pradesh and Andhra Pradesh as well as in UP, Uttarakhand for natural farming. In Gujarat, plans are being made for this at the district and gram panchayat level as well.

Highlighting the transformational initiative of PM-KISAN, the Prime Minister remarked that PM Kisan Samman Nidhi is an example of how small farmers benefit from the use of modern technology. “Since the launch of this scheme, more than Rs 2 lakh crore has been directly transferred to the bank accounts of farmers. For small farmers who are more than 85 percent of the country’s farmers, this is a huge support”, he said.

“Steps that ensure ‘Ease of Living’ for our farmers today”, the Prime Minister continued, “By using better and modern technology, we are also reducing the distance between the farm and the market.” The biggest beneficiary of this is also the small farmer, who is associated with perishable products like fruits, vegetables, milk and fish. Kisan Rail and Krishi Udan air service are helping a lot in this. These modern facilities are today connecting farmers’ fields to major cities across the country and markets abroad. He informed that India is among the top 10 countries in terms of agricultural exports. Agri exports increased by 18 per cent despite the problems of the worldwide pandemic. Mentioning area-specific exports, the Prime Minister said that these initiatives are being supported under the One District One Product scheme and export hubs are being established at the district level. Similarly, processed food is getting more income for the farmers. The number of large food parks increased from 2 to 23. At the same time FPOs and SHGs are being linked with these parks. e-NAM has ushered in a positive impact on the lives of farmers. e-NAM is also enabling farmers to sell their produce in any market in the country with the use of technology. “More than 1.75 crore farmers and 2.5 lakh traders have been linked with e-NAM. Transactions through e-NAM have exceeded Rs  2 lakh crore”, he informed.

Throwing light on the growing number of startups in the agricultural sector in the country, the Prime Minister remarked that it augurs well for the sector and rural economy. “Startups and innovative youth are the future of Indian agriculture and the rural economy of India. From cost to transportation, our startups have the solution to every problem”, Shri Modi said.

Dwelling upon the reasons for his relentless insistence on Aatmnirbharta, the Prime Minister said key products like edible oil, fertiliser, and crude oil account for huge financial outgo and global situations that impact the supply also. He gave examples of DAP and other fertilisers, prices of which escalated exorbitantly and India had to buy urea at the rate of 75-80 rupees per kg, though it was supplied to farmers at 5-6 rs per kg. Shri Modi added that the government will spend 2.5 lakh crore rupees to ensure affordable fertiliser to farmers this year too, he said. He mentioned measures regarding bio-fuel and ethanol for reducing foreign dependence with regard to crude oil and gas.

Concluding his address, the Prime Minister urged the farmers of India to make the most of Mission Oil Palm which is a step in the direction of achieving Atmanirbharta in the edible oil sector. He further added that by increasing the production of oil seeds, India can reduce the consumption of edible oils. “Our farmers are more than capable in this field”, Shri Modi added. Recalling his clarion call in 2015 regarding the production of pulses, the Prime Minister expressed delight at the 70% increase in pulse production and thanked the farmers. “We will make agriculture attractive and prosperous in the Azadi Ka Amrit Mahotsav”, the Prime Minister said and concluded his address by wishing the best to all the farmers and startups.

The event brings together more than 13,500 farmers from across the country and around 1500 Agri Startups. More than 1 crore farmers from various institutions are expected to attend the event virtually. The Sammelan will also witness the participation of researchers, policymakers and other stakeholders.

The Prime Minister inaugurated 600 Pradan Mantri Kisan Samruddhi Kendras (PMKSK) under the Ministry of Chemicals & Fertilisers. Under the scheme, the retail fertiliser shops in the country will be converted into PMKSK in a phased manner. PMKSK will cater to a wide variety of needs of the farmers and provide agri-inputs (fertilisers, seeds, implements), testing facilities for soil, seeds, and fertilisers; generate awareness among farmers; provide information regarding various government schemes and ensure regular capacity building of retailers at block/district level outlets. More than 3.3 lakh retail fertiliser shops are planned to be converted into PMKSK.

In a reflection of the continued commitment of the Prime Minister towards the welfare of the farmers, during the event, the Prime Minister also released the 12th instalment amount of Rs. 16,000 crores under the Pradhan Mantri Kisan Samman Nidhi (PM-KISAN) through Direct Benefit Transfer. Under the scheme, eligible farmer families are provided benefits of Rs. 6000 per year in three equal instalments of Rs. 2000 each. So far, eligible farmer families have received benefits worth more than Rs. 2 lakh crore under PM-KISAN.

The Prime Minister further inaugurated the Agri Startup Conclave and Exhibition. About 300 startups will showcase their innovation related to Precision Farming, Post-Harvest & Value Add Solutions, Allied Agriculture, Waste to Wealth, Mechanisation for Small Farmers, Supply Chain Management, and Argi-Logistic among others. The platform would facilitate startups to interact with farmers, FPOs, agri-experts, corporates etc. Startups will also share their experience and interact with other stakeholders in technical sessions.

During the event, the Prime Minister also launched ‘Indian Edge’, an e-magazine on fertiliser. It will provide information on domestic and international fertiliser scenarios, including recent developments, price trends analysis, availability and consumption, and success stories of farmers among others.