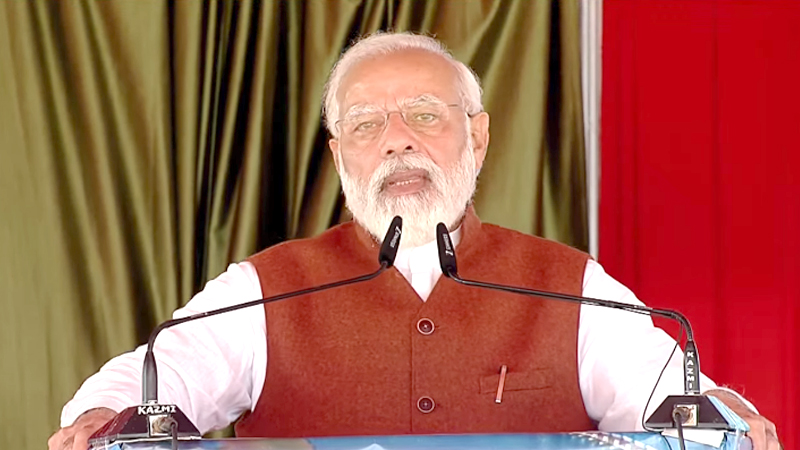 Addressing the gathering, the Prime Minister paid homage to India’s first Chief of Defence Staff, General Bipin Rawat and said that his demise is a great loss for every Indian, for every patriot. “The whole country has been a witness to the hard work that General Bipin Rawat ji was doing to make the country’s forces self-reliant” he said. The Prime Minister continued and said that though India is in sorrow ‘but even after suffering the pain, we neither stop our pace nor progress. India will not stop. Efforts to make the country’s armed forces self-reliant Campaign to strengthen coordination between the three armies, Will keep moving forward. General Bipin Rawat, in the days to come, will see his India moving forward with new resolutions. The work of improving the security of the country’s borders, Work to strengthen border infrastructure will continue’ he added. He said the doctors are working hard to save the life of Group Captain Varun Singh who is a son of Uttar Pradesh, a resident of Deoria. “I pray to Maa Pateshwari to save his life. The nation is with the family of Varun Singh ji today and with the families of the heroes we have lost”, the Prime Minister said.

The Prime Minister said proper utilization of the water of the country’s rivers, and adequate water reaching the farmers’ fields, is one of the top priorities of the government. The completion of the Saryu Canal National Project is proof that when the thinking is honest, the work is also solid.

The Prime Minister said when the work on this project started, its cost was less than Rs 100 crore. Today it has been completed after spending about 10 thousand crores. The country has already paid 100 times more for the negligence of the previous governments. “If it is government money, then why  should I care? This thinking had become the biggest obstacle in the balanced and all-round development of the country. This thinking also kept the Saryu canal project hanging”. The Prime Minister said ‘We have done more work in the Saryu canal project than what was done in 5 decades in less than 5 years. This is a double engine government. This is the speed of work of the double engine government, our priority is to finish the project on time”.

The Prime Minister listed  long pending projects like Baan Sagar Project, Arjun Sahayak irrigation project, AIIMS and fertilizer plant at Gorakhpur that were completed by the double engine government. He also cited Ken Betwa Link project as an example of this government’s commitment. The 45000 crore Rs project was approved in the last Cabinet meeting. The project will play a key role in getting the Bundelkhand region rid of the water problem. The Prime Minister also said that small farmers are being linked to government schemes for the first time. PM KIsan samman Nidhi, alternative income streams in fishery and dairy and bee culture and opportunities in ethanol are some of the steps being taken. In the last four and half years, ethanol worth 12000 crore has been purchased from Uttar Pradesh itself, the Prime Minister said. The Prime Minister invited the farmers for the event being organized on 16th Dec about natural farming and zero budget farming. He also informed that more than 30 lakh families of the state have got pucca houses under PMAY, most of them are in the name of the women of the families. He also talked about the benefits of the Svamitva yojna.

The Prime Minister said in this Corona period, sincere effort was made so that no poor should sleep hungry. Right now, the campaign for free ration being provided under PM Garib Kalyan Anna Yojana has been extended beyond Holi.