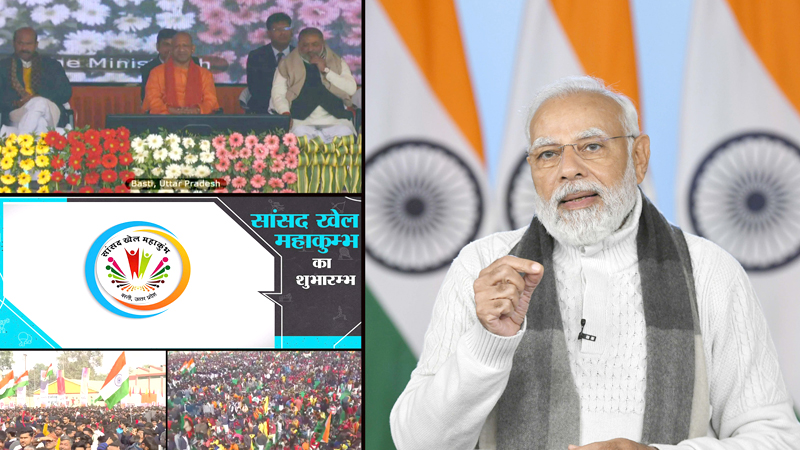 Addressing the gathering, the Prime Minister said that Basti is the pious land of Maharishi Vashist which is made up of labour and meditation, asceticism and renunciation. Drawing an analogy to the life of a sports player filled with meditation and penance, the Prime Minister said that successful sports players are focused on their goal and overcome every obstacle in their path.

The Prime Minister appreciated the scale of Khel Mahakumbh and expressed hope that India’s traditional expertise in sports will get a new wing through such events. He informed that about 200 Parliamentarians have organised such Khel Mahakumbh in their constituencies. As Member of Parliament from Kashi, Shri Modi informed that such events are being organised in Varanasi also. “By organising such events, MPs are shaping the future of the new generation”, the Prime Minister said.

The Prime Minister informed that through these games, performing athletes are being picked up for further training under the Sports Authority of India. The Prime Minister expressed happiness that about 40,000 athletes, three times more than the last year, are participating in the Khel Mahakumbh.

The Prime Minister expressed delight at witnessing a game of Kho Kho where our daughters of the land played the game with great skill, dexterity and team spirit. The Prime Minister congratulated everyone involved in the game and wished them the very best in their pursuit.

Highlighting the key aspect of girl’s participation in the Sansad Khel Mahakumbh, the Prime Minister expressed the belief that the daughters of Basti, Purvanchal, Uttar Pradesh and all over India will showcase their talent and skills on a global stage. Recalling the Women’s U-19 T20 Cricket World Cup, the Prime Minister highlighted the splendid achievement of the team captain Ms Shefali Verma who scored five consecutive boundaries and hit a six on the last ball, thereby accumulating 26 runs in one over. He remarked that such talent is available in every nook and corner of the country and the Saansad Khel Mahakumbh plays a key role in scouting and harnessing it.

The Prime Minister recalled the time when sports was considered an ‘extracurricular’ activity and was relegated to a hobby or activity without much value, a mentality that greatly harmed the country. This led to many talented sportspersons not achieving their potential. In the last 8-9 years, the country has taken many initiatives to overcome this drawback and create a better environment for sports. This has resulted in many more youngsters taking up sports as a career. Among the public also benefits like fitness, health, team bonding, tension relieving, professional success and personal improvement.

Throwing light on the thought process among people regarding sports, the Prime Minister said that the effects of change can be seen through the sports achievements of the country. The Prime Minister gave examples of the historic performance of the nation in the Olympics and Paralympics and remarked that India’s performance in various sports fields is becoming a point

of discussion in the world. Sports is getting due prestige in society, he said. This has resulted in unprecedented performance in the Olympics, Paralympics and other competitions.

“This is just the beginning, we have a long way to go”, the Prime Minister continued,.”Sports is skill and character, it is talent and resolve.” Highlighting the importance of training in the development of sports, the Prime Minister suggested that sports competitions should be continued to give players a chance to test their training. The Prime Minister explained that sports competitions at different levels and regions make the players aware of their potential thereby helping them develop their own techniques while also helping the coaches in identifying shortcomings and providing room for improvement. Youth, University and Winter Games are giving many opportunities to athletes to keep improving. Through Khelo India financial assistance of 50,000 per month is also being provided to 2500 athletes. About 500 Olympics probables are being groomed under Target Olympics Podium Scheme (TOPS). Keeping in mind the need for international training, some players have received assistance from 2.5 crores to 7 crore.

The Prime Minister highlighted the role of the Central Government in overcoming the challenges faced by the sports sector and informed that special emphasis is being laid on ensuring adequate resources, training, technical knowledge, international exposure, and transparency in the selection of our players. Noting the improvements in sports infrastructure in the region, the Prime Minister informed that stadiums are being built and coaches are being arranged in Basti and other such districts. He also added that more than one thousand Khelo India district centres are being set up across the country out of which more than 750 of these centres have been completed. Geo-tagging of all playgrounds across the country is also being done so that players do not face any problems in getting training. He informed that the Government has constructed a Sports University in Manipur for the youth of the North East and another Sports University is also being constructed in Meerut, UP. Throwing light on the efforts of the state government, the Prime Minister noted that hostels are also being run in many districts of Uttar Pradesh to promote sports. “Efforts are also being made to provide national-level facilities at the local level”, Shri Modi added.

Chief Minister of Uttar Pradesh, Shri Yogi Adityanath, and Member of Parliament, Shri Harish Dwivedi were present on the occasion among others.

The Khel Mahakumbh is a novel initiative that provides an opportunity and a platform for the youth of District Basti and neighbouring areas to showcase their sporting talent, and motivates them to take sport as a career option. It also endeavours to inculcate the spirit of discipline, teamwork, healthy competition, self-confidence and nationalism among the youth of the region.