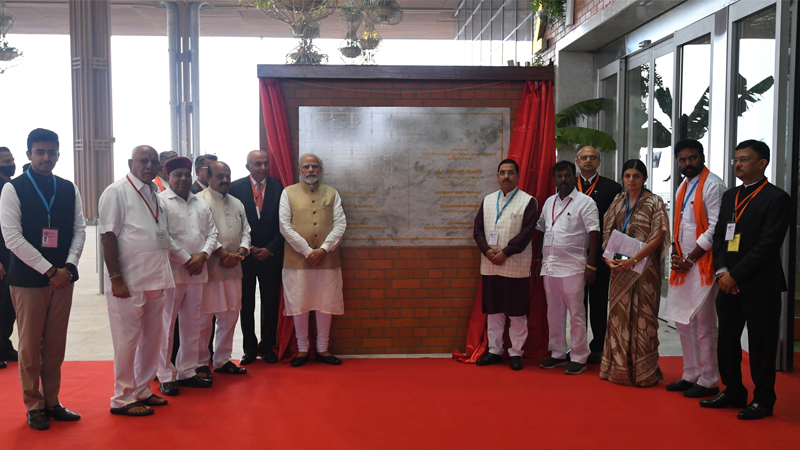 “Terminal 2 of the Kempegowda International Airport, Bengaluru will add capacity and further convenience. It is a part of our efforts aimed at providing top class infrastructure to our urban centres. The Terminal is beautiful and passenger friendly! Glad to have inaugurated it.”

Terminal 2 of Kempegowda International Airport in Bengaluru is built at a cost of around Rs. 5000 crores. The terminal will double the passenger handling capacity of the airport to 5-6 crore passengers per annum, from the current capacity of about 2.5 crores.

Terminal 2 is designed as a tribute to the Garden city of Bengaluru and the passenger experience is meant to be a “walk in the garden”. Passengers will travel through 10,000+ square metres of green walls, hanging gardens and outdoor gardens. The Airport has already established a benchmark in sustainability with 100% usage of renewable energy across the campus. Terminal 2 has been created with sustainability principles woven into the design. Based on the sustainability initiatives, Terminal 2 will be the largest terminal in the world to be pre-certified platinum rating by US GBC (green building council) prior to commencing operations. The theme of ‘Naurasa’ unites all the commissioned artworks for Terminal 2. The artworks reflect the heritage and culture of Karnataka as well as the broader Indian ethos.

Overall, the design and architecture of Terminal 2 have been influenced by four guiding principles: Terminal in a garden, sustainability, technology and art & culture. All these facets showcase T2 as a terminal that is modern yet rooted in nature and offers a memorable ‘destination’ experience to all travellers.