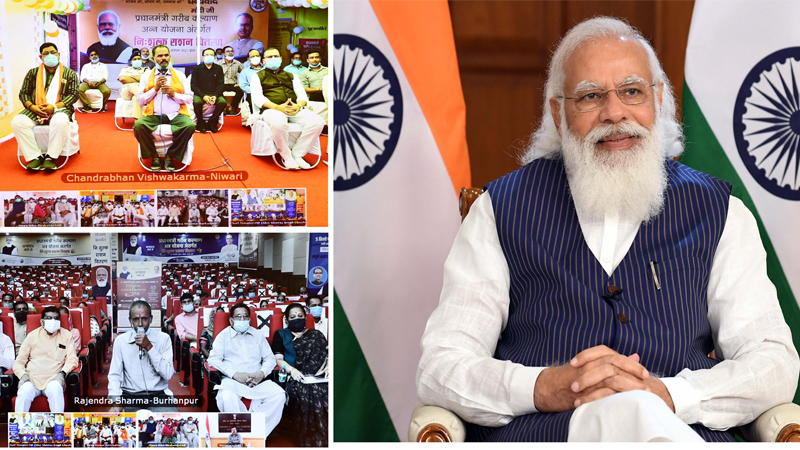 The Prime Minister, Shri Narendra Modi interacted with the beneficiaries of Pradhan Mantri Garib Kalyan Anna Yojana (PMGKAY) in Madhya Pradesh today via video conferencing.An intensive campaign to create more awareness about the scheme is being conducted by the state government so that no eligible person is left out. The state is  celebrating 7th August, 2021 as Pradhan Mantri Garib Kalyan Anna Yojana Day. Governor and Chief Minister of Madhya Pradesh were present on the occasion. About 5 crore beneficiaries are getting the benefit of the scheme in Madhya Pradesh.

Speaking on the occasion, the Prime Minister started with the rains and flood situation in Madhya Pradesh that has impacted lives and livelihood in the state. He assured that, in this difficult hour, Government of India and entire country is standing with them.

Referring to Corona pandemic as once in a century calamity, the Prime Minister said that entire nation stood as one to fight against the challenge. He reiterated that, in the strategy for dealing with the crisis, India accorded the highest priority to the poor.  From the very first day itself, attention was paid to food and employment of  the poor and labourers. Not only more than 80 crore citizens are getting free ration but more than 8 crore poor families got free gas cylinder. 30 thousand crore rupees were directly transferred to the Jan-Dhan accounts of more than 20 crore women. Similarly, thousands of crore rupees were transferred to the accounts of laborers and farmer. He also informed about thousands of crore rupees will be transferred in the bank accounts about 10-11 crore farmer families on 9th August.

Mentioning the recent landmark of administering 50 crore vaccine doses, the Prime Minister mentioned that India is vaccinating population equal to many countries of the world in just a week. “ This is new capability of new India, India who is becoming Aatmnirbhar” he said. He said this vaccine is both safe and effective and called for accelerating the vaccination further.

He said that it is being continuously ensured that minimum damage should occur in India during this unprecedented crisis on livelihood all over the world. Assistance worth lakhs of crore rupees was made available to small and micro industries so that they continue functioning and ensure livelihood to the stakeholders. Initiatives like One Nation One Ration Card, scheme for fair rent, affordable and easy loan through PM Svanidhi, infrastructure projects helped the labour class a great deal.

Talking about the advantages double engine government at the state,  the Prime Minister lauded the state government for record MSP purchase. Madhya Pradesh, this year, purchased wheat from more than 17 lakh farmers and 25 thousand crore rupees were directly deposited in their account. The state established maximum number of wheat purchase centres this year. In ‘Double-Engine governments’, state governments supplement and improve the schemes of the central government and increase their power. Under the leadership of Shri Shivraj Singh Chouhan, Madhya Pradesh has shed the image of BIMARU state long ago, said the Prime Minister.

Talking about the rapid delivery in government schemes under the present regime, the Prime Minister pointed out the aberration in the earlier government systems. He said that they used to ask question about the poor and used to reply themselves without taking beneficiaries into the consideration. It was thought that that the poor people have no use for facilities like bank accounts, road, gas connection, toilet, piped water, loans. This false narrative kept the poor deprived for a very long time. The Prime Minister said like poor people, current leadership has also come up through difficult circumstances and understand the situation. In the recent years, real and meaningful efforts are being undertaken to strengthen and empower the poor. Today roads are reaching every village, new employment opportunities are emerging, access to markets have become easy for farmers and the poor is able to reach hospital in time in the event of illness.

On the National Handloom Day today, the Prime Minister recalled that in 1905, on 7th August, Swadeshi Movement was launched.  He emphasized that a big campaign to empower the rural, poor and tribal sections is underway in the country and this campaign is to encourage and promote our handicraft, handloom, workmanship in textiles. This is a movement to get vocal for local, with this feeling National Handloom Day is celebrated, he said. Referring to Khadi, the Prime Minister said that Khadi that was forgotten has emerged as a vibrant brand today.  “As we move forward in the journey of 100 years of independence, we have to strengthen the spirit for Independence in Khadi”, the Prime Minister said. He exhorted the people to buy some local handicraft product during the upcoming festivals.

While Concluding the Prime Minister cautioned against forgetting about Corona during festivals. He strongly emphasized the need for stopping the third wave of the pandemic and asked the people to follow all the measures of precaution. “ He have to take a pledge of healthy India and a prosperous India”, Shri Modi concluded.

The Prime Minister had recently interacted with PMGKAY beneficiaries in Gujarat and Uttar Pradesh also.