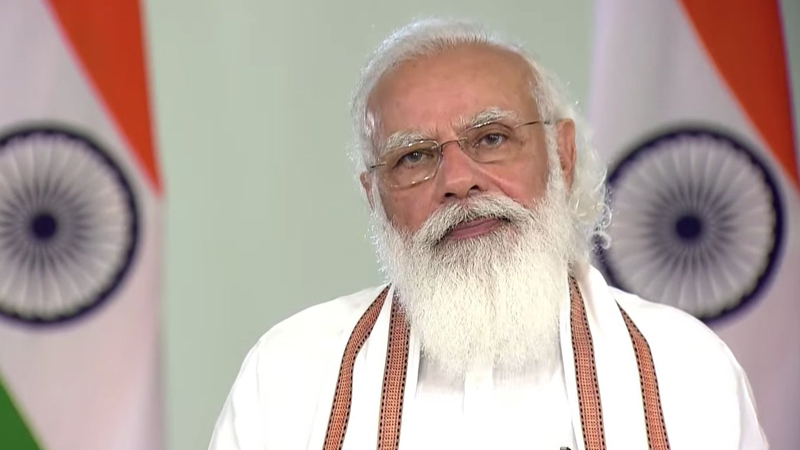 Addressing the event, the Prime Minister said August 5 has become very special for India. It was on 5th August, 2 years ago, the country had further strengthened the spirit of Ek Bharat, Shreshtha Bharat by abrogating Article 370,  making every right and facility available to every citizen of Jammu and Kashmir. The Prime Minister also mentioned, on August 5, Indians took the first step towards the construction of a grand Ram temple after hundreds of years. Ram temple is being constructed at a rapid pace in Ayodhya today.

Continuing with the importance of the date the Prime Minister talked of  enthusiasm and excitement brought today, by re-establishing our pride in hockey by the resurgent youth of the country on the Olympic grounds.

The Prime Minister lamented that on one hand our country, our youth are achieving new achievements for India, they are scoring goals for victory, while there are some people in the country who are engaged in self-goal for political selfishness. He added that they are not concerned with what the country wants, what the country is achieving, how the country is changing. The Prime Minister continued that this great country cannot become hostage to such selfish and anti-national politics. No matter how much these people try to stop the development of the country, this country is not going to be bound by them. The country is progressing rapidly on every front, challenging every difficulty, he said.

To illustrate this new spirit, The Prime Minister enumerated many recent records and achievements of Indians. Apart from Olympics, Shri Modi also talked of upcoming landmark 50 crore vaccination, record GST collection of 1 lakh 16 thousand crore  in the Month of July signaling new momentum in the economy. He also pointed out an unprecedented monthly agricultural export figure of 2 lakh 62 crore. This is the highest figure in post Independence India, catapulting India into top-10 agri-export countries. The Prime Minister also talked of the trial of the first Made in India aircraft carrier Vikrant, completion of construction of the highest motorable road in the world in Ladakh and launch of e-Rupi.

The Prime Minister criticized the opposition that those who are worried only for their position cannot stop India now. New India is ruling the world by winning medals not ranks. He added that the path to move forward in the new India will not be determined by family name, but by hard work. India’s youth has firm belief that both they and India are on the move.

Talking about the pandemic, the Prime Minister noted that in the past, when such a big crisis hit the country, then all the systems of the country were shaken badly. However, today in India, every citizen is fighting this pandemic with full force. The Prime Minister dwelled at length on the efforts to deal with the once in a century crisis. Augmentation of medical infrastructure,  world’s largest free vaccination programme, campaign to fight starvation among the vulnerable section, such programmes received investment of lakhs of crore rupees and India is moving ahead successfully.  Infrastructure products did not stop amidst the pandemic as exemplified by the highway, expressway projects, dedicated freight corridor and defence corridor in Uttar Pradesh.

The Prime Minister said the double engine government has ensured that the schemes made for the poor, downtrodden, backward, tribals are implemented expeditiously. He cited PM Svanidhi Yojana as a great example of this.The Prime Minister also elaborated on the measures taken to mitigate the situation during the pandemic. An effective strategy kept the cost of food items in control, Suitable measures were undertaken to keep the supply of seeds or fertilizers for farmers as a result, the farmers gave record production and the government also made record procurement under MSP. He also praised the Uttar Pradesh Chief Minister for record MSP procurement in UP. In UP the number of farmers benefited from MSP doubled during the past year. In UP, more than 24 thousand crore rupees were deposited directly in the account of 13 lakh farmer families as price of their produce. In Uttar Pradesh 17 lakh families have been allotted houses, lakhs of poor families got toilets, One half  free gas and lakhs of  electricity connections. 27 lakh households have received piped water in the state, the prime Minister informed.

The Prime Minister remarked that in the past decades, Uttar Pradesh was always seen through the prism of politics. It was not even allowed to discuss how UP can play a better role in the development of the country. The Prime Minister noted that the double engine government has changed the way we look at UP’s potential from a narrower vision. The confidence that UP can become the powerhouse of India’s growth engine has been born in recent years, he said.

The Prime Minister concluded that this decade is the decade of Uttar Pradesh to make up for the shortfall in the last 7 decades. This work cannot be done without adequate participation of the youths in UP, daughters, poor, downtrodden and backward in UP and giving them better opportunities.