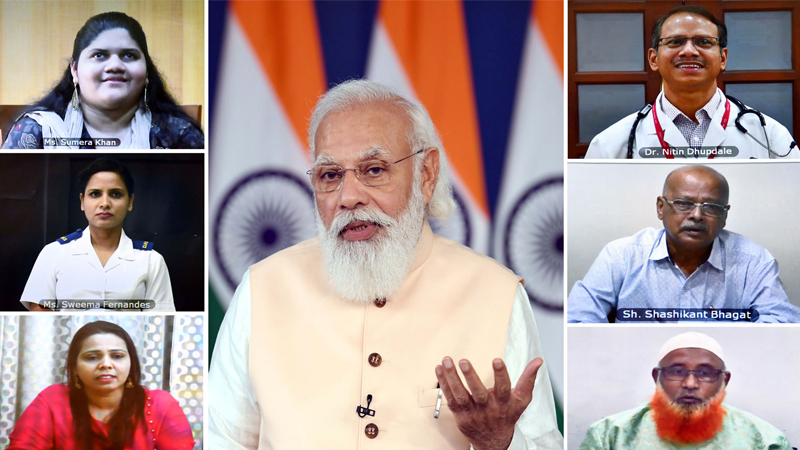 The Prime Minister,  Shri Narendra Modi interacted with healthcare workers and beneficiaries of the COVID vaccination programme in Goa through a video conference on the completion of 100% first dose coverage for the adult population in Goa.

Interaction with healthcare workers and beneficiaries

During the interaction, the Prime Minister enquired from Dr Nitin Dhupdale, Lecturer in Goa Medical College, how he convinced people to take COVID vaccines. He also discussed the difference between the COVID vaccination campaign and the earlier campaign. Dr Dhupdale praised the mission campaign mode of this particular campaign. Criticizing the opposition party, PM wondered how after vaccinating 2.5 crore people there were reactions from the opposition party instead of the vaccinated people. The Prime Minister lauded doctors and other Corona warriors for the completion of 100% first dose coverage for the adult population in Goa. He said that this is an inspiration for the entire world.

While interacting with Ms Sweema Fernandes, the Prime Minister asked what all enquiries she made while people came to her for vaccination. She explained the stages of maintaining the cold chain.  He also enquired how they maintained the cold chain for the vaccines. He inquired about the steps taken by them to achieve zero wastage of vaccines. The Prime Minister praised her for doing her duties despite her family commitments and thanked all the families of the corona warriors for their efforts.

While interacting with Shri Shashikant Bhagat, the Prime Minister recalled how he interacted with his old acquaintance on his birthday yesterday. He narrated that when asked about his age, the Prime Minister said ‘Abhi 30 baaki hain’ (30 more to go). Shri Modi advised 75-year-old Shri Bhagat not to dwell on 75 years but should focus on 25 years to come. He enquired about any difficulties faced by him during vaccination. Shri Bhagat expressed his satisfaction with the preference given to the senior citizens. He also dispelled the fears of the side effects of vaccines, as he is a diabetic and did not face any side effects. The Prime Minister praised Shri Bhagat, a retired sales tax officer for his social service and said that the government is committed to enhancing the ease of living including in the sphere of taxation.

The Prime Minister enquired Ms Sweety SM Vengurlekar how she organized Tikka Utsav in remote areas. He asked about the planning that went into organizing the Utsav. The Prime Minister emphasized that the focus was on making it easy for the citizens during the pandemic as far as possible. He asked for proper documentation and dissemination of the logistics involved in such a massive exercise.

The Prime Minister enquired visually challenged beneficiary Ms Sumera Khan about her experience of vaccination. The Prime Minister praised Ms Khan for her achievements in academics and wished her well for her aspirations of becoming an IAS officer. Shri Modi lauded the Divyang citizens of the country for inspiring the lives that they are leading.

Speech of the Prime Minister

Addressing the gathering, the Prime Minister lauded the people of Goa for achieving  Anant Sutr’ (Protection) during the auspicious Ganesh Utsav season. He expressed happiness for every eligible person in Goa getting at least one dose of the vaccine. “This is a major milestone in the fight against Corona. Every achievement of Goa that epitomises the concept of El Bharat -Shreshth Bharat fills me with great joy”, he said.

The Prime Minister remembered the services of Shri Manohar Parikkar on this day of major achievements.

The Prime Minister remarked that in the last few months, Goa has fought bravely with natural calamities like heavy rains, cyclones, floods. He praised all the corona warriors, health workers and Team Goa for maintaining the pace of corona vaccination amidst these natural calamities.

The Prime Minister commended the kind of coordination that Goa has shown in dealing with social and geographical challenges. The pace of vaccination in Canacona sub-division, which is located in the remotest parts of the state, sets an example for the rest of the state. “Goa has shown the great results of ‘Sabka Saath, Sabka Vikas, Sabka, Vishwas and Sabka Prayas.” he said.

The Prime Minister struck an emotional chord and said that I have seen many birthdays and have always been indifferent to that but, in all my years, yesterday was a day that made me deeply emotional.”  Yesterday’s occasion was made extra special by the efforts of the country and corona warriors. He praised the compassion, service and sense of duty of the team and people for vaccinating 2.5 crore people. “Everyone cooperated fully, people connected this with service. It was their compassion and duty that made this feat of 2.5 crore vaccination in a day possible,” said a visibly moved Prime Minister.

The Prime Minister praised the contribution of the people of the medical field, those who are engaged for the last two years, without caring for their lives, are helping the countrymen in fighting Corona, for the record vaccination yesterday. People associate it with service. It is his compassion and duty that has been able to administer 2.5 crore vaccine doses. The Prime Minister informed that Himachal, Goa, Chandigarh and Lakshadweep have completed the first dose for the eligible population. Sikkim, Andaman Nicobar, Kerala, Laddakh, Uttrakhand and Dadra Nagar haveli are not far behind.

The Prime Minister said that India prioritized tourist destinations in its vaccination efforts though this was not talked about earlier. It was important for our tourism destinations to open. The Central government has also recently taken several steps to encourage foreign tourists. It has been decided to give free visas to 5 lakh tourists visiting India, loan up to 10 lakh with a government guarantee to the stakeholders in the tourism sector and loan up to 1 lakh for registered tourist guides have been instituted, the Prime Minister informed.

The Prime Minister said that the ‘double engine government’ is powering the efforts of making the Goan tourism sector more attractive and giving more facilities to farmers and fishermen of the state. Mopa greenfield airport and 6 lane highway with the allocation of 12 thousand crore, Zuari bridge connecting North and South Goa to be inaugurated in few months are enhancing connectivity in the state.

Shri Modi noted that Goa has taken a pledge of Swayam Poorna Goa to attain AatmNirbharta in Amrit Kaal and has started manufacturing more than 50 components. He underlined Goa’s achievements in toilet coverage, cent per cent electrification, and the great effort for ‘Har Ghar Jal’ campaign. The country has connected 5 crore households with piped water in 2 years and Goa’s efforts in this direction show the state’s clear priority for good governance and ease of living. The Prime Minister also listed Goa’s efforts in providing ration to poor families, free gas cylinder, distribution of PM Kisan Samman Nidhi, expansion of Kisan Credit Cards in mission mode during pandemic and Svanidhi scheme benefits to street vendors. Calling Goa a state of boundless possibilities, the Prime Minister said “Goa is not just a state of the country but also is a strong marker of Brand India”.