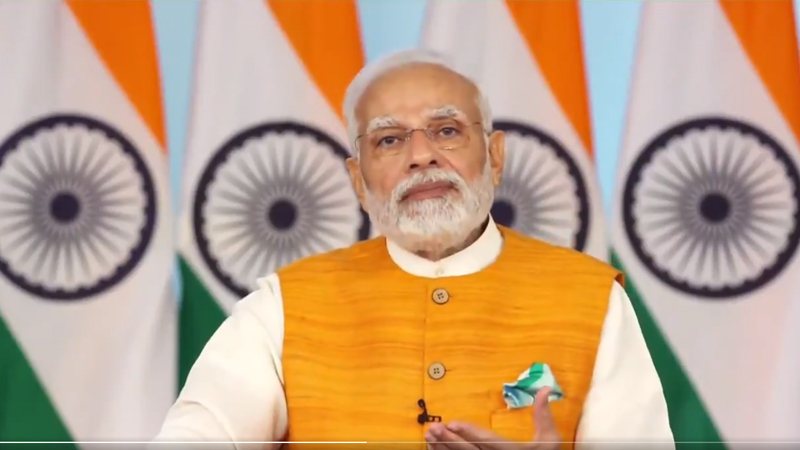 The Prime Minister interacted with Shri Damor Lalabhai Somabhai from Mahisagar and inquired if his cancer treatment went through well. The Prime Minister expressed delight that Shri Damor’s treatment was covered by the Ayushman Bharat scheme and he did not have to spend a single penny. He also urged Shri Damor to take a vow to quit tobacco and asked him to spread awareness about the scheme.

Addressing the gathering, the Prime Minister expressed delight that such a mega event about public health is taking place just before Dhanteras and Diwali. He noted the coincidence that Dhanteras is at hand and Lord Dhanvantari who is considered to be the originator of Ayurveda is worshipped on the occasion. Quoting the Shastras, the Prime Minister recited, “Arogyam Paramam Bhagyaam” and expressed happiness that under the leadership of Chief Minister Bhupendra Patel, an event of such massive scale was taking place to give Arogya Dhan to lakhs of people of Gujarat.

Referring to the spirit of ‘Sarve Santu Niramaya’ i.e. may all be free of diseases, the Prime Minister said Ayushman Yojana aims for health for all. The Prime Minister appreciated the enormity of the campaign of distributing 50 lakh cards to the people in the state. This bears testimony to the sensitivity of the Gujarat Government. “We have been hearing about health insurance in many countries of the world but India is going beyond that, ensuring health assurance”.

The Prime Minister also highlighted the changed political thinking and work culture. In the earlier governments, schemes for the benefit of the common man had become a mere formality. The money that was spent on these schemes was done keeping in mind a particular area and political interests. “It was necessary to change this situation and we took the lead in this change. Today when planning is done, we first study the condition of common citizens and study their needs”, he said. The Prime Minister continued “Our  schemes today directly address the needs of the common citizens”

The Prime Minister emphasized, “When the citizens of the country are empowered, then the country becomes powerful. That’s why we have focussed on empowering the common citizen, especially the women of the country”. He listed free gas connection, pucca houses, toilets, free ration, and piped water as examples of this approach. The Prime Minister informed that so far, around 4 crore poor patients have availed the benefit of Arogya under this scheme across the country. He further added that out of this, about 50 lakh poor patients are from Gujarat. Highlighting the commitment, the Prime Minister informed that the government has spent crores of rupees for the treatment of these beneficiaries. Noting that the money would have been spent from the pockets of the beneficiaries if they had to get treatment outside this scheme, the Prime Minister expressed satisfaction that half of the beneficiaries of Ayushman Bharat are my mothers and sisters. Shri Modi further added that these mothers and sisters used to hide their diseases in the interest of the family and suffer because they were afraid of the debt that might pile up due to the high cost of treatment. “Ayushman Bharat Yojana has also liberated poor mothers and sisters from this problem”, he added, “Simply speaking, an Ayushman card is a 5 lakh rupee ATM. This is an ATM card that will keep giving benefits every year” He further explained the benefit that if a person lives for 30-40 years, there will be a guarantee of 1.5-2 crore worth of treatment over that period. “Ayushman card will be your true friend, the biggest troubleshooter”, he added.

The Prime Minister recalled that as the Chief Minister, he had introduced Chiranjeevi, Balbhog and Khilkhilat schemes. Mukhyamantri Amritam was introduced many years ago in Gujarat. The introduction of PMJAY-MA will enable the people of Gujarat to avail benefit of free treatment even outside Gujarat.

As the then Chief Minister of Gujarat, Prime Minister had started the ‘Mukhyamantri Amrutam (MA)’ scheme in 2012 to shield poor citizens from the catastrophic costs of medical treatment and illness. In the year 2014, ‘MA’ Yojana was extended to cover families with an annual income limit of Rs. 4 lakh. The scheme was further extended to several other groups as well and later rebranded as Mukhyamantri Amrutam Vatsalya (MAV) Yojana.

Drawing from the experience of the success of this scheme, the Prime Minister launched the Ayushman Bharat Pradhan Mantri Jan Arogya Yojana (AB-PMJAY) in 2018 – the largest health insurance scheme in the world providing coverage of up to Rs. 5 lakh per family per year for primary, secondary and tertiary care hospitalization without any cap on the family size and age. With the launch of the AB-PMJAY, Gujarat integrated MA / MAV Yojana with the AB-PM-JAY scheme in 2019 with the name PMJAY-MA Yojana and the beneficiaries under MA/MAV and AB-PMJAY became eligible for co-branded PMJAY-MA cards.

During the programme, the Prime Minister kickstarted the distribution of these cards which was followed by 50 lakh colour-printed Ayushman cards were distributed to all the beneficiaries across Gujarat at their doorstep by National Health Authority empanelled agencies after performing e-KYC of beneficiaries.