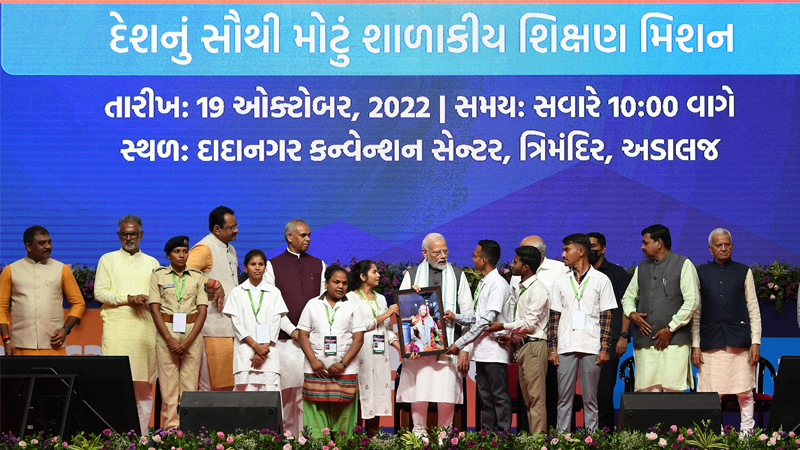 The Prime Minister, Shri Narendra Modi launched Mission Schools of Excellence at Trimandir, Adalaj, Gujarat today. The Mission has been conceived with a total outlay of 10,000 Crores. During the event at Trimandir, the Prime Minister also launched projects worth around Rs 4260 crores. The Mission will help strengthen education infrastructure in Gujarat by setting up new classrooms, smart classrooms, computer labs and overall upgradation of the infrastructure of schools in the State.

Addressing the gathering, the Prime Minister said that today, Gujarat is taking a monumental step towards the creation of the Amrit generation for the Amrit Kaal. “This occasion is going to serve as a milestone for a developed India, and for a developed Gujarat”, the Prime Minister said. He congratulated all citizens, teachers, youth and the upcoming generations of Gujarat for Mission Schools of Excellence.

Throwing light on the recent development of 5G technology, the Prime Minister remarked that although we have used the 1st to 4th generation of internet, 5G will usher in a transformation across India. “With every passing generation, technology has connected us to every small aspect of life”, Shri Modi continued, “Similarly we have seen different generations of schools.” Highlighting the capabilities of the 5G technology, the Prime Minister said that it will take the education system beyond smart facilities, smart classrooms and smart teachings and take it to the next level. “Our younger students can now experience the power of virtual reality and the internet of things in schools”, he said. The Prime Minister expressed happiness that through the Mission Schools of Excellence, Gujarat has taken the first and most significant step in the entire country. The Prime Minister congratulated the team of Chief Minister Bhupendra Patel for this monumental achievement.

The Prime Minister expressed delight at the array of changes that Gujarat has seen in the field of education in the past two decades. The Prime Minister recalled the dilapidated state of the education sector in Gujarat and informed that 20 out of 100 children would never go to school. He further added that those students who did manage to get to school would drop out after 8th standard. He also pointed out that the condition of the girl children, who were stopped from attending school, was even worse than the rest. Remarking on the paucity of educational centres in tribal areas, the Prime Minister pointed out that there were no plans in place for science education at all. Shri Modi underlined, “In these two decades, the people of Gujarat have shown the transformation of the education system in their state.” The Prime Minister informed that in these two decades, more than 1.25 lakh new classrooms were built in Gujarat, and more than 2 lakh teachers were recruited. “I still remember the day when programs like Shala Praveshotsav and Kanya Kelavani Mahotsav were started. The effort was that when the son and daughter go to school for the first time, it will be celebrated like a festival”, Shri Modi exclaimed.

The Prime Minister also recalled ‘Gunotsav’, a festival focussing on the quality of education. In this aptitude, the skills and abilities of the students were evaluated and proper solutions were suggested. He expressed happiness that a more advanced technology-based version of the ‘Gunotsav’ is functioning in Vidiya Sameeksha Kendra in Gujarat. “Gujarat has always been part of some unique and big experiments in the field of education. We established the Institute of Teachers Education, the first teacher training university in Gujarat” he added.

Recalling the time when the Prime Minister served as the Chief Minister of state, he informed that he travelled from one village to another and requested all the people to send their daughters to school. “The result has been that today almost every son and daughter in Gujarat has started reaching school, and going to college after school.” He expressed his appreciation for the parents also who paid heed to his requests for sending their children to school.

The Prime Minister informed that even a decade ago, TV had reached 15,000 schools in Gujarat apart from computer-aided learning labs in more than 20 thousand schools, and many such systems had become an integral part of the schools of Gujarat many years ago. Underlining the crucial role of technology in the field of education, the Prime Minister highlighted that today in Gujarat more than 1 crore students and more than 4 lakh teachers register online attendance. He further elaborated that today 20 thousand schools in Gujarat are going to enter the 5G era of education.

The Prime Minister threw the spotlight on the projects involved under the Mission Schools of Excellence and informed that 50 thousand new classrooms and more than one lakh smart classrooms are going to be built in these schools. The Prime Minister further added that these schools will not only have a modern, digital and physical infrastructure, but it is also a campaign to make a big difference in the lives of children and their education. “Here work will be done in every aspect to enhance the capability of the children”, he said

The Prime Minister said that all these measures will be greatly benefited from the advent of 5G. As it will help in making the best content, pedagogy and teacher available to everyone, including in remote areas. “Variety and flexibility of educational options will bring the new National Education Policy to the ground”, he said. The Prime Minister also talked about the upcoming 14.5 thousand PM-SHRI schools which will be model schools for the implementation of the National Education Policy. 27 thousand crore rupees will be spent on the scheme.

The Prime Minister explained, “The new National Education Policy is an attempt to free the country from the mentality of slavery and promote talent and innovation.” The Prime Minister lamented that the knowledge of the English language was taken as a measure of intelligence. Whereas language is just a medium of communication. But for so many decades, language had become such a hindrance that the country could not get the benefit of the talent pool in the villages and poor families. “Now this situation is being changed. Now students have started getting the option of studying science, technology, and medicine in Indian languages ​​too. Efforts are underway to make courses in several Indian languages ​​including Gujarati,”, the Prime Minister said. He also reiterated the ‘leaving nobody behind’ spirit of the New National Education Policy as this is the time for ‘sabka prayas’ for a developed India.

Recalling the contribution of India’s forefathers in the field of science and knowledge the Prime  Minister remarked, “Education has been the pivot of India’s development since ancient times”. He explained that India has been a supporter of knowledge by nature and it was our ancestors who built the world’s best universities and established the largest libraries hundreds of years ago. The Prime Minister lamented the period when India was invaded and a campaign to destroy this wealth of India took place. The Prime  Minister interjected, “We have not abandoned our strong insistence on education.” This is the reason that even today, in the world of knowledge and science, India has a different identity in innovation. “In the Azadi Ka Amrit Kaal, there is an opportunity to get back its ancient prestige”, Shri Modi said.

In concluding the address, the Prime Minister highlighted India’s immense potential to become a great knowledge economy in the world. He explained, “In the 21st century, I have no hesitation in claiming that most of the innovations related to science, most of the innovations related to technology, will be in India.” The Prime Minister also pointed out that a great opportunity is on the cards for Gujarat. “Till now Gujarat is recognized for trade and business, it is for manufacturing. But in the 21st century, Gujarat is developing as a knowledge hub of the country, as an innovation hub. I am sure that the Mission Schools of Excellence will elevate this spirit.”, the Prime Minister concluded.