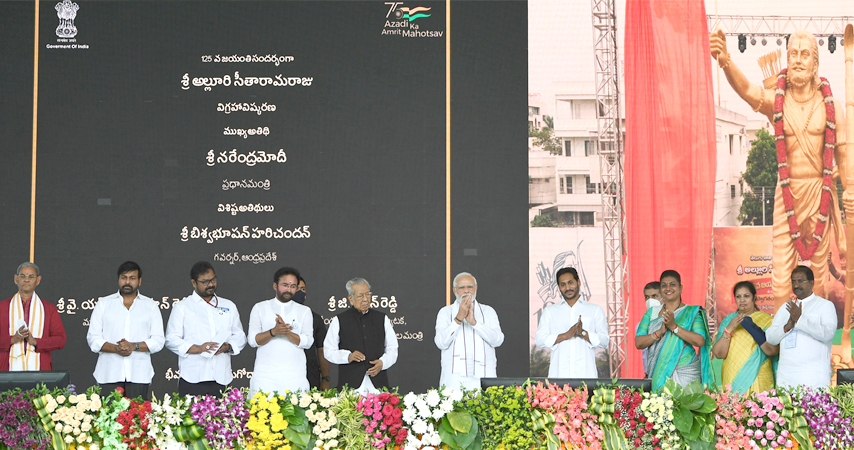 Addressing the gathering, the Prime Minister said that he is feeling privileged at getting an opportunity to salute the great land of Andhra Pradesh with such a rich legacy. He noted the confluence of major events like Azadi ka Amrit Mahotsav, 125th birth anniversary of Alluri Sitarama Raju and 100 years of Rampa Rebellion. The Prime Minister bowed to the memory of the great “Manyam Veerudu” Alluri Sitarama Raju and paid him tributes on behalf of the entire country. He also expressed happiness at meeting the members of the family of the great freedom fighter. The Prime Minister also paid tributes to the ‘Adivasi Parampara’ and the freedom fighter that emerged from the tradition of Andhra Pradesh.

The Prime Minister informed that the 125th birth anniversary of Alluri Sitarama Raju Garu and the 100th anniversary of Rampa Kranti will be celebrated throughout the year. Restoration of his birth place at Pandrangi, renovation of Chintapalli police station, construction of Alluri Dhyana Mandir at Mogallu, these works are symbols of the spirit of Amrit Mahotsav, he said.The Prime Minister said that today’s programme reflects the pledge of making everyone aware of the heroic deeds of our freedom fighters.

The Prime Minister noted that the freedom struggle is not just a history of a few years, few areas, or of a few people. This history is the history of sacrifice, tenacity and sacrifices of every nook and corner of India. “History of our freedom movement is a symbol of the strength of our diversity, culture and of our unity as a nation”, he added.

Terming Alluri Sitarama Raju a symbol of India’s culture, tribal identity, valour, ideals and values, the Prime Minister remarked that from the birth of Sitaram Raju Garu to his sacrifice, his life journey is an inspiration to all of us. He dedicated his life for the rights of tribal society, for their happiness and sorrow and for the freedom of the country. “Alluri Sitarama Raju represents the spirit of ‘Ek Bharat Shreshtha Bharat’ that has been uniting the country in one thread of unity”, the Prime Minister said.

The Prime Minister said that India’s spiritualism gave Alluri Sitarama Raju a sense of compassion and kindness, a sense of identification and equality for the tribal society, knowledge and courage. Noting the youth of Alluri Sitarama Raju and those who laid down their lives at the Rampa Rebellion, the Prime Minister emphasised that their sacrifice is a source of energy and inspiration for the entire nation even today. “Youth of the country led the freedom struggle. Today, this is the best opportunity for the youth to come forward for the development of the country”, the Prime Minister said. He pointed out that “today, there are new opportunities, avenues, thought processes and possibilities in New India today and our youth is taking up the responsibility of realising these possibilities.”

The Prime Minister said Andhra Pradesh is the land of heroes and patriots. Here there were freedom heroes like Pingali Venkayya, who prepared the flag of the country. This is the land of heroes like Kaneganti Hanumanthu, Kandukuri Veeresalingam Pantulu and Potti Sriramulu. The Prime Minister urged that today, it is the responsibility of all of us countrymen to fulfil the dreams of these fighters in Amrit Kaal. Our new India should be the India of their dreams. An India – in which the poor, farmers, labourers, backward, tribals have equal opportunities for all. The Prime Minister stated that, during the last 8 years, the government has worked relentlessly for the welfare of the tribal community of the country.

The Prime Minister said for the first time since independence, tribal museums are being set up to showcase the tribal pride and heritage in the country. “Alluri Sitarama Raju Memorial Tribal Freedom Fighters Museum” is also being built in Lambasingi, Andhra Pradesh. Similarly 15 November, the birthday of Bhagwan Birsa Munda has been demarcated as Rashtriya Janjatiya Gaurav Diwas. The Prime Minister said that the foreign rulers perpetrated maximum atrocities on the tribal community and tried to destroy their culture.

The Prime Minister said today tribal art and skills are getting a new identity through the Skill India Mission. ‘Vocal for Local’ is making tribal art skills a means of income. Decades old laws which prevented tribal people from cutting forest produce like bamboo, we changed them and gave them rights on forest produce, he said. Similarly, the number of forest products for MSP procurement increased from 12 to more than 90. More than 3000 Van Gan Vikas Kendra and More than 50,000 Van Gana Self Help Groups are connecting tribal products and art with modern opportunities. Aspirational Districts Schemes will greatly benefit tribal districts and, on the education front, more than 750 Eklavya Model schools are being established and education in Mother tongue is being promoted under National Education Policy.

The Prime Minister said “Manyam Veerudu” Alluri Sitarama Raju, during his struggle with the British, showed that – ‘Dum hai to mujhe rok lo’- Stop me if you can. Today the country is also facing the challenges before it. With the same courage, 130 crore countrymen, with unity and strength, are telling every challenge – ‘Dum hai to hamain rok lo’, the Prime Minister concluded.

Background of the event

As part of Azadi Ka Amrit Mahotsav, the Government is committed to giving due recognition to the contribution of freedom fighters and making people across the country aware of them. As part of the endeavour, Prime Minister Shri Narendra Modi launched the year-long 125th birth anniversary celebration of the legendary freedom fighter, Alluri Sitarama Raju, in Bhimavaram. Born on 4th July 1897, Alluri Sitarama Raju is remembered for his fight against the British, in order to safeguard the interests of the tribal communities in the Eastern Ghats region. He had led the Rampa rebellion, which was launched in 1922. He is referred to as “Manyam Veerudu” (Hero of the Jungles) by the local people.

The government has planned a series of initiatives as part of the year-long celebration. The birthplace of Alluri Sitarama Raju at Pandrangi in Vizianagaram district and Chintapalli Police Station (to mark 100 years of Rampa Rebellion – the attack on this police station marked the beginning of Rampa Rebellion) will be restored. Government has also approved the construction of Alluri Dhyana Mandir at Mogallu with a statue of Alluri Sitarama Raju in Dhyana Mudra, depicting the life story of the freedom fighter through mural paintings and AI-enabled interactive system.