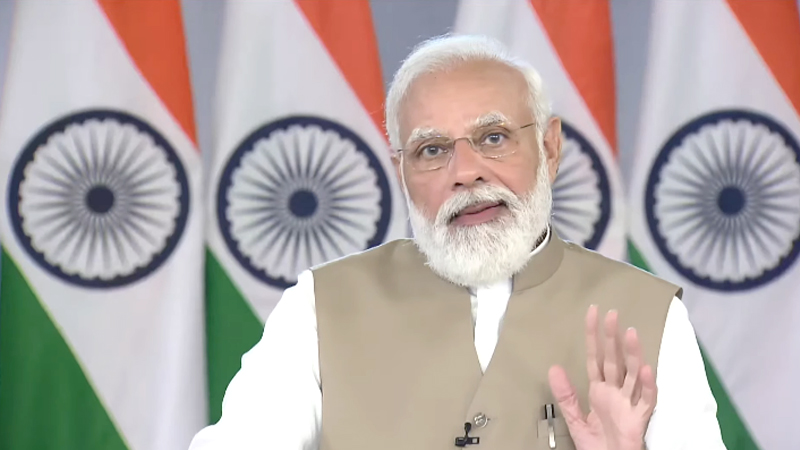 The Prime Minister,  Shri Narendra Modi laid the foundation stone and dedicated various National Highway and Road projects to the nation through video conference. Union Road Transport & Highways Minister, Governor  and Chief Minister Maharashtra were among those present on the occasion.

Speaking on the occasion, the Prime Minister said, today the foundation stone of Sreesanth Dnyaneshwar Maharaj Palkhi Marg and Sant Tukaram Maharaj Palkhi Marg has been laid here. The construction of Sreesanth Dnyaneshwar Maharaj Palkhi Marg will be done in five phases and the construction of Sant Tukaram Maharaj Palkhi Marg will be completed in three phases. He said that these projects will lead to better connectivity with the region and paid his respect to the devotees, saints  and Bhagvan Vitthal for their blessings for the projects. He said that faith in Bhagavan Vitthal remained unwavered throughout the turmoils of history and “even today, this Yatra is one of the world’s oldest mass yatras and is seen as a people’s movement, Which teaches us that there may be different paths, different methods and ideas, but we have the same goal. In the end all sects are ‘Bhagwat Panth,  It is a symbol of India’s eternal knowledge that does not bind our faith, but liberates”, said the Prime Minister.

The Prime Minister noted that the specialty of India is that from time to time, in different regions, such great personalities kept emerging and showing the direction to the country. In the south there were Madhvacharya, Nimbarkacharya, Vallabhacharya, Ramanujacharya and in the west Narsi Mehta, Mirabai, Dhiro Bhagat, Bhoja Bhagat, Pritam were born. In the north there were Ramananda, Kabirdas, Goswami Tulsidas, Surdas, Guru Nanak Dev, Sant Raidas. In the east, the thoughts of saints like Chaitanya Mahaprabhu, and Shankar Dev enriched the country.

Commenting on the social significance of the Warkari movement, the Prime Minister singled out participation of  women in  the yatra with the same zeal as men as the key feature of the tradition. This is a reflection of the power of women in the country. ‘Pandhari ki wari’ symbolizes equality of opportunity. Warkari movement considers discrimination inauspiscious and this is it great motto, said the Prime Minister.

The Prime Minister wished for three blessings from the Warkari brothers and sisters. He talked about their unabated affectionation towards him. He requested the devotees to plant trees on the Palkhi Margs. Also requested for making arrangements for drinking water along this walkway and many pots should be made available on these routes. He also desired to see Pandharpur among the cleanest pilgrimage sites in India in future. He said this work will also be done through public participation, when the local people take the leadership of the cleanliness movement under their command, then only we will be able to realize this dream.

During the event, the Prime Minister also dedicated to the nation more than 223 Km of completed and upgraded road projects, constructed with an estimated cost of over Rs. 1180 crore at different National Highways for boosting connectivity to Pandharpur. These projects include  Mhaswad – Piliv – Pandharpur (NH 548E), Kurduwadi  –  Pandharpur  (NH 965C), Pandharpur – Sangola (NH 965C), Tembhurni-Pandharpur section of NH 561A and Pandharpur – Mangalwedha – Umadi  section of NH 561A.