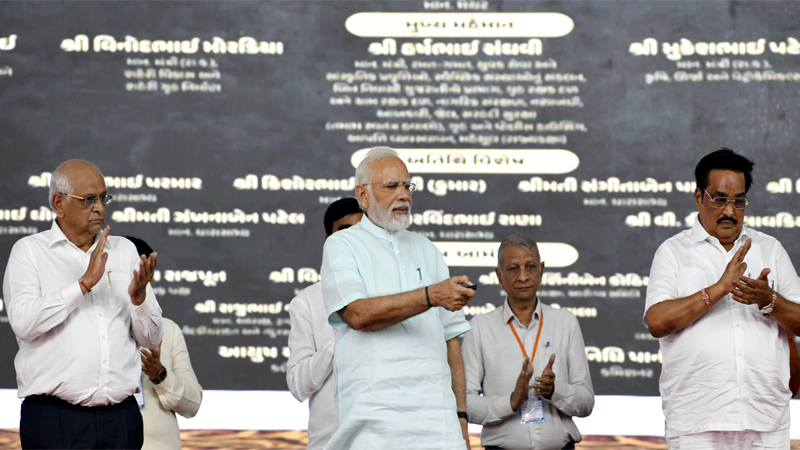 Addressing the gathering, the Prime Minister expressed delight upon getting the opportunity to inaugurate multiple projects as well as lay the foundation stone of upcoming projects in Surat on the auspicious occasion of Navratri. In a light-hearted manner, he added that in the land of such great cuisine, coming to Surat is a little daunting while a person like him is observing Navratri fast. The Prime Minister also expressed happiness that the work of 75 Amrit Sarovars is being carried out in full swing.  The Prime Minister remarked that the city of Surat is a wonderful example of both people’s solidarity and public participation. Highlighting the biggest feature of Surat, the Prime Minister said that it is a city that respects labour. “There will not be any region of India whose people do not live on the land of Surat- a kind of Mini Hindustan”, Shri Modi added.

Recalling the time during the early decades of this century, when 3 P i.e. public-private partnership was discussed in the world, the Prime Minister remarked that Surat is an example of 4 P. “4 P means people, public, private partnership. This model makes Surat special”, Shri Modi added. He said that today, Surat figures among the fastest growing cities in the world, a far cry from the days when the city’s name was defamed for epidemics and floods. He elaborated on the benefits of biodiversity park in the civic life of Surat.

Highlighting the positive effects after the formation of the double-engine government, the Prime Minister said that the construction of houses and other facilities provided to the poor and middle-class families of Surat has gone up significantly. Underlining the benefits derived from the Ayushman Bharat scheme, the Prime Minister pointed out that about 40 million poor patients have received free treatment in the country so far. The Prime Minister added, “More than 32 lakh patients are from Gujarat and about 1.25 lakh are from Surat.”

Remarking on Surat’s textile and diamond business, the Prime Minister noted that it sustains the lives of many families across the country. The Prime Minister further pointed out that when the DREAM City project is completed, Surat will develop into one of the safest and most convenient diamond trading hubs in the world. Underlining the infrastructure development in the city, the Prime Minister said that the road connectivity from the city to the airport reflects the culture, prosperity and modernity of Surat. The Prime Minister was quick to remark on the then Government in Delhi who didn’t pay much heed to the need for an airport in the city. “See today, how many flights operate from here, how many people land here every day”, the Prime Minister interjected. Shri Modi also recalled a similar situation that arose when the approval for Surat metro was required.

Highlighting the importance of logistics, the Prime Minister said that it is the people of Surat who know what it means to any business.  Remarking on the National Logistics Policy, the Prime Minister said that work is underway on a huge project on multi-modal connectivity. Hazira Ghogha RoPax ferry service is saving both time and money by reducing400 km road distance dramatically from 10-12 hours to 3-4 hours via RoPax. Giving an example of connectivity from Surat to Kashi and Eastern Uttar Pradesh, the Prime Minister said that truck loads of goods are transported, and now the railway and coastal departments have come up with unique innovations to boost the number of shipments. The Prime Minister explained, “ Railways has changed the design of its coaches in such a way that cargo can easily fit in it. One-ton containers have also been specially made for this. These containers are easily loaded and unloaded. After the initial success, now an attempt is being made to run a new train from Surat to Kashi. This train will take goods from Surat to Kashi.”

The Prime Minister commented on the changing identities of Surat from Diamond city, to Bridge city to now Electric vehicle city. The Prime Minister laid stress on the advent of electric vehicles in the city and said that Surat will also be known for electric vehicles very soon. Shri Modi remarked that as of now, the central government is helping governments to run electric vehicles across the country and Surat is a step ahead in this regard when compared to other cities in the country. “Today 25 charging stations have been inaugurated in Surat city and the foundation stone of the same number of stations has been laid. This is a big step towards setting up 500 charging stations in Surat in the near future.”

The Prime Minister, Shri Narendra Modi inaugurated Phase-I of road infrastructure works and the main entrance of Diamond Research and Mercantile (DREAM) City. DREAM City project has been launched with the vision to meet the growing demand for commercial and residential space to complement the rapid growth of the diamond trading business in Surat. The Prime Minister also laid the foundation stone of Phase II of the project.

The Prime Minister, Shri Narendra Modi laid the foundation stone of Biodiversity Park, which is being built in an area of over 87 hectares from Dr Hedgewar Bridge to Bhimrad-Bamrolli Bridge. The Prime Minister also inaugurated Khoj Museum at Science Centre in Surat. Built for children, the museum will have interactive displays, inquiry-based activities and inquisitiveness-based explorations.

The inauguration and foundation stone of these wide-ranging developmental projects reflect the commitment of the Prime Minister to develop world-class infrastructure, enhance urban mobility and improve multi-modal connectivity. It also showcases the continuous focus of his government on enhancing the ease of living of the common man.