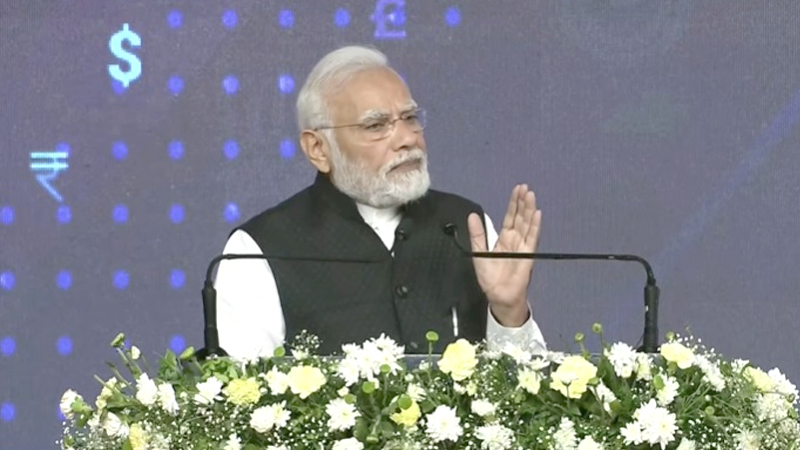 Addressing the gathering, the Prime Minister said this day is very significant for the growing economic and technological strength of India and also for the growing global confidence in the prowess of India. “Today, in GIFT City, the foundation stone of the International Financial Services Centers Authority – IFSCA headquarters building, has been laid. I believe, as grand as this building is in its architecture, it will also create unlimited opportunities to make India an economic superpower”, he said. The Prime Minister said that IFSC will promote innovation and will be an enabler as well as a catalyst for growth. Institutions and platforms launched today will help 130 crore Indians to get connected with the modern global economy. “India is now entering the league of Countries like the USA, UK and Singapore who are giving direction to global finance” he added.

Going back to his original concept of GIFT-city, the Prime Minister said GIFT-city is not just for business but the aspirations of the common man of the country are part of the vision of GIFT City. The vision of India’s future is connected in GIFT-City, and dreams of India’s golden past are also connected with this”.

The Prime Minister recalled that in 2008, when the world was facing an economic crisis and recession, there was an atmosphere of policy paralysis in India. “But, at that time Gujarat was taking new and big steps in the field of Fintech. I am glad that that idea has progressed so far today”, he said.

The Prime Minister noted that GIFT City is making a strong mark as a hub of commerce and technology. GIFT City celebrates both wealth and wisdom. He was also happy to see that through GIFT City, India is moving ahead with a strong stake in the service sector globally. He said that GIFT-city is a venue where wealth creation is happening and the best brains of the world are congregating and learning. ‘In a way, it is also a medium of reclaiming India’s glory in finance and business’, the Prime Minister said.

The Prime Minister said we have to remember that a vibrant fintech sector does not mean just an easier business climate, reforms and regulations. It is also a medium to give a better life and new opportunities to the professionals working in different fields.

He said that post independence, may be due to the impact of slavery and weak self confidence, the country kept shying away from the glorious legacy of business and finance and restricted its cultural, economic and other relations with the world. “However, now, ‘New India’ is changing this old way of thinking and today Integration is one of our most significant agenda. We are rapidly integrating with a global market and global supply chain”, he said. “GIFT-city is an important gateway to get connected with India as well as global opportunities. When you get integrated with GIFT-city, you get integrated with the entire world”, he said.

The Prime Minister said today India is one of the largest economies of the world. So in future, when our economy will be bigger than it is today, we have to be ready for it now. For this we need institutions that can cater to our present and future role in the global economy. India International Bullion Exchange – IIBX, he said, is a crucial step in that direction. He mentioned the role of the role of gold in ensuring economic empowerment of the Indian women. He said that India’s identity should not remain limited to just a big market but it should be a ‘market maker’. He added “On the one hand, we are bringing in global capital for local welfare. On the other hand, we are also harnessing local productivity for global welfare.”

The Prime Minister said that India’s strength goes beyond giving good returns to investors. He elaborated “At a time when global supply chains are plagued with uncertainty and the world is apprehensive of this uncertainty, India is assuring the world of quality products and services.” The Prime Minister further said “I have many expectations from the new institutions of new India, from the new systems and I have full faith in you. Today in the 21st century, finance and technology are linked to each other. And when it comes to technology, science and software, India also has an edge as well as experience too.” The Prime Minister, while underlining India’s leadership in fintech, asked the GIFT-city stakeholders to focus on fintech. “I expect all of you to target new innovations in Fintech and GIFT IFSC emerges as fintech’s global laboratory.”

Second expectation expressed by the Prime Minister was about GIFT IFSC to become a gateway to global debt and equity capital for sustainable and climate projects. Thirdly, IFSCA should work for financial innovations in aircraft leasing, ship financing, carbon trading, digital currency, and IP rights to investment management. The Prime Minister also said “IFSCA should also make regulation and operation cost competitive not only in India but also in comparison to countries like Dubai and Singapore. “Your aim should be to become a leader in regulations, set high standards for rule of law, and emerge as the favourite arbitration center of the world”

The Prime Minister noted that in the last 8 years, the country has witnessed a new wave of financial inclusion. Even the poorest of the poor are joining formal financial institutions today. Today, when a large population of ours has joined finance, it is the need of the hour that government organisations and private players, together, step forward, he said. The Prime Minister called for financial literacy above basic banking as people wish to invest for growth.

IIIBX will facilitate efficient price discovery with the assurance of responsible sourcing and quality, apart from giving impetus to the financialisation of gold in India. It will empower India to gain its rightful place in the global bullion market and serve the global value chain with integrity and quality. IIBX also re-enforces the commitment of the Government of India towards enabling India to be able to influence global bullion prices as a principal consumer.

NSE IFSC-SGX Connect is a framework between NSE’s subsidiary in the GIFT International Financial Services Centre (IFSC) and Singapore Exchange Limited (SGX). Under Connect, all orders on NIFTY derivatives placed by members of Singapore Exchange will be routed to and matched on the NSE-IFSC order matching and trading platform. Broker-Dealers from India and across international jurisdictions are expected to participate in large numbers for trading derivatives through Connect.  It will deepen liquidity in derivative markets at GIFT-IFSC, bringing in more international participants and creating a positive impact on the financial ecosystem in the GIFT-IFSC.