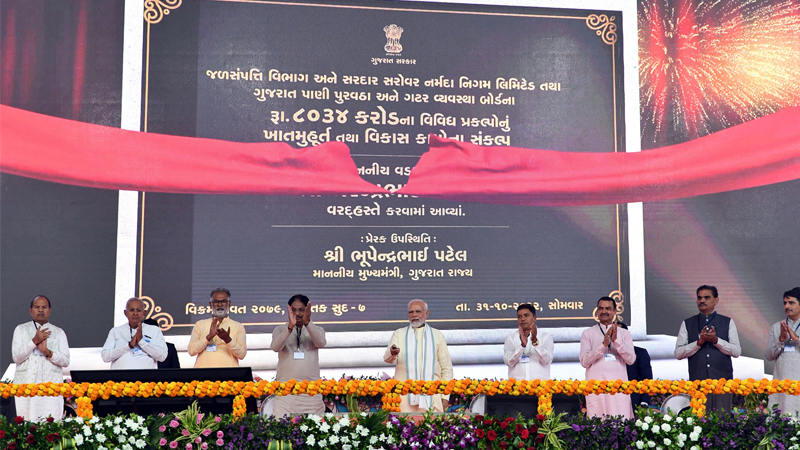 The Prime Minister, Shri Narendra Modi laid the foundation stone of projects worth over Rs 8000 crores in Tharad, Banaskantha in Gujarat today.

The Prime Minister remarked that Gujarat and the entire nation is swallowed by grief from the loss of lives after the tragedy in Morbi yesterday. In this hour of grief all of us are with the families of the victims. He said that the Chief Minister and his team are whole-heartedly working for the relief work. “Last night Bhupendrabhai reached Morbi directly from Kevadiya and took charge of the relief work. I am in constant touch with him and the officials involved in the relief work. NDRF team and personnel from armed forces have reached. I assure people of Gujarat from the land of AmbaJi that no stone will be left unturned in the relief work ”, he said.

The Prime Minister mentioned that he was in two minds whether he should cancel this event or not, but knowing the significance of water supply projects in Banaskantha and the love of the people, he emboldened his spirit and came forward to inaugurate these projects worth more than Rs 8000 crores. He underlined that these projects will help in irrigation facilities to more than six districts of Gujarat including Banaskantha, Patan and Mehsana. Recalling the tough times that the state has faced in the past, the Prime Minister said that it is the undying spirit of the people of Gujarat that gives them the strength to deal with any adversity with whatever resources they have. “Banaskantha is a living and breathing example of this”, Shri Modi said as he highlighted the development works that have transformed the district today.

The Prime Minister recalled when thousands of districts of North Gujarat had fluoride contaminated water and said that the issues related to water have a major effect on agricultural life in the region. He informed, the condition was such that no landowner would find a buyer if they wanted to sell their land. The Prime Minister interjected, “Since the time I have become a ‘sevak’ of the land, it was our government that identified the problems of the region and worked towards completing them with utmost dedication and sincerity.” “We focussed on water conservation, built check dams and ponds”, Shri Modi said. The Prime Minister gave examples of Sujalam-Sufalam Yojna, Wasmo Yojna and Pani Samitis. He also underlined the crucial role played by women which resulted in the entire North Gujarat region including Kutch flourishing with drip irrigation and ‘per drop more crop’ model while giving a boost to agriculture, horticulture as well as tourism in the region. “One hand we have the Banas Dairy while on the other hand a 100 MW Solar Power Plant, we have  accomplished the goal of getting tap water to every house in the region” the Prime Minister added. Shri Modi underlined that drip irrigation and micro irrigation techniques have drawn the attention of the entire country towards Banaskantha and also led to world wide recognition. The Prime Minister remarked, “Today, Banaskanta is writing its own chapter in the history of development.” He informed that 4 lakh hectares of land in Banaskantha are dedicated to using drip and micro irrigation that has resulted in the water table not getting depleted further. “This is not just benefiting you but also securing the lives of future generations” he said. Highlighting the Sujalam-Sufalam Yojna, the Prime Minister praised the people of the region who have silenced all the critics with their effort and dedication and made the Sujalam-Sufalam Yojna a grand success.

Highlighting the work done in the last 19-20 years, the Prime Minister informed that long recharge canals of hundreds of kilometers have been built under the Sujalam-Sufalam scheme. He further added that village ponds have also been revitalized due to the laying of the pipeline and rising levels of groundwater. The Prime Minister further informed that the two pipelines that are about to be built will benefit more than 1 thousand village ponds. Elaborating the project plans, the Prime Minister explained that the pipeline is being extended up to Mukteshwar Dam and Karmavat Talab  and water is being lifted with the help of electric pumps at places with high altitudes. The Prime Minister further added that a distribution canal is being constructed from the main canal of Narmada that will benefit dozens of villages in Tharad, Vav and Suigaon talukas. “Many villages in 6 talukas of Patan and Banaskantha will also benefit from the Kasra-Dantiwada pipeline. In the coming time, water from Narmada river will come into Mukteshwar dam and Karmavat pond. This will benefit Vadgam in Banaskantha, Siddhapur in Patan and Kheralu taluka of Mahesana” the Prime Minister noted.

“Offering water to someone is considered a pious act”, the Prime Minister exclaimed, “The one who gets water is bearer of nectar and that nectar makes one invincible. The people bestow their blessings on that person. That is the importance of water in our lives’ ‘ Throwing light on the developments made in this regard, the Prime Minister gave examples of new possibilities in agriculture and animal husbandry. He also highlighted the flourishing food-processing industry due to increased output of the land. Shri Modi also recalled laying the foundation stone of a potato processing plant a few months back. “The central government is elaborating the scope of the food processing industry. Farmers are connecting producer unions and sakhi mandals with this sector”, the Prime Minister added. Be it building a cold storage plant or a food processing plant, the government is assisting these organisations with crores of rupees, he informed. The Prime Minister said that we are moving forward with a vision where the farmer is not just the owner of the pomegranate tree but also holds a share in the juice manufacturing unit. The Prime Minister also shed light on the Sakhi Mandals that are doing commendable work today manufacturing many products from fruits and vegetables to pickles, murabbas and chutneys. He also noted that the government has also doubled the limit of bank loans available to Sakhi Mandals to further develop the industry. “Van Dhan Kendras have been opened in tribal areas so that Sakhi Mandal of tribal women can make best products from forest produce”, he added.

The Prime Minister said that PM Kisan Samman Nidhi is proving of great benefit to the farmers. He also talked about the launch of Pan India common Brand name ‘Bharat’ for fertilizers for the farmers that has eliminated confusion among the farmers.  He also informed that the government is making the bag of urea available to the farmers for Rs 260 while international price is more than 2000 Rs.  Similarly, he expressed happiness that Banas Dairy footprint has extended to Uttar Pradesh, Haryana, Rajasthan, Odisha, Andhra Pradesh and Jharkhand. Schemes like Goabardhan, bio-fuel are enhancing the utility of livestock. “The government is continuously working to strengthen the dairy sector”, he added.

The Prime Minister also mentioned the growing role of regions like Banaskantha in the country’s security. Airforce Airport in Deesa and ‘Seema-Darshan’ in Nadabet are improving the quality of life in the region. He also informed about the expansion of NCC in the border district and the special focus on the border villages under the Vibrant Border Village programme.

Informing about the Smriti Van in the memory of Katch earthquake victims, the Prime Minister requested people and Banas Dairy management to encourage people to visit the memorial. “Every such work, which enhances the pride of the nation, increases the pride of Gujarat, is the commitment of the double engine government. Our strength lies with Sabka Saath, Sabka Vikas,  Sabka Vishwas and Sabka Prayas”, he added.

The Prime Minister, Shri Narendra Modi visited Tharad in Banaskantha and laid the foundation stone of projects worth over Rs. 8000 crores. Several projects related to water supply whose foundation stone was laid include the Kasara to Dantiwada Pipeline from the main Narmada Canal costing over Rs. 1560 crores. The project will augment the water supply and prove beneficial for farmers of the region. The Prime Minister also announced several projects including the strengthening of the Sujlam Suflam Canal, the extension of the Modhera-Moti Dau pipeline to Mukteshwar Dam-Karmavat Lake, and lift irrigation scheme for 11 villages of Santalpur Taluka, among others.