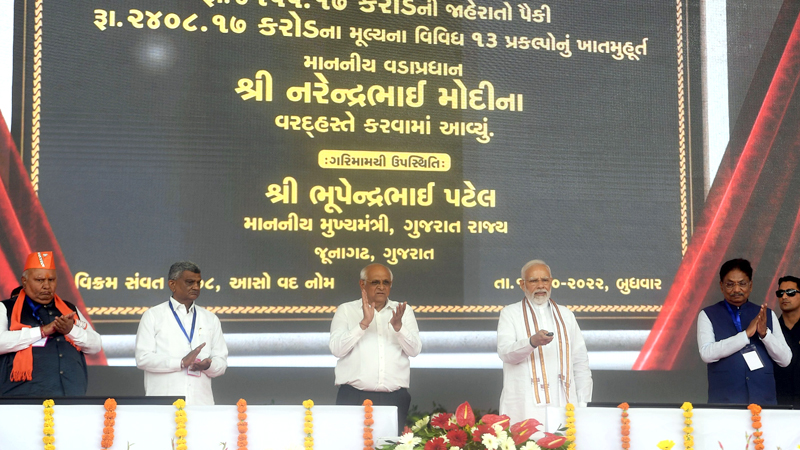 The Prime Minister termed the area comprising Junagadh, Gir Somnath and Porbandar as the tourism capital of Gujarat. He said the projects that are being planned today will create huge opportunities for employment and self-employment. “My chest swells with pride today”, the Prime Minister remarked and credited it to the people of Gujarat and their blessings. The Prime Minister highlighted that even after he left Gujarat to take up responsibilities at the Centre, it was the team of Chief Minister Bhupendra Patel who took care of Gujarat with the same set of values and traditions. “Today, Gujarat is developing at a rapid pace”, the Prime Minister said,

He recalled the tough times of drought and migration from the region. He said even nature helps the people who work with dedication and authenticity as in the last two decades climate adversities also got reduced. “With people’s blessing on the one hand and nature’s support on the other, it is a pleasure to spend one’s life in the service of people”, the Prime Minister said. Maa Narmada, the Prime Minister pointed out, was a distant place of pilgrimage, with the hard work of people, Maa Narmada has reached villages of Saurashtra to give her blessings. The Prime Minister lauded the farmers of Junagadh for promoting natural farming with full dedication. The Prime Minister highlighted that the taste of Kesar Mangoes grown in Gujarat is reaching every part of the world.

Speaking about the vast coastal regions of India, the Prime Minister pointed out that a large chunk of India’s coastline belongs to Gujarat. Recalling the past governments that treated the seas like a burden and its fresh air poison, Shri Modi interjected that times have now changed. “The  same seas that were considered as adversity are now reaping the benefits of our efforts.”  The Rann of Kutch which was marred by troubles is now leading the way forward for the development of Gujarat, the Prime Minister added. The Prime Minister remarked that the resolve he took for the development of Gujarat 25 years ago has now come to fruition.

The Prime Minister recalled that, as Chief Minister, he had launched the Sagar Khedu scheme for the welfare, security, amenities and infrastructure for the fishermen community. Due to these efforts, fish export from the state increased seven times. He remembered an instance with a Japanese delegation during his Chief Minister days when the delegation members asked to stop the presentation on the fisheries initiatives, as they could not control themselves after seeing the famous surmai fish on the screen and asked for a taste. Surmai fish is now well known in the Japanese market and substantial export takes place every year, he informed. “Double-engine government has brought double speed in the development works”, the Prime Minister said. Today itself, work started on three fishing harbours.

The Prime Minister informed that for the first time ever farmers, animal husbandry workers and Sagar Khedu fishermen were connected to the services of Kisan Credit cards scheme and it simplified the process of availing a loan from the bank. “As a result, 3.5 crore beneficiaries are availing of its services,” Shri Modi added.  The Prime Minister informed that it empowered the poor and needy of society to build a better future for themselves and their families. He further added that the interest would be waived off for those beneficiaries who repaid their loans on time. “The Kisan Credit Card has made life a lot easier, especially for our animal husbandry workers and the fishermen community”, the Prime Minister said.

“In the last two decades”, the Prime Minister continued, “the tremendous development of the seaports has opened the floodgates of prosperity for Gujarat. It has opened up new possibilities for Gujarat.” Throwing light on the Sagar Mala Scheme, the Prime Minister informed that the government has taken the initiative to embolden the infrastructure on the coasts of India by not just developing the seaports but by executing port-led development. “The coasts have Gujarat have witnessed many new projects based on this”, the Prime Minister continued, “Apart from Junagadh, the new Coastal Highway is going to pass through many districts of Porbandar, Jamnagar, Devbhoomi Dwarka, Morbi to Central and South Gujarat which will strengthen the connectivity of the entire coastline of Gujarat.”

The Prime Minister praised the tremendous work done by the mothers and sisters of the state and said that they become a protective shield. Highlighting the efforts of the Central Government towards women-led development in the last 8 years, the Prime Minister said that steps have been ensured at every level to make the lives of mothers and sisters easier. The Prime Minister pointed out the improving the health and respect of women and credited it to the construction of crores of toilets under Swachh Bharat Abhiyan.  The Prime Minister mentioned that Ujjwala Yojana is helping the women not just by saving them time but also improving their health as well as the health of the entire family. The Prime Minister brushed off the times of previous governments who would celebrate after delivering a few water handpumps in a village with pomp and show and interjected, “Today your  son is delivering piped water to every household.” Highlighting the Pradhan Mantri Matri Vandana Yojna, the Prime Minister informed that thousands of forms of help are being given to mothers during pregnancy through, so that they can eat nutritious food. “Most of the houses that our government is giving under the PM Awas Yojana are in the name of women”, he added “Today our government is giving wide expansion to women entrepreneurship in village-village through self-help groups. More than 8 crore sisters across the country are associated with self-help groups, of which lakhs are from Gujarat. Similarly, many sisters have become entrepreneurs for the first time under the Mudra Yojana.

The Prime Minister also highlighted the strides made by the state in the education field. He said, during the last 8 years hundreds of universities opened in the country. Gujarat is witnessing the opening of many quality institutions of higher education. New National Education Policy is bringing new opportunities in Gujarati language. Similarly, digital developments are creating new opportunities for the youth of Gujarat. “Digital India has given new opportunities to the youth of Gujarat to hone their various talents, This has created new employment opportunities. The youth have access to the big market. And this is happening because of cheap Made in India mobile phones and cheap data facilities”, he said.

The Prime Minister pointed out that growing infrastructure is promoting tourism in a big way. He said one of the biggest ropeways is functional now in the area. The Prime Minister said after many years, in April this year, flights have started again from Keshod Airport. When Keshod Airport is further developed, when it becomes a cargo facility, it will be easier to ship out our fruits, vegetables, fish and other products from here. With the expansion of Keshod Airport, the country and the world will get more access to all such places here, the tourism here will increase further, he added.

The Country rejoices as one in the national achievements in space, science or sports fields, however, the Prime Minister lamented the growing tendency to politicize the achievements of Gujarat and its people by certain sections. “Some political parties have made abusing Gujarat their political ideology”, the Prime Minister said. We will never tolerate the insult of Gujaratis or for that matter people of any state of the country, he emphasized. We should not allow the dilution of the spirit of ‘Ek Bharat Shreshtha Bharat’ and the dreams of Sardar Patel. He stressed the need to convert cynicism into hope and counter falsehood through development. He said Gujarat’s unity is its strength.

Chief Minister of Gujarat, Shri Bhupendra Patel, Members of Parliament, Shri Rajeshbhai Chudasama and Shri Ramesh Dhaduk, and Ministers from Gujarat Government, Shri Rushikesh Patel and Shri Devabhai Malam were those present on the occasion among others.

The Prime Minister laid the foundation stone for the improvement of coastal highways along with the construction of missing links. In the first phase of this project, a total highway length of over 270 Km will be covered across 13 districts.