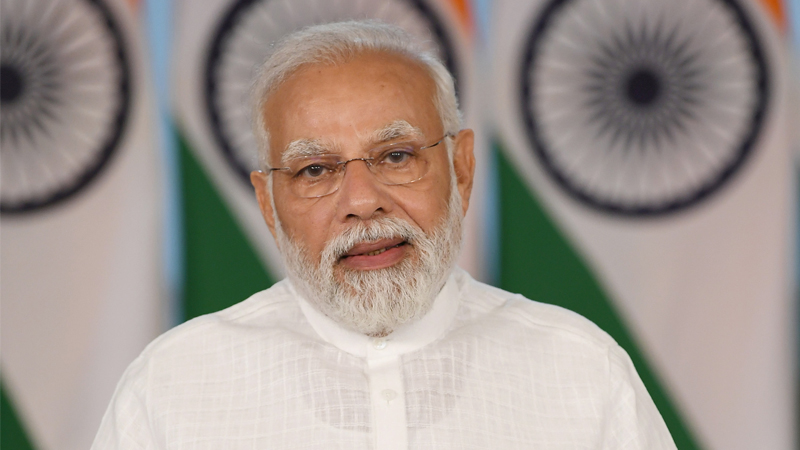 The Prime Minister, Shri Narendra Modi inaugurated and laid the foundation stone of various projects of Shrimad Rajchandra Mission, Dharampur in Valsad district, Gujarat via video conferencing. Chief Minister of Gujarat Shri Bhupendrabhai Patel was among those present on the occasion.

Addressing the gathering, the Prime Minister said hospital projects will prove to be of great service to women and other needy sections of society. He praised the spirit of silent service of the Shrimad Rajchandra Mission.

Recalling his long associations with the Mission, the Prime Minister praised their record of service and said that this spirit of duty is the need of the hour in today’s time of Azadi Ka Amrit Mahotsav. The PM expressed happiness over the commendable work done by the Shrimad Rajchandra Mission under the leadership of Pujya Gurudev in the field of rural health in Gujarat.  He said that the Mission’s commitment to the service of the poor gets strengthened by the new hospital. This hospital and the research centre will make affordable quality healthcare accessible to everyone.  “This is going to give strength to the vision of a healthy India in the ‘Amrit Kaal’. This also strengthens the spirit of Sabka Prayas (everyone’s efforts) in the field of healthcare”, he said.

The Prime Minister reiterated, that “in the Azadi Ka Amrit Mahotsav, the country is remembering its children, who made efforts to bring India out of slavery. Shrimad Rajchandra ji was such a saint whose great contribution is part of the history of this country.” He also narrated the admiration of Mahatma Gandhi for Shrimad Rajchandra ji. He expressed gratitude to Shri Rakesh Ji for continuing the work of the Shrimad.

The Prime Minister said that such people who have devoted their lives to the empowerment of women, tribal people and deprived segments are keeping the consciousness of the country alive. Referring to the big step in the form of the establishment of the Center of Excellence for Women, the Prime Minister said that  Shrimad, Rajchandra ji was very much insistent on the empowerment of daughters through education and skills. Shrimad spoke earnestly about women empowerment at a very young age. It is the responsibility of all of us to bring the women’s power in the country to the fore in the form of national power in the Azadi Ka Amrit Mahotsav, he said.

The Prime Minister remarked that the central government is trying to remove every obstacle that is being faced by the sisters and daughters, which prevents them from progressing. The Prime Minister also stated that the health policy that India is following today concerns the health of every living being around us. India is running a nationwide vaccination campaign not just for humans but also for animals.

The project cost of Shrimad Rajchandra Hospital at Dharampur in Valsad is around Rs. 200 crores. It is a 250-bed multispecialty hospital with cutting-edge medical infrastructure that will provide world-class tertiary medical facilities, especially to the people of the Southern Gujarat region.

Shrimad Rajchandra Animal Hospital is going to be a 150-bed hospital and will be built at a cost of around Rs. 70 crores. It will be equipped with top-class facilities and a dedicated team of veterinarians and ancillary staff. The Hospital will provide holistic medical care alongside conventional medicine for the care and upkeep of animals.

Shrimad Rajchandra Center of Excellence for Women will be built at an estimated cost of  Rs. 40 crores. It will have facilities for recreation, classrooms for self-development sessions, and rest areas. It will employ over 700 tribal women and subsequently provide a livelihood to thousands of others.