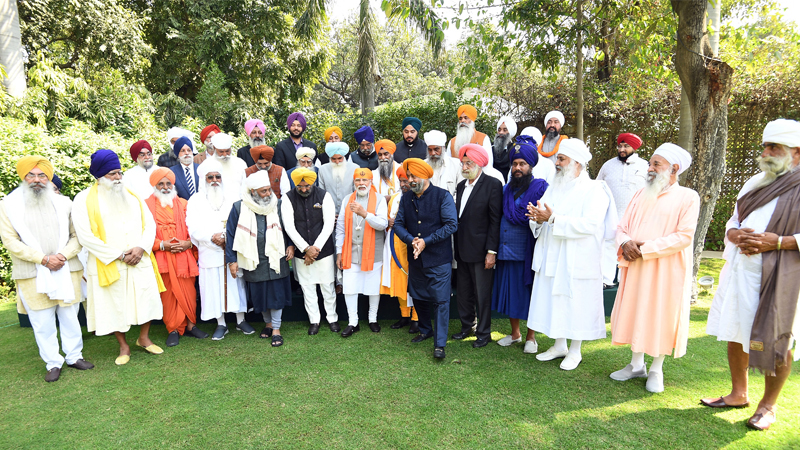 Prime Minister said that people in many regions of the country do-not know about the contribution and sacrifice of Chaar Sahibzaade. He recalled that whenever he used to get an opportunity to speak in schools and in front of kids, he always used to speak about Chaar Sahibzaade. The decision to observe 26 December as Veer Baal Diwas will go a long way in making kids from all corners of the country aware about them.

Prime Minister thanked the leaders of the Sikh Community for visiting him and said that the doors of his house are always open for them. He recalled his connection with them and time spent together during the course of his stay in Punjab.

Prime Minister praised the spirit of service of the Sikh Community and said that the world needs to be made more aware about it. Prime Minister said that his government is fully committed to the welfare of the Sikh Community. He talked about several steps taken by the government in this regard. He discussed the special arrangements that were made to bring back Guru Granth Sahib from Afghanistan with full honour. He also talked about the steps taken by the government through diplomatic channels to open up the Kartarpur Sahib Corridor for the Sikh pilgrims.

Shri Manjinder Singh Sirsa said that the decision to celebrate Veer Baal Diwas will make kids across the country aware of the sacrifices of Chaar Sahibzaade. Singh Sahib Giani Ranjeet Singh, Jathedar Takht Sri Patna Sahib, thanked the Prime Minister for taking steps like reopening Kartarpur Sahib Corridor and removing GST on Langar. He added that the multiple steps taken by the Prime Minister for the Sikh community show that he is a Sikh at heart. Shri Tarlochan Singh, Former Chairman, National Minority Commission, said that this is the first time since independence that the contribution of the Sikh community, who had sacrificed their lives in huge numbers during partition, is being recognized. He thanked the Prime Minister for taking the contribution of Sikh community to the world stage.