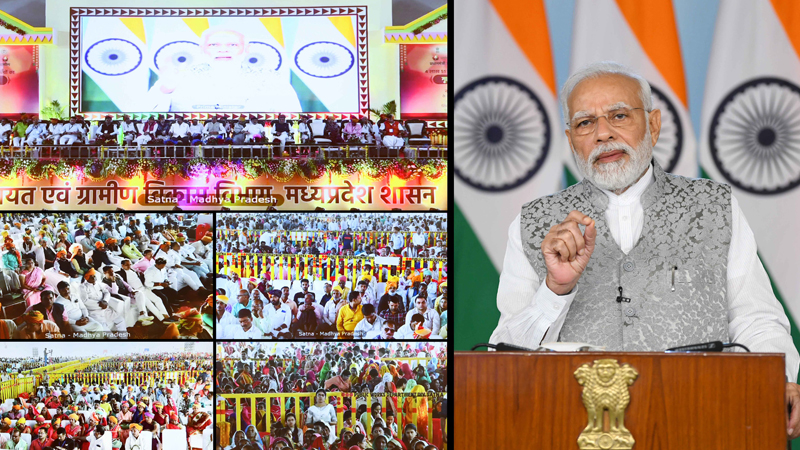 On the occasion of Dhanteras, the Prime Minister, Shri Narendra Modi participated in ‘Griha Pravesham’ of about 4.51 Lakh beneficiaries of Pradhan Mantri Awaas Yojana – Gramin in Satna, Madhya Pradesh via video conferencing today.

Addressing the gathering, the Prime Minister wished everyone on the auspicious occasion of  Dhanteras and Diwali. “Today is a new beginning for 4.50 lakh brothers and sisters of Madhya Pradesh who are performing Grih Pravesh in their new pucca homes”, he said. Recalling the time when Dhanteras was celebrated only by the wealthy people of the society by purchasing expensive assets like cars or homes, the Prime Minister said that Dhanteras used to be a festival only for the rich. The Prime Minister remarked that it is the new India of today where the poor are performing Grih Pravesh in their new homes on Dhanteras. Shri Modi congratulated especially those women who have become homeowners today.

The Prime Minister said that he can see the possibilities in the people who are getting houses today as, without a home, all possibilities are dimmed. Today is not a day of just Grihpravesh in the new house, it marks new happiness, new resolutions, new dreams, new energy and a new destiny. “It is a great fortune of our government that we could fulfil the biggest dreams of 3.5 crore families”, he said.

Highlighting the facilities that are paired up with the new houses, the Prime Minister said As the government is of the poor and dedicated to their welfare and understands the needs and wishes of the poor, the homes built by the government are equipped with toilets, electricity, water connection, gas connection. Different policies and schemes of the government complete the millions of homes that are constructed as part of the Pradhan Mantri Awas Yojna.

The Prime Minister said that due to bad policies of the past, the people were compelled to pass on their homelessness to the next generation as well. “I am honoured to have got the opportunity to take crores of my fellow countrymen out of this vicious cycle”, the Prime Minister said. In Madhya Pradesh itself, about 30 lakh houses have been constructed. Work is going on 9-10 lakh houses. These lakhs of constructions are creating new opportunities for employment, he said. Apart from various construction materials, skilled labour jobs of masons were created along with many other economic opportunities for various segments. He informed that 22,000 crore rupees were spent on the construction of these houses only in Madhya Pradesh, This massive infusion of capital, helped all aspects of the economic life in the state. “These houses are bringing progress for all”, he added.

Commenting on the changed working culture, the Prime Minister said that, unlike earlier times, when citizens were made to run to the government and request facilities, the current government is going to the citizens and running campaigns to bring all the benefits of the schemes to the people. “Today we are talking about the saturation of schemes’coverage without any discrimination.”, he added.

Talking about the urgency that the government is showing about these basic needs of the people, the Prime Minister said, this is because of the lessons of the past. In the past, so many people were deprived of these basic amenities that they had no time to think about anything else. “That is why all slogans of “Gareebi Hatao” remained ineffective. “That’s why we decided to rapidly connect every citizen of the country with these basic facilities. Now the poor, being equipped with basic amenities, are making efforts to reduce their poverty”, he elaborated.

He said that the government is providing free ration to 80 crore countrymen during the pandemic and has spent more than 3 lakh crore on this. The Prime Minister said “When the taxpayer feels that his money is being spent in the right place, he or she also feels happy. Today, crores of taxpayers in the country are satisfied with the great service they are doing by helping to feed crores of people during the Corona period. When this same taxpayer sees that free ‘Rewari’ is being distributed with the money collected from him, then he also gets pained. Today many such taxpayers are writing letters to me openly. I am happy that a large section of the country is gearing up to rid the country of Rewari culture.”

The Prime Minister remarked that the objective of the government is not limited to fulfilling the dreams and aspirations of its citizens but also trying to minimise the expenditure of middle and low-income groups. The Prime Minister gave the example of Ayushman Bharat and informed that four crore patients from poor economical backgrounds have been treated as part of this scheme so far. He stated that the government had spent thousands of crores for the free vaccine campaign during Corona and prevented the poor from shelling money out of their own pockets.

Commenting on the rising fertiliser prices due to the Ukraine War, the Prime Minister underlined that the government is going to spend an extra sum of Rs 2 lakh crore this year so that farmers do not bear the burden. “The PM Kisan Samman Nidhi of the Central Government is also proving to be a boon for the farmers”, the Prime Minister said. He also noted that the instalment of 16 thousand crores which was initiated a few days ago immediately reached every beneficiary farmer. “Right now”, the Prime Minister said, “our government has deposited more than 2 lakh crore rupees in the bank accounts of farmers. And this help has arrived when it is the sowing season and the farmers need money for fertilisers and medicines. He further informed that the money upon the sale of crops directly reaches the bank account. The Prime Minister added “MNREGA money is also directly deposited in the bank account. Thousands of rupees of Matru Vandana Yojana reach pregnant mothers when they are most in need of nutritious food.” All this is possible due to a sense of service and political will.

The Prime Minister also touched upon the large-scale use of technology for making the lives of common citizens easy. He mentioned drone surveys in creating property records in the Swamitva scheme and also in agriculture. He recalled the recent steps of converting lakhs of fertiliser shops into Kisan Samriddhi Kendras and introducing a common country-wide brand of urea – Bharat brand and hoped that these steps will help the farmers.

It has been a constant endeavour of the Prime Minister to provide a house with all basic amenities to every citizen of the country. Today’s event marks another step in this direction. Under the Pradhan Mantri Awas Yojana, about 38 Lakh houses have been sanctioned so far in Madhya Pradesh and construction of about 29 Lakh houses has been completed at a cost of more than Rs. 35,000 crores.