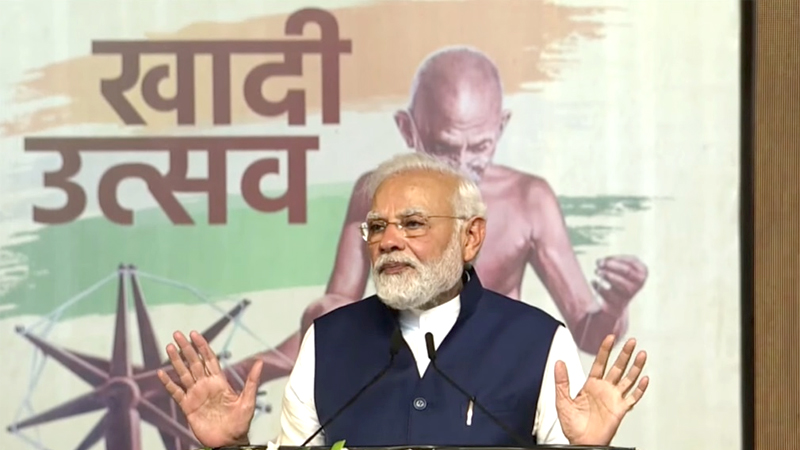 Addressing the gathering, the Prime Minister recalled his personal connection with Charkha and remembered his childhood when his mother used to work on Charkha. He said, “The bank of Sabarmati has become blessed today as on the occasion of 75 years of independence, 7,500 sisters and daughters have created history by spinning yarn on a spinning wheel together.” He added that spinning on charkha is nothing short of worship.

He noted the technology and design excellence of the ‘Atal Bridge’ that he inaugurated today. He said that the bridge is a tribute to Shri Atal Bihari Vajpayee who was always loved and revered by the people of Gujarat. “Atal Bridge is not only connecting the two banks of the Sabarmati river, but it is also unprecedented in design and innovation. The famous kite festival of Gujarat has also been taken care of in its design”, he said. Shri Modi also noted the enthusiasm with which the Har Ghar Tiranga campaign was observed in India. He said celebrations here reflected not only the patriotic feeling but also reflected the resolve for a modern and developed India. “Your hands, while spinning yarn on the Charkha are weaving the fabric of India”, he added.

The Prime Minister said, “History bears witness that a thread of Khadi became the force of freedom movement, it broke the chains of slavery.” He further added that the same thread of Khadi can become a source of inspiration to fulfil the promise of a developed India and thereby fulfilling the dream of a self-reliant India. “A traditional strength like Khadi can take us to new heights”, he said. This Khadi Utsav is an effort to revive the spirit and history of the freedom movement and an inspiration to achieve the resolutions of New India, he added.

He recalled his Panch-Prans that he proclaimed on 15th August, from the Red Fort. “At this holy place, on the banks of Sabarmati, I want to repeat the Pancha-Pranas. First – the great goal in front of the country, the goal of making a developed India. Second – the complete abandonment of the slavery mentality. Third – taking pride in our heritage, Fourth- making strong efforts to increase the unity of the nation, and Fifth- civic duty. He said that today’s Khadi Utsav is a beautiful reflection of the ‘Panch Prans’.

The Prime Minister dwelled on the neglect of Khadi in the period after independence. “At the time of the freedom movement, Khadi, which Gandhiji made the symbol of the country’s self-respect, was infused with an inferiority complex after independence. Because of this, Khadi and the village industry associated with Khadi were completely destroyed. This condition of Khadi was very painful, especially for Gujarat”, he said. He expressed pride that the task of reviving Khadi took place on the land of Gujarat. The Prime Minister emphasised the pledge by the Government of ‘Khadi for Transformation’ to ‘Khadi for Nation, Khadi for Fashion’. He said, “We started spreading the Gujarat success experiences across the country.” The problems which were related to Khadi across the country were resolved. We encouraged countrymen to buy Khadi products. The Prime Minister also acknowledged the contribution of women in the process of revival of Khadi. “Women power is also a major contributor to the growing strength of India’s Khadi industry. The spirit of entrepreneurship is ingrained in our sisters and daughters. The proof of this is also the expansion of Sakhi Mandals in Gujarat”, he added. He informed that in the last 8 years, sales of Khadi increased four times and for the first time, the Khadi and Gramodyog turnover crossed one lakh crore. The sector created 1.75 crore new jobs also.  He said that the financial inclusion schemes like Mudra Yojana are boosting entrepreneurship.

Highlighting the benefits of Khadi, the Prime Minister said that it is an example of sustainable clothing, eco-friendly clothing and it has the least carbon footprint. There are many countries where the temperature is high, Khadi is also very important from the point of view of health. Hence, Khadi can play a huge role at the global level. He said this in sync with the growing trend of back to basic and sustainable living at the global level.

The Prime Minister appealed to the people of the country to gift only the products made in Khadi Village Industries in the upcoming festive period. “You can have clothes made of different types of fabrics. But if you give place to Khadi in that, then the Vocal for Local campaign will gain momentum”, the Prime Minister said.

Recalling that in the past decades, India’s own prosperous toy industry was getting destroyed in the race for foreign toys, the Prime Minister highlighted that with the efforts of the government and the hard work of our brothers and sisters associated with the toy industries, the situation has now started changing. As a result, there is a huge decline in the import of toys.

The Prime Minister also asked people to watch the ‘Swaraj’ serial on Doordarshan. The serial depicts the story of the great freedom fighters and their struggle in great detail. Families should watch the series in order to understand and know about the sacrifice of our forefathers for our independence.

In a one of its kind event being held as part of Azadi ka Amrit Mahotsav, Khadi Utsav is being organized to pay tribute to khadi and its importance during the freedom struggle. The Utsav will be organised at Sabarmati Riverfront, Ahmedabad and will witness 7500 women khadi artisans from various districts of Gujarat spinning charkha live at the same time and at the same place. The event will also feature an exhibition showcasing the “Evolution of Charkhas” by displaying 22 Charkhas from different generations used since the 1920s. It will include charkhas like “Yerwada Charkha” which symbolises the charkhas used during the freedom struggle, to the charkhas with the latest innovations and technology used today. A live demonstration of the production of Ponduru Khadi was also done. During the event, the Prime Minister also inaugurated the new office building of the Gujarat Rajya Khadi Gramodyog Board and ‘Atal Bridge’, a foot-over bridge at Sabarmati.