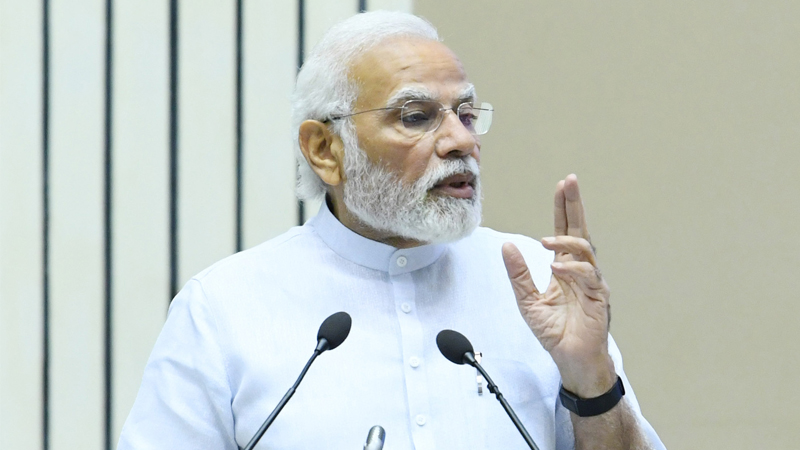 The Prime Minister, Shri Narendra Modi participated in the ‘Udyami Bharat’ programme today and launched key initiatives like ‘Raising and Accelerating MSME Performance’ (RAMP) scheme, ‘Capacity Building of First-Time MSME Exporters’ (CBFTE) scheme and new features of the ‘Prime Minister’s Employment Generation Programme’ (PMEGP) to ramp up the MSME sector. He also digitally transferred assistance to beneficiaries of PMEGP for 2022-23; announced results of the MSME Idea Hackathon, 2022; distributed National MSME Awards, 2022; and issued Digital Equity Certificates to 75 MSMEs in the Self Reliant India (SRI) Fund. Union Ministers Shri Narayan Rane and Shri Bhanu Pratap Singh Varma, MSME stakeholders from all over the country, and diplomats from various countries were among those present on the occasion.

Addressing the gathering, the Prime Minister said that the efforts of MSME India will be a key driver of Aatmnirbhar Bharat. He said whatever heights the 21st century India will achieve, that will be dependent on the success of the MSME sector. He emphasised that it is important for India’s MSME sector to be strong for increasing India’s exports and for India’s products to reach new markets. “Our government is taking decisions and making new policies keeping in mind your ability and the immense potential of this sector”, he added. He said that the initiatives launched today and other measures undertaken by the government are linked with the quality and promotion of MSME.

The Prime Minister remarked that when we say MSME, it expands in technical language to Micro Small and Medium Enterprises. But these micro, small and medium enterprises are a huge pillar of India’s growth journey. The MSME sector accounts for almost one-third of India’s economy. Strengthening the MSME sector is strengthening the entire society, making everyone recipient of the benefits of development. That is why this sector is one of the highest priorities of the government, he said.

Noting that more than 11 crore people are connected with the sector, The Prime Minister remarked that MSME is critical for employment generation. During the pandemic, the government decided to save the small enterprises and give them new strength. Under the Emergency Credit Line Guarantee Scheme, the central government has ensured Rs 3.5 lakh crore for MSMEs, he said. As per a report, this resulted in saving about 1.5 crore jobs, the Prime Minister informed. He said that MSME is a major medium for achieving the pledges of ‘Amrit Kaal’ of India’s independence.

Shri Modi recalled a time when earlier governments did not recognize the importance of the sector and shackled the sector by adopting policies that kept the small enterprise small. To address this, the definition of MSME was changed. The Prime Minister said if any industry wants to grow and expand, then the government is not only supporting it but is also making necessary changes in the policies. The Prime Minister pointed out that in GeM, MSME has got a very strong platform to provide goods and services to the government. He asked every MSME to get registered on the GeM portal. Similarly, prohibiting global tenders for projects worth less than 200 crore will also help the MSME.

The Prime Minister said that Pradhanmantri Rozgar Srijan Karykram was revamped after 2014 as it was not able to achieve its goals in the period between 2008-2012. Since 2014, more than 40 lakh jobs have been created under this programme. During this period 14 thousand crore rupees worth of margin money subsidy was provided to these enterprises. Cost limit for products falling in this scheme has also been increased, he informed.

Talking about inclusive development, the Prime Minister said that trans-gender entrepreneurs are being provided with all help to realize their goals.

The Prime Minister noted that now for the first time, the turnover of Khadi and Village Industries has crossed Rs 1 lakh crore. “This has been possible because our small entrepreneurs in the villages and our sisters have worked very hard. Khadi sales have increased 4 times in the last 8 years”.

The Prime Minister concluded by saying “Today, through this program, I assure all my brothers and sisters associated with the MSME sector that the government is committed to making policies that meet your needs and walk pro-actively with you. Every accomplishment of an entrepreneurial India will lead us towards a self-reliant India. I believe in you and in your ability.

Background of the Programme:

‘Udyami Bharat’ is reflective of the continuous commitment of the government, right from day one, to work towards the empowerment of MSMEs. The government has launched several initiatives from time to time like MUDRA Yojana, Emergency Credit Line Guarantee Scheme, Scheme of Fund for Regeneration of Traditional Industries (SFURTI) etc. to provide necessary and timely support to the MSME sector, which has helped benefit crores of people across the country.

‘Raising and Accelerating MSME Performance’ (RAMP) scheme with an outlay of around Rs 6000 crore, aims to scale up the implementation capacity and coverage of MSMEs in the States, with impact enhancement of existing MSME schemes. It will complement the Aatmanirbhar Bharat Abhiyan by fostering innovation, encouraging ideation, incubating new business and entrepreneurship by developing quality standards, improving practices and processes, enhancing market access, deploying technological tools and Industry 4.0 to make MSMEs competitive and self-reliant.

‘Capacity Building of First-Time MSME Exporters’ (CBFTE) scheme aims to encourage MSMEs to offer products and services of international standards for the global market. This will enhance the participation of Indian MSMEs in the global value chain and help them realise their export potential.

New features of the ‘Prime Minister’s Employment Generation Programme’ (PMEGP) include an increase in the maximum project cost to Rs 50 lakhs (from Rs 25 lakhs) for the manufacturing sector and Rs 20 lakhs (from Rs 10 lakhs) in the service sector and inclusion of applicants from Aspirational districts & Transgenders in the Special Category applicants for availing higher subsidies. Also, handholding support is being provided to applicants/entrepreneurs through the engagement of banking, technical & marketing experts.

MSME Idea Hackathon, 2022 was aimed at promoting and supporting the untapped creativity of individuals, promoting the adoption of the latest technologies and innovation among MSMEs. The selected incubatee ideas will be provided funding support of up to Rs. 15 lakhs per approved idea.

National MSME Awards 2022 is a recognition of the contributions of MSMEs, States/UTs, Aspirational Districts and Banks for their outstanding performance in the growth and development of India’s dynamic MSME sector.