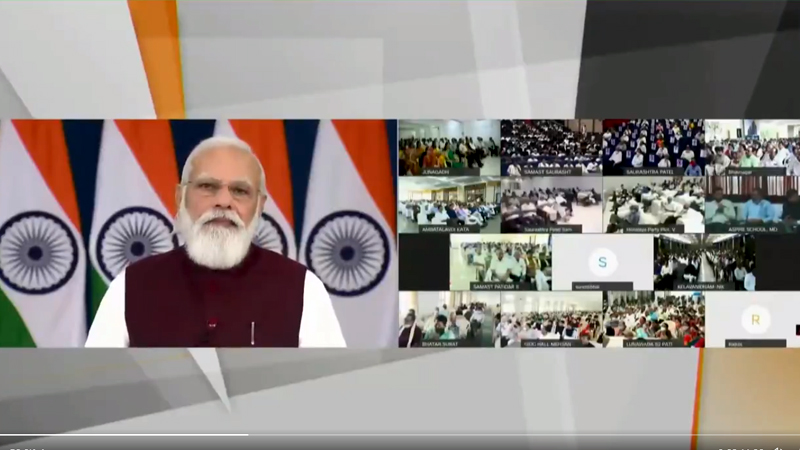 Prime Minister Shri Narendra Modi performed the Lokarpan of Sardardham Bhavan and Bhoomi Pujan of Sardardham Phase – II Kanya Chhatralaya via video conferencing. The CM and Deputy CM of Gujarat were also present on the occasion.

The Prime Minister expressed happiness that the commencement of Sardar Dham Bhawan is happening on the occasion of Ganeshotsav. He wished everyone for Ganesh Chaturthi, Ganeshotsav and Rishi Panchami and kshamavani Divas. He lauded all the members associated with Sardar Dham Trust for their dedication to the service of humanity. He admired their emphasis on the empowerment of the youth of the Patidar society as well as the poor and especially women.

Addressing the event, the Prime Minister said the Hostel facility being inaugurated today will also help so many girls to come forward. He said that the state of the art building, girls hostel and modern library will empower the youth. The Entrepreneurship Development Centre  will enrich the strong business identity of Gujarat and the Civil Service Centre will give new direction to the youth interested in careers in civil, defence and judicial services. He said that Sardar Dham will not only become an establishment for building the future of the country, but also inspire the future generations to live the ideals of Sardar Saheb.

He remarked today, September 11th, is a date in the history of the world that is known to have struck humanity. But this date also taught a lot to the whole world! A century ago it was on September 11, 1893, when the World Parliament of Religions was held in Chicago. He added that on this day, Swami Vivekananda stood on that global stage and introduced the world to the human values ​​of India. Today the world is realizing that tragedies like 9/11 will have a permanent solution, only through these humanitarian values.

The Prime Minister said that today September 11th is another big occasion – the 100th death anniversary of India’s great scholar, philosopher and freedom fighter ‘Subramania Bharati’. The philosophy of Ek Bharat Shreshtha Bharat envisioned by Sardar Saheb has been shining with full divinity in the Tamil writings of Mahakavi Bharati. He noted that Subramania Bharati drew inspiration from Swami Vivekananda and was influenced by Sri Aurobindo. Bharati gave a new direction to his thoughts and new energy while living in Kashi. The Prime Minister announced the establishment of a chair in the name of ‘Subramania Bharati ji in Banaras Hindu University. He said the ‘Subramania Bharati Chair’ on Tamil Studies would be established in the Faculty of Arts of BHU. Th e Prime Minister added that Subramania Bharti ji always laid special emphasis on the unity of mankind and the unity of India. His ideals are an integral part of India’s thought and philosophy.

The Prime Minister said Gujarat has been a land of collective efforts from the past till today. He said Gandhiji started the Dandi Yatra from here, which is still a symbol of the collective efforts of the country in the freedom struggle. Similarly, in the Kheda movement, under the leadership of Sardar Patel, the unity of farmers, youth and poor forced the British government to capitulate. He remarked that inspiration, that energy is still standing in front of us in the form of ‘Statue of Unity’, a skyscraper statue of Sardar Sahib on the soil of Gujarat.

The Prime Minister said continuous efforts are being made to bring forward those sections of the society who have been left behind. He said that today, on one hand, work is being done for the rights of Dalits and the socially backward, on the other hand 10% reservation has been given to those who are economically backward.These efforts are creating a new confidence in society, said the Prime Minister.

The Prime Minister remarked that National Education Policy will prepare students for the skills demanded from our youth in the market in future from the very beginning. He said the ‘Skill India Mission’ is also a big priority for the country. Under this mission lakhs of youth have got the opportunity to learn different skills and are becoming independent. Under the National Apprenticeship Promotion Scheme the students are getting the opportunity to increase their income along with honing their skills under skill development. He added that as a result of continuous efforts of many years that in Gujarat today where on one side school dropout rate has decreased to less than 1 percent, and at the same time, lakhs of youths have been provided a new future through different schemes. He said today the talent of Gujarat’s youth is getting a new ecosystem through a campaign like Startup India.

The Prime Minister praised the Patidar society, saying they give a new identity to the business wherever they go. ‘This skill of yours is now being recognized not only in Gujarat and the country, but all over the world’ he said. He added that there is another great feature of Patidar society, wherever they may be, the interest of India is paramount for them.

The Prime Minister said that the pandemic affected India but our recovery is faster than the damage. India was in reform mode when big economies were in defensive mode. When global supply chains were being disrupted, we were launching  PLI schemes to turn the tide in India’s favour, said the Prime Minister. He said that recently launched PLI in Textiles will greatly benefit cities like Surat.