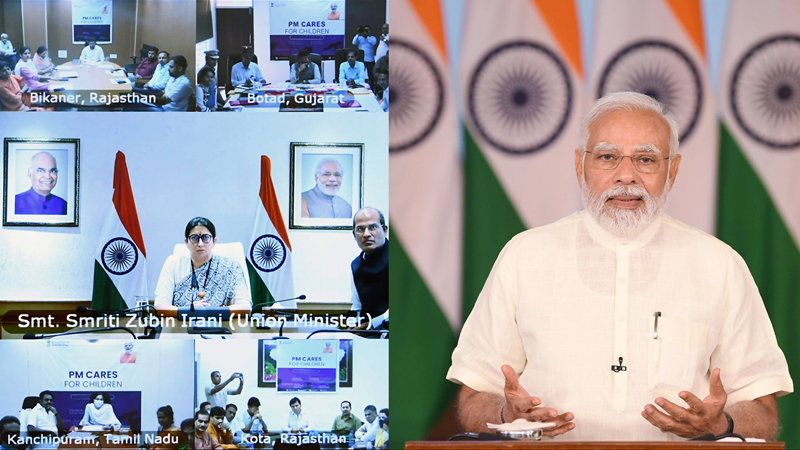 Prime Minister Shri Narendra Modi released benefits under PM CARES for Children Scheme today via video conference. Union Minister Smt Smriti Irani, many other members of the Council of Ministers, and Chief Ministers were among those connected to the event.

In such a scenario, the Prime Minister said “PM CARES for Children is a small effort to reduce the difficulties of such corona affected children who lost both their mother and father. PM CARES for children is also a reflection of the fact that every countryman is with you with the utmost sensitivity.”  The Prime Minister informed that if someone needs an education loan for professional courses or higher education, then PM-CARES will help in that too. For other daily needs, arrangements have also been made for 4 thousand rupees every month for them through other schemes. Apart from Rs 10 lakh on attaining the age of 23 years the children will be given health coverage through the Ayushman Card and emotional counselling through samvad helpline for psychological and emotional help.

The Prime Minister saluted the children for facing the most painful impact of the pandemic so bravely and said that nothing can compensate for the love of the parents. “Maa Bharati is with all you children in this hour of difficulty”.  The nation is trying to meet its responsibility through PM CARES for Children, he said. The Prime Minister recalled the instances of human kindness during the pandemic, especially how people contributed to the welfare of the affected people. The Prime Minister noted that this fund also helped a lot in preparing hospitals, buying ventilators and setting up oxygen plants during the Corona period. Because of this many lives could be saved, and the future of many families could be saved.

The Prime Minister remarked that even in the darkest atmosphere of despair, if we believe in ourselves, then a ray of light is definitely visible. He cited our country itself to be the biggest example of this. The Prime Minister advised the children not to allow despair to turn into defeat. He asked them to listen to their elders and their teacher. He also said that in these difficult times good books can be their reliable friends. He also asked them to stay disease-free and get involved and lead Khelo India and Fit India Movement. He also asked them to participate in the Yoga day also.  He said that in that atmosphere of negativity, India relied on its strength. “We trusted our scientists, our doctors, and our youth. And, we came out as a ray of hope, not a worry for the world. We did not become the problem but we came out as the solution giver. We sent medicines, and vaccines to countries around the world. Even in such a big country, we took the vaccine to every citizen”, he said. Our country is moving as the fastest growing economy and the world is looking towards us with new hope and faith, he added.

The Prime Minister expressed happiness that today when his government is completing its 8 years, the confidence of the country, the confidence of the countrymen in themselves is unprecedented. With corruption, scams worth thousands of crores, nepotism, terrorist organizations spreading across the country, and regional discrimination, the country is getting out of the vicious cycle in which it was trapped before 2014. “This is also an example for you children that event the most difficult days too pass”, he said

Referring to the welfare policies like Swachh Bharat Mission, Jan Dhan Yojna or Har Ghar Jal Abhiyan, the Prime Minister said that the government is moving with the spirit of Sabka Saath Sabka Vikas, Sabka Vishwas and Sabka Prayas. The last 8 years have been devoted to the welfare and service of the poor, he said. “As a member of the family, we have tried to reduce difficulties and improve the ease of living for the poor of the country”, the Prime Minister added.

The Prime Minister remarked that the heights that India has achieved in the last eight years, no one could have imagined earlier. Today, India’s pride has increased around the world, our India’s power has increased in the global forums. He expressed happiness that youth power is leading this journey of India. “Just dedicate your life to your dreams, they are bound to be realized”, the Prime Minister concluded.