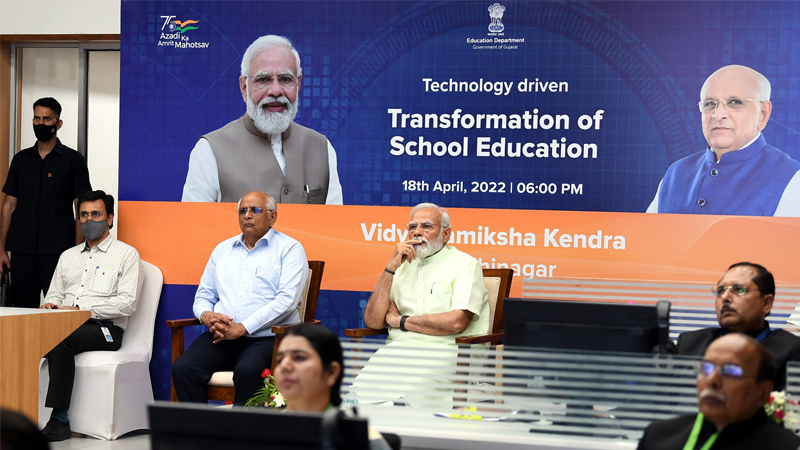 Shri Modi narrated a personal experience of his visit to Canada many years ago where he visited a science museum and filled a chart for his diet at the kiosk. His vegetarian diet made the machine say “are you a bird’!!

The Prime Minister continued and said that this must be kept in mind that while technology is accessible and can open new vistas hitherto unknown, however, the Prime Minister cautioned, that real world should not be ignored for the virtual world.

Darshana Ben from Tapi district elaborated on her experience and said how various parameters have improved due to the new system. She also said that work load has been reduced. She also informed most of students were registered on Diksha Portal. Tanvi, a class 10 student said that she wanted to become doctor. The Prime Minister told her that earlier science subjects were not available in the remote areas but after intense campaign situation changed and now benefits are visible.

The Prime Minister, said that Gujarat always go for new methods and later entire country adopts them. He was informed about the interest evinced by other states. The Prime Minister also expressed concern that too much disconnect should not happen. He wanted the coordinators of the project to keep the human element alive. He was told about the ‘read along’ feature and whatsapp based remedy measures.  The Prime Minister also asked to maintain an atmosphere of healthy competition based on the new system.

The Kendra  collects over 500 crore data sets annually and analyzes them meaningfully using big data analytics, artificial intelligence and machine learning, in order to enhance overall learning outcomes for students. The Kendra helps track daily online attendance of teachers and students, undertake centralized summative and periodic assessments of learning outcome of students etc. Vidya Samiksha Kendra has been deemed a global best practice by the World Bank, which has also invited other countries to visit and learn about it.