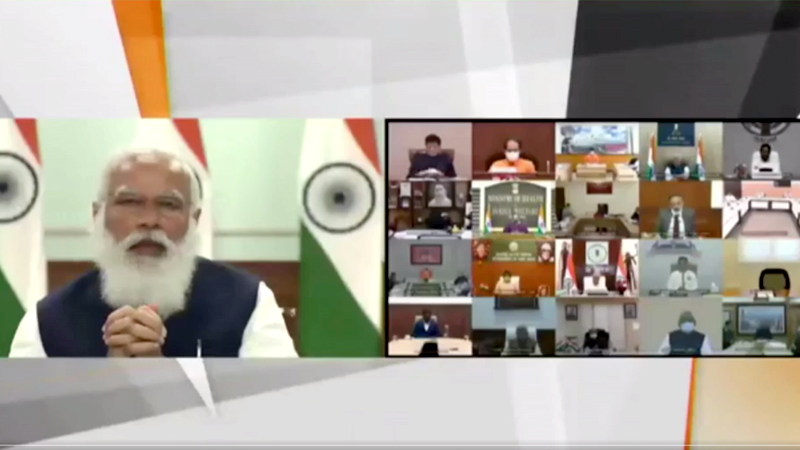 Addressing the event, the Prime Minister said the basis of the country’s progress is Cooperative Federalism and today’s meeting is to brainstorm to make it more meaningful and move towards Competitive Cooperative Federalism. He said the whole country succeeded when the state and the central government worked together during the Corona pandemic. He said agenda points for today’s meeting were selected keeping in mind the highest priorities of the country.

The Prime Minister said the campaign to provide a pucca roof to every poor is also going on now. Since 2014 construction of more than 2 crore 40 lakhs houses has been completed in both cities and villages put together. He said over 3.5 lakh rural houses are provided with piped drinking water within 18 months of the launch of Jal Jeevan mission. He added Bharat Net Scheme for Internet Connectivity in Villages is becoming a medium for a big change. When the central and state governments work together in all such schemes the speed of work will also increase and the benefits would also reach the last person.

The Prime Minister said that the positive response received on this year’s budget has expressed the mood of the nation. The country has made up its mind, wants to move fast and does not want to waste time. He added the private sector of the country is coming forward with more enthusiasm in this development journey of the country. As a government, we also have to honor this enthusiasm, the energy of the private sector and give it as much opportunity in the AatmaNirbhar Bharat campaign. He said AatmaNirbhar Bharat campaign is the way to develop an India that produces not only for its own needs but also for the world and this production also stands the test of the world.

The Prime Minister said keeping in mind the aspirations of a young country like India modern infrastructure has to be built. Innovation has to be encouraged and more technology should be used to provide better opportunities for education and skills. He stressed the need for strengthening our businesses, MSMEs and start-ups. He said shortlisting the products of hundreds of districts of the country according to its speciality has promoted them and also led to a healthy competition among the states. He urged to take this block wise, make full use of the resources of the states and increase the exports from the states. He stressed the importance for a better coordination and policy framework between the Center and the states.

The Prime Minister said the Central Government introduced PLI schemes for various sectors providing an excellent opportunity to increase manufacturing in the country. He urged the states to take full advantage of this scheme and attract maximum investment in themselves and also reap the benefits of reduced corporate tax rates.

On the funds allocated for infrastructure in this budget, the Prime Minister said this would help the country’s economy to advance the country’s economy on many levels. He stressed on the importance of making the states self-reliant and giving momentum to development in their budget. He announced that there would be a major increase in the economic resources of local bodies in the 15th Finance Commission. He said along with use of technology public participation is also very important in the Local Governance reforms.

The Prime Minister said about Rs 65000 crore are spent in the import of edible oils which should have gone to our farmers. Similarly there are many agricultural products, which are not only produced for the country but can also be supplied to the world. For this, it is necessary that all states make their agro-climatic regional planning strategy. He said an holistic approach has been adopted over the years, from agriculture to animal husbandry and fisheries. As a result, the country’s agricultural exports have increased significantly even during the Corona era.

The Prime Minister urged to focus on storage and processing of agricultural products to reduce its wastage. He stressed the need to export processed foods rather than raw foods to increase profits. He said reforms are very important for our farmers to get the necessary economic resources, better infrastructure and modern technology.

The Prime Minister said recently reform was done on OSP regulations which gives the youth the flexibility to work from anywhere and our tech sector has benefited immensely from this. Many of the restrictions have been eliminated. He said Geospatial data was liberalized recently. This would help our startups and the tech sector and also improve the ease of living for the common man.