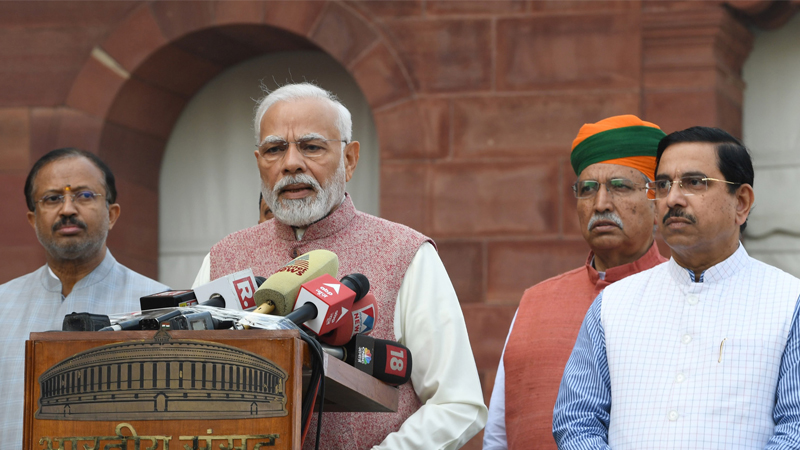 Today is the first day of the Winter Session (of Parliament). This session is important because we met before 15th August. On 15th August, 75 years of independence were completed and now we are moving forward in the journey of ‘Amrit Kaal’. We are meeting today at a time when India has got the opportunity to preside over the G-20. The manner in which India has made a space in the global community, the manner in which expectations with India have increased and the manner in which India is increasing its participation on global platforms, it is a huge opportunity to host the G20 Presidency at such a time.

This G-20 Summit is not just a diplomatic event, but this G-20 summit is an opportunity to display India’s capability before the world in a holistic manner. Such a large country, mother of democracy, so many diversities, so much potential, and therefore, this is a big opportunity for the world to know India and for India to show its potential to the whole world.

Recently, I had discussions with all the party leaders in a very congenial atmosphere. Its reflection will definitely be seen in the House as well. The same spirit will be visible from the House as well which will be useful for presenting India’s potential in the world. In this session, efforts will be made to take important decisions while keeping in mind taking the country to new heights of development and new opportunities to take the country forward amid the current global situation.  I am sure that all political parties will add more value to the discussion, give new strength to the decisions with their views and help in highlighting the direction more clearly. For the remaining period of this term of the Parliament, I would like to urge all the party leaders and floor leaders to give more opportunities to those who have come to the House for the first time, the new MPs, the young MPs, and increase their participation in discussions for their bright future and prepare the future generation of democracy.

In the past, whenever I have had informal meetings with MPs of almost all political parties, all the MPs say one thing that they suffer a lot due to uproar in the House and frequent adjournments of the House. Young MPs say that Parliament is a big university of democracy and they are devoid of learning and understanding due to non-functioning of the session and in the absence of discussions. They say that they are not getting opportunities and therefore the functioning of the House is very important. This voice emerges especially from the young parliamentarians of all the parties.

MPs from the opposition parties also say that they do not get the opportunity to speak in the debates. They say that they suffer a lot due to frequent disruptions and adjournments of the House. I urge all floor leaders and party leaders to understand the pain of these MPs.  It is very important for democracy that the country should get the benefit of their enthusiasm and zeal to add their potential to the development of the county and to the decision-making processes. I request all the parties and the parliamentarians to make a collective effort towards making this session more productive.

There is another good fortune that today for the first time our Vice-President will start his term as the Chairman of the Rajya Sabha and this will be his first session and the first day. The manner in which our President Droupadi Murmu ji has played an important role in making India proud with the great heritage of India and our tribal traditions, similarly, a farmer’s son will make India proud as the Vice-President and chairman of the Rajya Sabha and will inspire and encourage the MPs. On my behalf, I also wish him many best wishes.

Thanks a lot, friends.

The Prime Minister, Shri Narendra Modi addressed the Rajya Sabha at the start of the Winter Session of the Parliament and welcomed the Vice President to the Upper House today.

The Prime Minister began his address by congratulating Shri Jagdeep Dhankar, Vice President of India & Chairman of Rajya Sabha on behalf of all members of the parliament as well as all the citizens of the country. Throwing light on the prestigious position of the Vice President of the country, the Prime Minister remarked that the seat in itself is a source of inspiration for millions.

Addressing the Chairman of Rajya Sabha, the Prime Minister expressed delight that today coincides with Armed Forces Flag Day and saluted the armed forces on behalf of all members of the house. Referring to Jhunjhunu which is the birthplace of the Vice President, the Prime Minister acknowledged the contributions of numerous families of Jhunjhunu that have played an advanced role towards the service of the nation. He highlighted the close association of the Vice President with Jawans and Kisans and said, “Our Vice President is a Kisan Putra and he studied at a Sainik school. Thus, he is closely associated with Jawans and Kisans.”

The Prime Minister highlighted that the esteemed upper house of the Parliament is welcoming the Vice President at a time when India has witnessed two monumental events. Shri Modi pointed out that India has entered into the Azadi Ka Amrit Kaal and also got the prestigious opportunity to host and preside over the G-20 Summit. He further added that India will play a key role in determining the direction of the world in the days to come other than marking a new era of development for New India. “Our democracy, our Parliament and our parliamentary system will have a critical role in this journey”, he added.

Underlining that today marks the formal beginning of the Vice President’s term as the Chairman of Rajya Sabha, the Prime Minister remarked that the responsibility enshrined upon the shoulders of the Upper House is associated with the concerns of the common man. “India understands its responsibilities during this period, and adheres to it”, he added. The Prime Minister also pointed out that the prestigious tribal society of India in the form of the President, Smt Draupadi Murmu is guiding the nation at this important juncture.  He also threw light upon ex-President, Shri Ram Nath Kovind who reached the pinnacle position of the country after hailing from a marginalised community.

Looking up to the chair with reverence, the Prime Minister said, “Your life is proof that one cannot accomplish anything only by resourceful means but by practice and realisations.” Shining the spotlight on the Vice President’s experience as a senior lawyer for more than three decades, the Prime Minister on a lighter note said that he will not miss the court in the House because there are a large number of people in the Rajya Sabha who used to meet him in the Supreme Court. He continued, “You have also worked in the role from MLA to MP, Union Minister and Governor.” He further added that the common factor among all these roles is his devotion to the development of the country and democratic values. The Prime Minister also recalled the 75% vote share that the Vice President had gathered in the Vice Presidential Elections which was proof of everyone’s affinity towards him. The Prime Minister remarked, “Taking the lead is the real definition of leadership and it becomes more important in the context of Rajya Sabha because the House has the responsibility of taking forward democratic decisions in a more refined manner.”

Referring to the responsibilities enshrined upon its members to uphold and enhance the dignity of this House, the Prime Minister said that the house has been a conductor of the country’s great democratic heritage and has also been its strength. He further highlighted that many former Prime Ministers served as Rajya Sabha members at some point in time. The Prime Minister assured the members that under the guidance of the Vice President, this House will take forward its legacy and dignity. “Serious democratic discussions in the House will give more strength to our pride as the mother of democracy”, he added.

In concluding the address, the Prime Minister recalled the last session where the phraseology and rhymes of the former Vice President and former Chairman were a source of happiness and laughter for the members. “I am sure that your quick-witted nature will never let that shortcoming slip away and you will continue to give that benefit to the House”, the Prime Minister concluded.