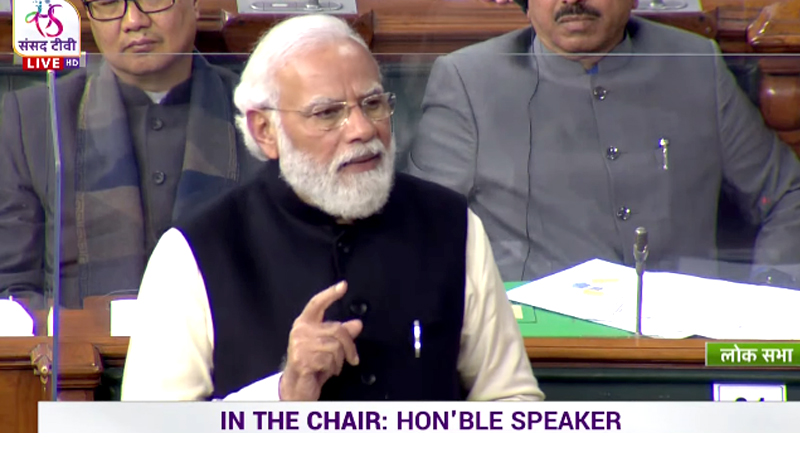 The Prime Minister, Shri Narendra Modi, today replied to the motion of thanks on the President’s address to Parliament, in the Lok Sabha. The Prime Minister paid tribute to Lata Mangeshkar before starting his speech. “Before making my speech, I would like to pay tributes to Lata Didi. Through her music she unified our nation”, he said.

The Prime Minister underlined the importance of the current epoch in making new resolutions and rededicating to the task of nation -building.  “’Azadi Ka Amrit Mahotsav’ is the perfect time to think about how India can play a global leadership role in the coming years. It is equally true that India has made several developmental strides in the last few years”, he said. Furthermore, he contined, that a new world order in the post-Corona period is taking shape rapidly. “This is a turning point where we as India should not lose this opportunity”, he added.

The Prime Minister narrated the changing status of the deprived and poor who are getting new dignity through facilities. “Earlier, gas connection was a status symbol. Now, the poorest of the poor have access to it and that is why it is very gladdening. The poor have access to bank accounts, DBT is helping in service delivery…these are major changes”, he said. He added that when poor person feels happy due to electricity in her house, her happiness gives strength to the joy of the nation. He also talked of the joys of smoke-free kitchen in poor household due to free gas connection.

The Prime Minister underlined the importance of proper functioning of democracy and highlighted the centuries old democratic tradition of India. “We are firm believers in democracy. And, we also believe that criticism is an essential part of democracy. But, blind opposition to everything is never the way ahead”, he emphasized. The Prime Minister lamented the fact of using the pandemic for political purpose. He criticized pushing people who were following lockdowns, when guidelines were suggesting that people stay where they were, being asked and scared to leave Mumbai and Delhi for their hometown in Uttar Pradesh and Bihar.

Shri Modi also regretted the blind opposition to efforts that should be universally supported. “If we are talking about being vocal for local, are we not fulfilling the dreams of Mahatma Gandhi? Then, why was it being mocked by the Opposition? We talked about Yoga and Fit India but that was mocked by the Opposition too”, he said. “The world has taken note of India’s economic strides and that too in the middle of a once in a lifetime global pandemic”, he added.

The Prime Minister recalled the flu pandemic hundred year ago and noted the that most of the deaths were due to hunger. He stressed that in the current pandemic, no Indian was allowed to die of hunger and one of the biggest social security measures was taken. “The Government of India ensured that over 80 crore fellow Indians get access to free ration in the midst of the pandemic. It is our commitment that no Indian has to remain hungry”, he said.

The Prime Minister dwelled at length on the new approach of governance and project delivery. He cited the long pending projects such as Saryu Nahar National Project in Uttar Pradesh which got completed by the current government. He also cited the example of PM Gati Shakti which presents a holistic approach to solve the infrastructure challenges and will reduce the logistics choice of the industry. The Prime Minister reiterated the emphasis is on proper connectivity. “Our Government changed the definition of MSMEs and this helped the sector”, he added.

The Prime Minister also talked of the new mentality of Aatmnirbharta which has been pushed by innovative policies. He highlighted the harnessing of the talent and youth of country via opening new sectors. “We do not believe only Governments can solve all problems. We believe in the people of the nation, the youth of the nation. Take the start-up sector for example. The number of start-ups have risen and this shows the strength of our people”, he also highlighted the rise of quality unicorn in recent times. The Prime Minister said “We do not agree with the approach of scaring our youth, wealth creators and entrepreneurs.” There were just 500 startups before 2014. In the last 7 years 60 thousand startups emerged and India is headed towards a century of unicorns. India has reached third place with regard to the startups.

He said that mocking ‘Make in India’ amounts to mocking the entrepreneurship of India, youth of India and industry of media. He also maintained that being self-reliant in the defence sector is among the biggest national service.

The Prime Minister said in the past inflation was explained away by giving the excuse of global problems, whereas India, today, is tackling inflation despite difficult global scenario without making excuses for that.

The Prime Minister said “Nation, for us is a living soul, not just an arrangement of power or government”. He cited puranas and Subramania Bharathi to elaborate on an all-encompassing concept of India where entire India is treated as living soul. He narrated the respect given to CDA Gen Bipin Rawat by the people of Tamil Nadu as an example of pan-India national sentiment.

The Prime Minister concluded by exhorting political parties, citizens and youth to contribute with positive sentiment during the auspicious period of Amrit Kaal.