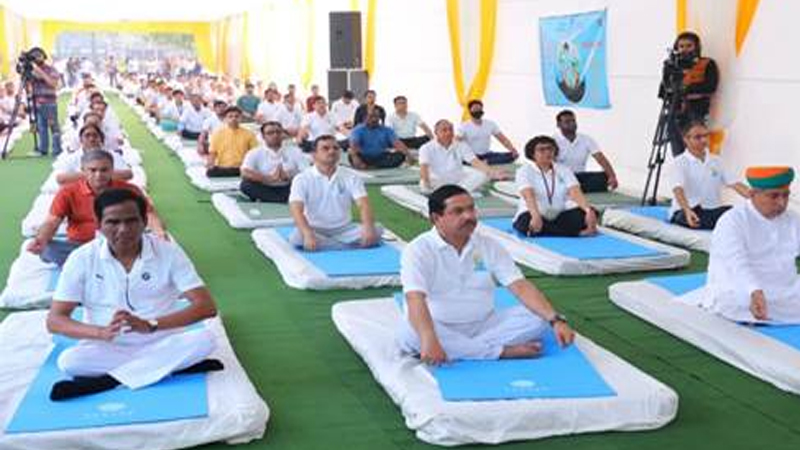 Union Minister of, Coal, Mines and  Parliamentary Affairs Shri. Pralhad Joshi, joined the Nation in celebrating the countdown programme to the eighth edition of International Day of Yoga at Shastri Bhawan,  here today.

Organized by the Ministry of Mines, to mark the countdown to the upcoming International Day of Yoga- 2022 as part of ‘Yoga Utsav’, the event witnessed active participation from officers and staff members of the Ministries of Coal, Mines and Parliamentary Affairs with around 250 people practicing Yoga protocols and following demonstration by experts from Ministry of Ayush’s Morarji Desai National Institute of Yoga.

Encouraging people to adopt Yoga practices in their  day to day life, Minister Shri. Pralhad Joshi, said “Yoga is essential for leading a balanced life, both for physical and  mental well-being. The popularity of Yoga has transcended boundaries and is practiced across the world today.’’

Shri. Joshi also thanked the Prime Minister for popularising Yoga across the globe. ‘’Besides being an avid practitioner of Yoga himself, it is the vision of  Prime Minister Shri. Narendra Modi which has captured the imagination and galvanised people to adopt Yoga as a way of life. The sheer scale at which Yoga is practiced now in India and across the globe is unprecedented’’ , the Minister said.

International Yoga Day (IDY) is celebrated on June 21 every year following its inception in the United Nations General Assembly in 2014 after Prime Minister Shri. Narendra Modi proposed the idea, which was endorsed by 175 countries.

The International Day of Yoga is being held in physical mode after a gap of two years due to the Covid-19 pandemic, with Prime Minister Shri. Narendra Modi set to lead the mass Yoga demonstration event in Karnataka’s Mysuru on June 21 next month.