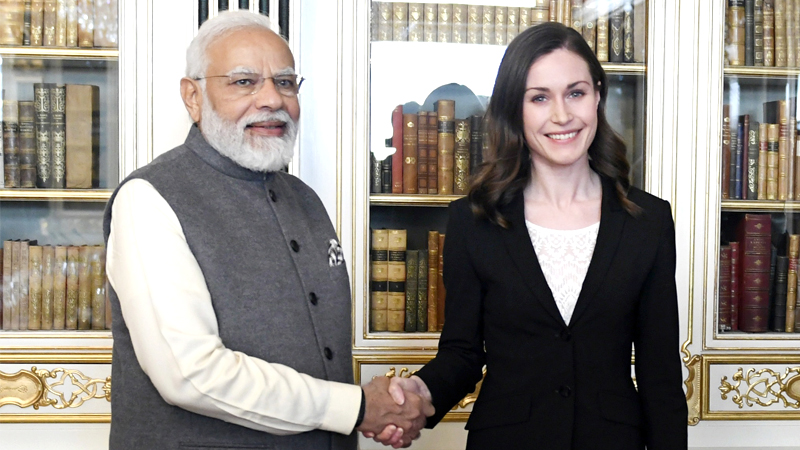 Prime Minister Shri Narendra Modi met H.E. Ms. Sanna Marin, Prime Minister of Finland, in Copenhagen on the sidelines of the 2nd India-Nordic Summit. This was the first in-person meeting between the two leaders.

Both sides expressed satisfaction at the progress made in the implementation of the outcomes of the bilateral Virtual Summit held on March 16, 2021.

Both leaders noted that areas like sustainability, digitalization and cooperation in science and education were important pillars of the bilateral partnership. They discussed opportunities to expand cooperation in the fields of new and emerging technologies like AI, quantum computing, future mobile technologies, clean technologies and smart grids.

Prime Minister invited Finnish companies to partner with Indian companies and take advantage of the enormous opportunities that the Indian market presents, particularly in telecom infrastructure and digital transformations.

Discussions also took place on regional and global developments, and on greater cooperation in international organizations. 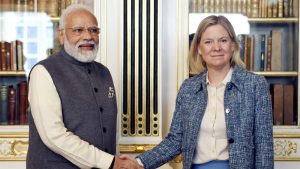 Prime Minister Shri Narendra Modi met H.E. Ms. Magdalena Andersson, Prime Minister of Sweden, on the sidelines of the 2nd India-Nordic Summit in Copenhagen. This was the first meeting between the two leaders.

India and Sweden have had longstanding close relations based on common values; strong business, investment and R&D linkages; and similar approaches to global peace, security and development. Innovation, Technology, Investment and R&D collaborations provide the bedrock of this modern relationship. During the 2018 visit of Prime Minister Modi to Sweden on the occasion of the 1st India-Nordic Summit, the two sides had adopted a wide-ranging Joint Action Plan and signed a Joint Innovation Partnership.

In today’s meeting, the two leaders reviewed the progress made in our bilateral partnership. They also expressed satisfaction at the progress made by the Lead IT initiative. This was a India-Sweden joint global initiative to set up a Leadership Group on Industry Transition (LeadIT) in September 2019 at the UN Climate Action Summit to help guide the world’s heaviest greenhouse gas (GHG) emitting industries towards the low-carbon economy. Its membership has now grown to 35 with 16 countries and 19 companies. 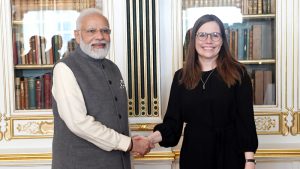 Prime Minister Shri Narendra Modi had a bilateral meeting with H.E. Ms. Katrin Jakobsdottir, Prime Minister of Iceland, in Copenhagen on the sidelines of the 2nd India-Nordic Summit.

Both Prime Ministers warmly recalled their first meeting during the 1st India-Nordic Summit in Stockholm in April 2018. They noted that this year both countries are celebrating the 50th anniversary of establishment of diplomatic relations.

Both leaders discussed ways to further strengthen economic cooperation especially in the sectors of geothermal energy, Blue Economy, Arctic, renewable energy, fisheries, food processing, education including digital universities, and culture. Geothermal energy, in particular, is an area where Iceland has special expertise, and both sides stessed on collaboration between universities of both countries in this sector.

Prime Minister lauded Prime Minister Jakobsdottir’s personal efforts at promoting gender equality and briefed her on India’s advances in this regard.

Meeting with Prime Minister of Norway 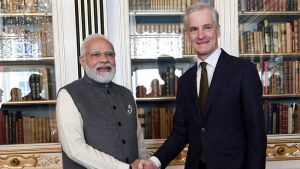 Prime Minister Shri Narendra Modi met H.E. Mr. Jonas Gahr Store, Prime Minister of Norway, in Copenhagen on the sidelines of the 2nd India Nordic Summit. This was the first meeting between the two leaders since the assumption of office by Prime Minister Store in October 2021.

Discussions also took place on regional and global developments. As members of UNSC, India and Norway have been engaging with each other in the UN on global issues of mutual interest.