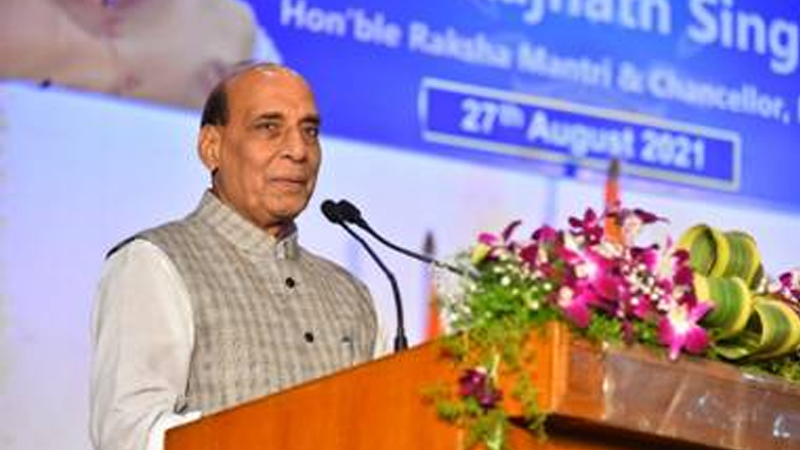 Raksha Mantri Shri Rajnath Singh visited Defence Institute of Advanced Technology (DIAT), a deemed to be University, for its 6thGeneral Body Meeting on 27th August 2021.He is Chairman & Chancellor of the Institute.Speaking on the occasion, he said, it is a matter of great pride that DIAT has been contributing towards nation building by conducting advanced courses in science and technology related to defence and national security.

Shri Rajnath Singh said, “The vision of our honourable PM is to make our nation self-reliant –‘Atmanirbhar Bharat’.  Towards this, we have initiated several steps for indigenisation of defence technologies and manufacturing in the country. These initiatives require large pool of technologists armed with skills of future warfare.”

Raksha Mantri expressed happiness that DIAT has taken proactive role in this direction by opening new schools in the areas of Quantum Technology, Robotics and Automation and Defence Technology. Such augmentation with eminent professors of Indian origin and collaboration with recognised foreign institutes will transform the institute into a frontier technology centre.He also mentioned that DIAT has started interdisciplinary research and teaching programme in the area of Quantum Technologies and Robotics. He also witnessed some demonstrations in these technologies.

Raksha Mantri expressed satisfaction that DIAT has been conducting online certificate courses for the benefit of the young engineering professionals in Artificial Intelligence and Cyber Security which are the preliminaries for future information security and war-gaming. “It is heartening to note that 1,500 young professionals have already been trained by DIAT,” he added. These steps lead to self-reliance in critical defence technologies. In recent years, intake of studentsin M Tech, MSc and PhD are continuously increasing with better quality of students. Books, patents and paper publications are increasing, exhibiting the academic growth of the institute. After the GBM, Raksha Mantri addressed DIAT faculty, students and staff. He said that DIAT is in process of collaborating with eminent professors of Indian origin from recognised foreign institutes which will take our institute closer towards making it into a frontier technology institute in these areas. Raksha Mantri congratulated DIAT for taking a lead for self-reliance in these critical technologies.

Speaking about uniqueness of the DIAT, which also conducts various short-term specialised courses like Missile technology, cyber security, cryptology for our defence services, Shri Rajnath Singh said, “DIAT has conducted several International workshops. Armed Forces and DRDO Scientists are continuously updated through such workshops and getting regular doctoral and post-graduate degrees from this University.”

Speaking about academic excellence of the DIAT, Raksha Mantri said, “DIAT faculty members are pioneers in their domain and I am also informed that 03 professors of DIAT are ranked in the top two per cent bracket in the world.  I congratulate them and wish many more to achieve this distinction. Raksha Mantri inaugurated newly constructed married accommodation for PhD scholars/international students/visiting faculty on the campus. After the inauguration of the hostel he witnessed demonstration of free space optical communication project of DIAT.

Shri Rajnath Singh praised DIAT and Defence Research and Development Organisation (DRDOP for coming forward during the time of crisis of country during the pandemic. In this time DIAT acquired nine patents in combating COVID-19 and productionized these technologies industry partners.