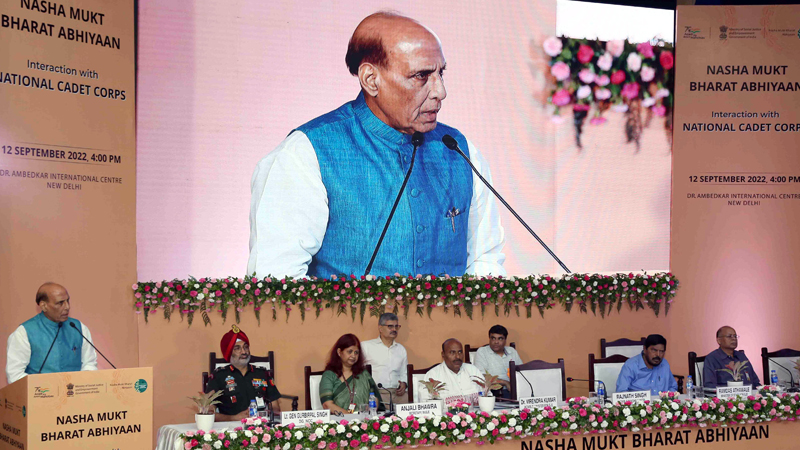 Raksha Mantri Shri Rajnath Singh has appealed to the Nation, especially the youth, to unite and fight against drug addiction, terming the menace as one of the stumbling blocks for India to achieve its full potential. He was interacting with National Cadet Corps (NCC) cadets and youth at a function ‘An Interaction with NCC cadets and Pledge Against Drug Abuse’, organised by Ministry of Social Justice & Empowerment in New Delhi on September 12, 2022. Cadets from all 17 State Directorates and youth from different parts of the country joined the event through video conferencing. The Raksha Mantri urged them to fight and eliminate drug addiction on the same scale as the country’s revolutionaries fought for the freedom struggle and ensured independence.

“India is moving forward in the direction of becoming one of the superpowers of the world. But, there are some limitations which are preventing us from achieving our true potential. Drug addiction is one such limitation. Despite having all qualities, our country has not yet been able to stand in the line of developed countries, as there are many people, especially the youth, who are in the grip of drugs. Youth are the future of the country. They are the cornerstones of the nation. If their present is intoxicated, their future can be easily guessed. We need to wedge a fight against drugs like we did for our Independence,” Shri Rajnath Singh said.

Elaborating more on the ill-effects of the drugs, the Raksha Mantri stated that it not only adversely affects the maintenance of law and order in society, but also gives rise to terrorist activities at national and international levels. He added that many international organisations accept that the money earned from illegal drug trade is used to aid terrorist organisations, which threaten the defence and security of many countries. There is an urgent need to work together and get rid of the menace from all sections of society, he said.

Shri Rajnath Singh urged the NCC cadets to form a group of 3-4 cadets and try to reach out to the youth addicted to drugs, informing them about the ill-effects of drug use. He exhorted them to first gain knowledge about the harmful effects of drug use as well as the how to easily approach de-addiction centres set up by the Government at various places. Through this, the cadets will be able to help those who wish to free themselves from the clutches of drugs. ‘Our NCC cadets are in a way another avatar of our armed forces. If our forces are protecting the country from external enemies, then our NCC cadets can protect the country from internal enemies like drugs’, he said.

The Raksha Mantri exuded confidence that the Nation will be free from the menace of drugs in ‘Amrit Kaal’ through the concerted efforts from all sections of society.

The interaction event was jointly presided over by Minister for Social Justice & Empowerment Dr Virendra Kumar. The Department of Social Justice & Empowerment is the Nodal Department in the Government of India for Drug Demand Reduction. To create awareness among youth, children and community, Nasha Mukt Bharat Abhiyaan (NMBA) was launched by the government on August 15, 2020 in 272 identified districts. So far, more than eight crore people, including three crore youths, two crore women and 1.59 lakh educational institutions have become a part of NMBA.

With active involvement of NCC Cadets, the Department of Social Justice & Empowerment is expected to take this Abhiyaan to newer heights and achieve its objective of Nasha Mukt Bharat.