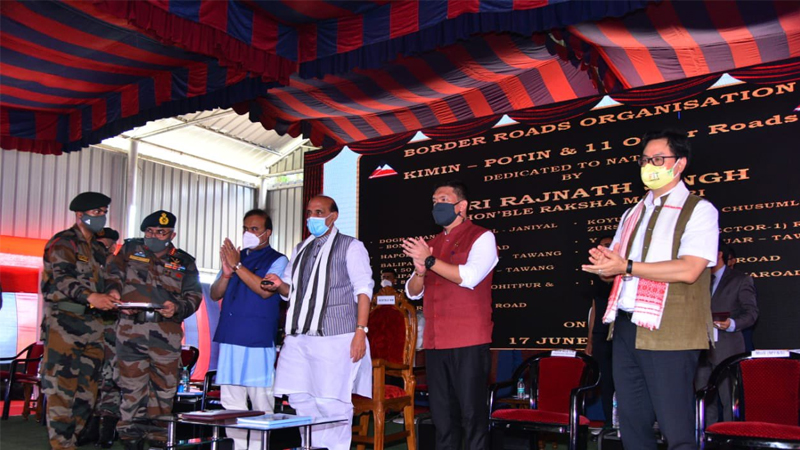 At an event organised in Lakhimpur district of Assam, the Raksha Mantri e-inaugurated a 20-km long double lane Kimin-Potin road, along with nine other roads in Arunachal Pradesh and one each in the Union Territories of Ladakh and Jammu & Kashmir. The roads have been constructed under ‘Arunank’, ‘Vartak’, ‘Brahmank’, ‘Udayak’, ‘Himank’ and ‘Sampark’ projects of BRO.

Speaking on the occasion, Shri Rajnath Singh lauded BRO for its contribution in infrastructure development of remote border areas of the country, especially amid the COVID-19 restrictions. He said the roads inaugurated today hold strategic and socio-economic importance as they will play an important role in strengthening national security as well as promoting development of the North-East region. “These roads will be helpful in fulfilling the needs of our Armed Forces and transporting necessities like medicines and ration to remote areas,” he said.

Shri Rajnath Singh paid tribute to the soldiers who showed exemplary courage during the Galwan Valley incident last year and made the supreme sacrifice in the service of the nation. He said India is a peace-loving nation but its response to aggression has been resolute.

The Raksha Mantri also touched upon some of the major reforms undertaken by the Government, including appointment of Chief of Defence Staff, measures to boost self-reliance in defence manufacturing and Corporatisation of Ordnance Factory Board (OFB). These reforms are proving to be a game changer in the military preparedness in the rapidly changing times, he said.

Shri Rajnath Singh underlined the constant efforts of the Government to make India self-reliant in defence manufacturing under the ‘AatmaNirbhar Bharat’ envisioned by the Prime Minister. “We are actively working towards making India a defence manufacturing hub. Self-reliance in defence production will reduce our dependence on imports, increase exports and strengthen our economy,” he said.

In his address, DG Border Roads Lt Gen Rajeev Chaudhry gave a brief overview of the achievements of BRO and reiterated the commitment of the organisation towards infrastructural development of border areas.