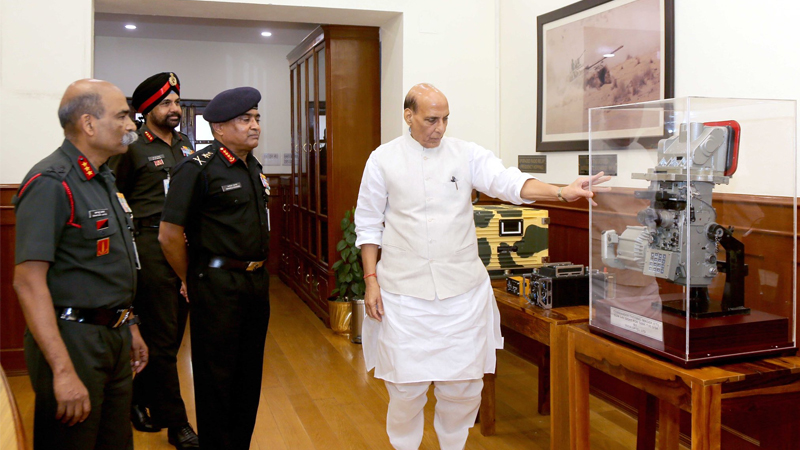 Raksha Mantri Shri Rajnath Singh handed over indigenously-developed equipment and systems to the Indian Army in New Delhi on August 16, 2022. These include Future Infantry Soldier as a System (F-INSAS), new generation anti-personnel mine ‘Nipun’, rugged and automatic communication system with enhanced capabilities, upgraded sights system for tanks and advanced thermal imagers. State-of-the art high mobility Infantry Protected Vehicles and Assault Boats were virtually handed over by Raksha Mantri enabling the troops deployed along the borders to respond to any challenge in a befitting manner. The equipment/systems have been jointly developed by Indian Army in collaboration with Defence Public Sector Undertakings, Defence Research & Development Organisation (DRDO) and the Industry, in line with the Prime Minister Shri Narendra Modi’s vision to modernise the Armed Forces, under the ‘Aatmanirbhar Bharat Abhiyan’.

Shri Rajnath Singh exuded confidence that the equipment and systems will enhance the operational preparedness of the Indian Army and increase their efficiency. It is a shining example of the country’s growing self-reliance prowess, in partnership with the private sector and other institutions, he said. The Raksha Mantri asserted that the infrastructural needs of the Armed Forces are increasing with constantly-changing times. He called for infrastructural development based on latest technology to help the Armed Forces remain prepared to deal with future challenges. He urged the Armed Forces to strive for excellence and continue dedicating themselves towards Nation Building.

The details of the equipment and systems handed over to the Indian Army are as follow:

Future Infantry Soldier as a System

Future Infantry Soldier is being equipped with three primary sub systems. The first sub system is the modern state of art assault rifle along with day and night holographic and reflex sights. The sights are mounted on the weapon and also on helmet to enable a 360-degree visibility and accuracy in operational conditions. In addition to the primary weapon system, the soldiers will also be kitted with multi-mode hand grenade which has also been procured indigenously along with multi-purpose knife.

For a long time, the Indian Army has been using vintage NMM 14 mines. With the efforts of Armament Research and Development Establishment, Pune and the Indian industry, a new Indian mine named ‘Nipun’ has been developed. It will enhance the protection provided to the troops on the borders. The mine is more potent and effective than the existing anti-personnel mine.

This equipment is for surveillance and detection. It gives visibility in both day and night and in adverse weather conditions to the soldiers to detect enemy movement and activities.

This equipment gives enhanced visibility and range to the commanders of armoured columns. Earlier, in T-90 tanks had image intensification systems which had its own limitations and constraints. The limitations have been overcome by use of thermal imaging sight produced by India Optel Limited.

This downlink equipment helps the helicopters in carrying out constant reconnaissance and surveillance of the borders and operational areas. While on missions, reconnaissance data observed is recorded in the system and can be accessed only when the helicopter returns to the base. The equipment, produced indigenously by M/s Exicom Private Limited, is fitted on the Advanced Light Helicopter.

Indian Army had exchanges that provided line communications to the operationally deployed units. However, there were limitations in terms of numbers of subscribers and quantum of data that could be communicated. Also, the equipment could not work with latest internet protocol technology. A new system has been developed by the Bharat Electronics Limited, Kotdwar, which overcomes all inadequacies of the older system.

In challenging forward areas, where no lines or other forms of communication are available, Indian Army has to extend its communication system. With this radio relay system, forward troops are in a position to operate their communication equipment and radio sets at much longer ranges and in greater depths than hither-to-fore. This is an advanced system with frequency hopping technology and very high capacity. It has been developed by Bharat Electronics Limited, Bengaluru.

One of the most challenging terrain and operational sectors of the country is the Siachen Glacier. The complete power requirement in the area to operate various equipment was met only through captive generator supply. A solar photo-voltaic plant has been installed to improve the overall energy requirements and also obviate dependence on fossil fuels. This plant at Partapur was virtually dedicated to the Nation by the Raksha Mantri.

There are boats operating in Pangong Tso lake, however, they have limited capabilities. The LCA is much more versatile and has overcome the limitations of launch, speed and capacity. It has enhanced the capability to operate across the water obstacles in Eastern Ladakh. LCA has been indigenously developed by M/s Aquarius Ship Yard Limited, Goa.

RPAS removes the operational limitations faced by the Indian Air Force aircraft and the heron Unmanned Aerial Vehicles at tactical level. It empowers the Indian Army by removing the restricted capability for surveillance, detection and reconnaissance at the infantry battalion and mechanised units level.

IPMV provides mobility and more protection to a large number of infantry soldiers posted at the Northern Borders. It has been made by M/s Tata Advance Systems Limited.

The second vehicle along with the Infantry Mobility Protected Vehicle for enhanced mobility of our troops in Eastern Ladakh is the Quick Reaction Fighting Vehicle (Medium). It facilitates quick deployment of troops and will enable much faster reaction. The vehicles have been procured from Tata Advanced Systems Ltd. These are tailor made vehicles with high mobility, enhanced firepower & protection. It will facilitate in creating moral ascendency in our Northern Borders.

On the occasion, the Raksha Mantri also unveiled Scales of Accommodation (SoA) 2022, which provides authorisation for construction facilities for operational, functional, training, administrative, living and recreation for the Defence Services. The SoA 2022 is in line with the Government policies and vision like Swachh Bharat, Sugamya Bharat, Digital India, Green Buildings, Sustainable Development, Renewable Energy, Reduction of Carbon Footprint Promotion of Yoga & Fit India etc. Shri Rajnath Singh asserted that with the implementation of SoA 2022, there would be tremendous improvement in facilities/infrastructure and specifications commensurate to contemporary requirements and will further improve the working and living conditions for the defence personnel including civilians. He described SoA 2022 as a testament to the hard work and dedication of MES.

Shri Rajnath Singh also launched a series of e-Governance applications to foster transparency, build efficiency and unlock the latent productivity of Military Engineer Services (MES). These include those on budget management, product approval, contracts, scrutiny of works and their status and an electronic cash book. “ERP software is playing an important role in the development of various industries and increasing the efficiency of institutions. The portals and applications launched today will increase the work efficiency of MES and save time. It is a crucial effort towards effective e-governance,” he said.

Furthering the ‘Digital India’ mission, the Raksha Mantri launched 198 video modules which touch upon the wide knowledge base on relevant subjects of latest construction techniques, sustainable technologies, new trends in infrastructure development etc. These illustrative videos will be telecast over educational television channel of ‘Vande Gujarat’ under the aegis of Bhaskaracharya National Institute of Space Research and Geo-Informatics (BISAG-N). Shri Rajnath Singh appreciated the fact that these videos will be uploaded on the internet as well and help the people at large.