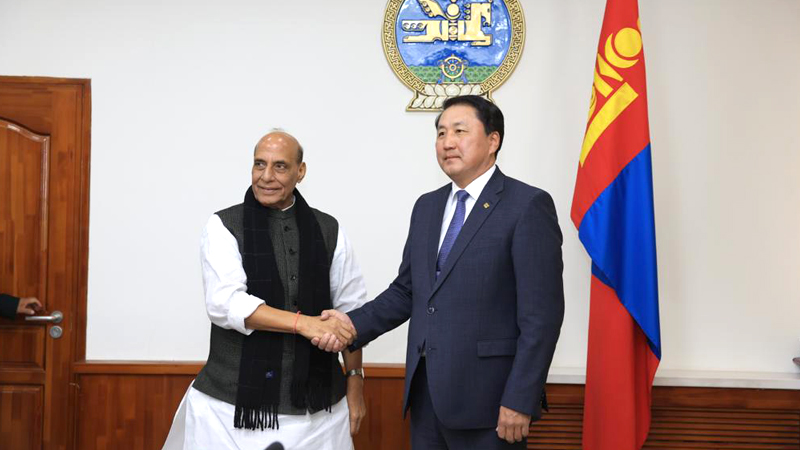 On the first day of engagements of his Mongolia visit, Raksha Mantri Shri Rajnath Singh held bilateral talks with his Mongolian counterpart Lt Gen Saikhanbayar Gursed in Ulaanbaatar on September 06, 2022. He also called on the President of Mongolia and Chairman of State Great Khural. The Raksha Mantri also inaugurated a Cyber Security Training Centre, built with assistance from India, and laid the foundation stone of the India-Mongolia Friendship School, to be constructed with Indian assistance.

After reaching Mongolia on the night of September 05, 2022 to become the first Indian Defence Minister to visit the country, the hectic day of engagements began for Shri Rajnath Singh with a ceremonial guard of honour at the Ministry of Defence in Ulaanbaatar. It was followed by delegation-level talks between the Raksha Mantri and his Mongolian counterpart. They discussed effective & practical initiatives to further expand bilateral defence engagements and deliberated on regional & global issues of mutual interest.

Both Ministers reaffirmed their commitment to fully implement the Strategic Partnership based on mutual trust & understanding, common interests and shared values of democracy & rule of law. The two Ministers also reiterated their resolve to reinvigorate the India-Mongolia Joint Working Group (JWG), which will meet in India later this year.

Shri Rajnath Singh called on the President of Mongolia & Commander-in-Chief of Armed Forces Mr Ukhnaagiin Khurelsukh, wherein they recalled their strong bonhomie and previous interaction in 2018 when together they laid the foundation stone for the ongoing Oil Refinery project being undertaken by assistance from India. He also met the Chairman of State Great Khural of Mongolia Mr G Zandanshatar.

Another highlight of the day was the inauguration of Cyber Security Training Centre, built with assistance from Government of India, at National Defence University in Ulaanbaatar by the Raksha Mantri. The Raksha Mantri was briefed about the facilities at the Centre by the officials. He also interacted with the personnel of the Mongolian Armed Forces being trained at the Centre.

Shri Rajnath Singh, along with Minister of Education and Science of Mongolia, laid the foundation stone of the India-Mongolia Friendship School, which is being established with the assistance from Government of India.