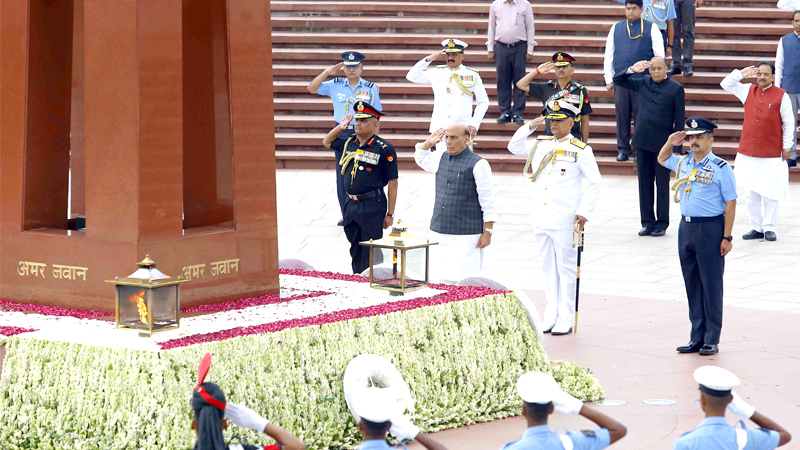 The Nation is today paying tributes to the bravehearts of the Kargil war on the 23rd anniversary of India’s historic victory in 1999, which is celebrated as ‘Kargil Vijay Diwas’ every year. To mark the day, Raksha Mantri Shri Rajnath Singh, Raksha Rajya Mantri Shri Ajay Bhatt, Defence Secretary Dr Ajay Kumar, Chief of the Army Staff General Manoj Pande, Chief of the Naval Staff Admiral R Hari Kumar and Chief of the Air Staff Air Chief Marshal VR Chaudhari laid wreath at National War Memorial, New Delhi and paid homage to the fallen heroes who ensured India’s victory during the Kargil war of 1999. Senior civil and military officials of Ministry of Defence were also present on the occasion.

In a message in the visitors’ book of National War Memorial, Shri Rajnath Singh recalled the valour and sacrifices of the Armed Forces personnel during the war, which protected the unity and integrity of the Nation. “The Nation will forever be grateful to the sacrifices made by the Armed Forces. With their memories in our hearts, we will keep energising ourselves and continue to move forward on the path of nation building,” he wrote.

In a tweet, the Raksha Mantri commended the act of valour & indomitable spirit of the bravehearts which will remain etched forever as a defining moment in India’s history.

Various events, remembering the fallen heroes of the Kargil war, have been organised across the country, including at Kargil War Memorial in Dras to mark this momentous occasion. During the Kargil conflict, the gallant soldiers of the Indian Army, with the help of Indian Air Force, overcame insurmountable odds, hostile terrain and inclement weather to win against the enemy that had occupied dominating heights.