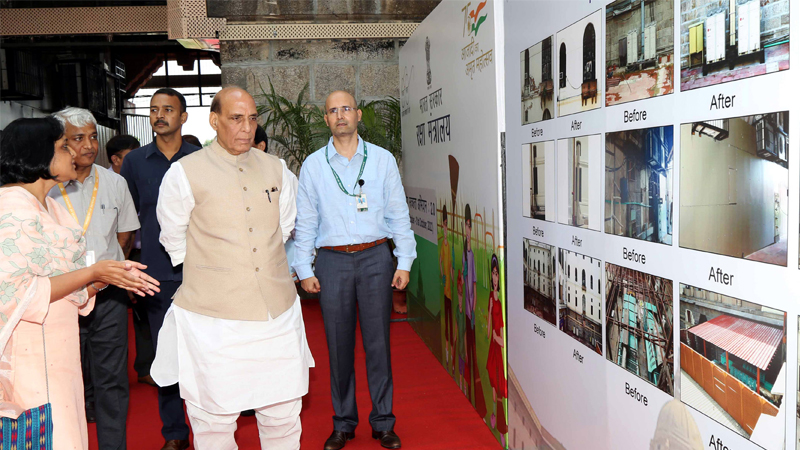 Raksha Mantri Shri Rajnath Singh inspected the South Block premises in New Delhi on 4th October 2022, as part of monitoring the progress of Special Campaign 2.0 on Swachhta being conducted by Ministry of Defence. He administered an oath on Swachhta to the officials of Ministry of Defence and sanitation staff and felicitated the Swachhta veers for their commendable efforts in keeping the premises neat and tidy.

Raksha Mantri said that the cleanliness drive started by Mahatma Gandhi has been transformed into a nationwide movement under the leadership of Prime Minister Narendra Modi, by taking it to every nook and corner of the country. Compared to earlier times, the cities and villages in the country are more clean today after the launch of Swachhta movement which enhanced awareness among the people.

The Special Campaign 2.0 of the Ministry of Defence is being carried out from 2nd October 2022 to 31st October 2022 with emphasis on field/outstation offices under the Ministry. Special focus is on space management and enhancement of work place experience. Offices responsible for public interface and service delivery are given preference.

During the Special Campaign 1.0 on Swachhata, a record number of 44276 files were reviewed and 16696 files were weeded out in the Ministry of Defence. 833 outdoor cleanliness campaigns were conducted, 187790 sq. ft of space was freed and a revenue of 2.09 crore was generated from the sale of office scrap during the campaign.