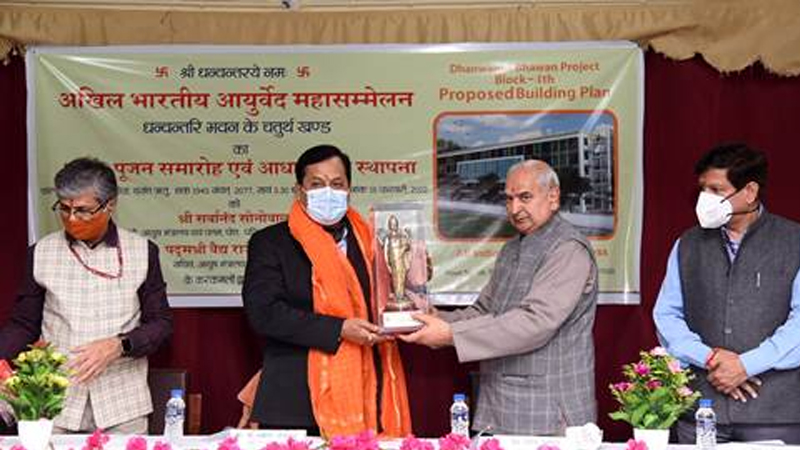 Union Minister of Ayush Shri Sarbananda Sonowal today praised Ayurveda for leaving its mark across the world. The Minister was speaking at the foundation laying ceremony for the fourth part of Dhanwantri Bhawan today organised by the All India Ayurveda Congress at its headquarters in Punjabi Bagh West.

Hailing India’s traditional medicine system, the Minister said that Kenya’s former Prime Minister Raila Odinga travelled to India for treatment of his daughter’s eyesight. Her eyesight was restored by Ayurvedic treatment for which he thanked the our  Prime Minister Shri Narendra Modi  and urged him to spread Ayurveda across the world.

Praising India’s rich culture and tradition, Shri Sonowal said, “We want the priceless culture that India had for ages should be known to the young generation of the country. We should teach them how our ancestors, Rishis and Munis dedicated their lives to make our country strong”.

Speaking on the occasion, All India Ayurveda Congress President, Padma Shri and Padma Bhushan Vaidya Devendra Triguna ji said that the building will be completed in one and half years and soon to be functional.

Other dignitaries include Secretary of Ayush, Vaidya Rajesh Kotecha , Advisor, Ayurveda, Ministry of Ayush Shri Manoj Nesari and many more.