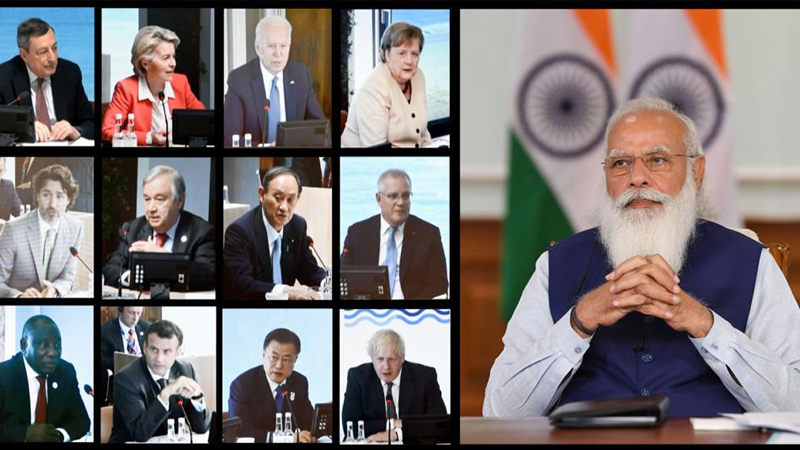 On the second day of the Outreach Sessions of the G7 Summit, Prime Minister Shri Narendra Modi took part in two sessions titled ‘Building Back Together—Open Societies and Economies’ and ‘Building Back Greener: Climate and Nature’.

Invited to speak as a Lead Speaker in the session on Open Societies, PM recalled that democracy and freedom were a part of India’s civilizations ethos. He shared the concern expressed by several Leaders that open societies are particularly vulnerable to disinformation and cyber-attacks, and stressed the need to ensure that cyberspace remains an avenue for advancing democratic values and not of subverting it. Hihglighting the non-democratic and unequal nature of global governance institutions, PM called for the reform of the multilateral system as the best signal of commitment to the cause of Open Societies. The leaders adopted the ‘Open Societies Statement’ at the end of the meeting.

In the session on climate change, PM highlighted that the planet’s atmosphere, biodiversity and oceans can not be protected by countries acting in silos, and called for collective action on climate change. Speaking about India’s unwavering commitment to climate action, he mentioned the commitment by Indian Railways to achieve Net Zero Emissions by 2030. He stressed that India is the only G-20 country on track to meet its Paris commitments. He also took note of the increasing effectiveness of the two major global initiatives nurtured by India i.e. the CDRI and the International Solar Alliance. Prime Minister stressed that developing countries need better access to climate finance, and called for a holistic approach towards climate change that covers all dimensions of the problem- mitigation, adaptation, technology transfer, climate financing, equity, climate justice and lifestyle change.

Prime Minister’s message of global solidarity and unity, especially between open and democratic societies and economies, in tackling the global challenges of health, climate change and economic recovery was well received by the Leaders at the Summit.