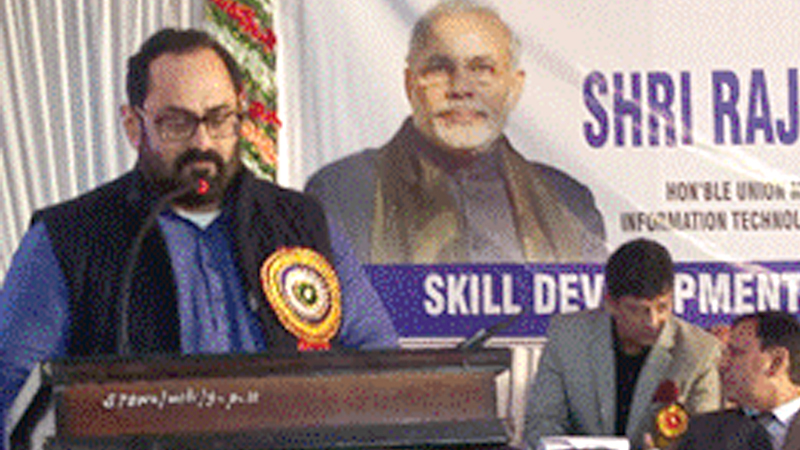 The Union Minister of Skill Development and Entrepreneurship and Electronics and IT, Shri Rajeev Chandrasekhar today said young Indians must equip themselves with skills in line with the evolving times—in order to stay relevant for employment or/and entrepreneurship opportunities.

Skills are passport to prosperity and opportunities. Along with education, it is necessary to possess a future-relevant skill so that it would be easier to remain competitive in the job market or entrepreneurship fields, the Minister said, addressing students and staff members at the Government Polytechnic College, Chanderkote in Ramban district.

Stating that Prime Minister Shri Narendra Modi envisioned that all young Indians even in remotest parts of India, must have access to skills to pursue many opportunities in New India, Shri Chandrasekhar said that the Government was now offering 5000 skills programmes—both short term and long term—for students/young entrepreneurs to avail. The curriculum has been changed and new, futuristic courses added as demands for skills will change in the coming days with the rapidly changing technological environment, he added.

Reaffirming that the Prime Minister’s approach to development has been that of Sabka Saath, Sabka Vishwas and Sabka Prayas, Shri Chandrasekhar said under his leadership, New India has been thriving well in the post pandemic world as compared to other developed countries, with an aim to achieve the target of One Trillion USD Digital economy/ Five Trillion USD Economy by 2026.

He also visited a Skills exhibition organised by the students and staff members of the polytechnic college and was impressed by the innovative displays–ranging from tech, automotive, electronics products to traditional art/crafts items of the state.

Later at Ramban, Shri Rajeev Chandrasekhar, inaugurated a Job Fair at which he interacted with both job seekers and recruiters who were present. He also distributed offer letters and certificates of completion of training to the eligible candidates. He said jobs are important determinant about opportunities available. We will ensure that the next job fair to be held here in the six months will be three times bigger in size with many more companies taking part. Also, we will request the public sector units to mandatorily absorb the skilled talent locally available, he added.

The Minister then conducted a review of the Ramban district’s skill development plans about which he was given a detailed presentation by Shri Mussarat Islam, District Development Commissioner, Ramban.  Shri Chandrasekhar discussed with the officials ways to improve the skilling ecosystem with locally available opportunities.

The Minister also distributed keys of motorised cycles and scooties to the specially-abled beneficiaries at a function in Ramban. Vehicle keys to the beneficiaries of the Mumkin/ Tejaswani Schemes were also given away by him at the function.

Earlier, the Minister landed this morning in Jammu where he was received by a group of officials of the State government and Skill Development department including Mr Sudharshan, Director, Skill Development and Mr S Santhimalanana, Regional Director, RDSDE.