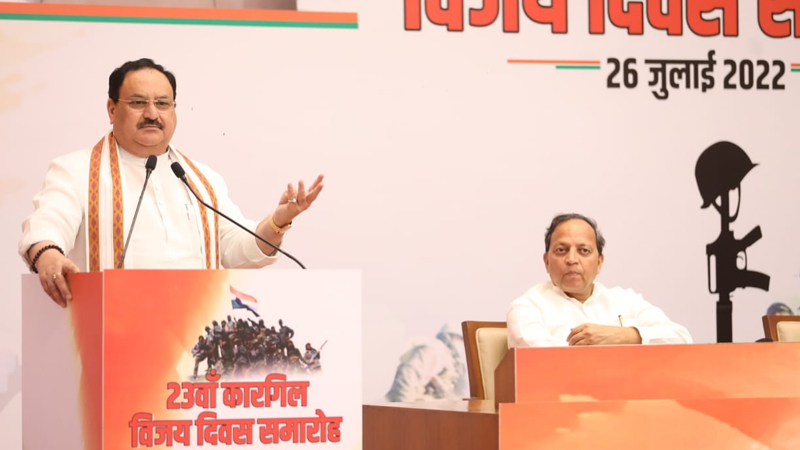 I on behalf of crores of the Bharatiya Janata Party workers pay my deep respect to the martyrs of Kargil who laid down their lives to protect our Motherland and our honour.

Today under the leadership of our Honourable Prime Minister Shri Narendra Modi ji the hardware and software of our armed forces is strong. Our soldiers are the most courageous and most efficient in the world today.

We have the bravest of soldiers who are ready to sacrifice their everything for their Motherland, and that why India will always be victorious in every war.

Till 2014 our armed forces were 20 years behind in terms of technology, ammunition, fighter planes and infrastructure, and it was because for 10 long years the Congress led UPA government did nothing for the modernisation of our armed forces and also failed miserably in upgrading our infrastructure on our borders.

Today we have a full squadron of Rafael, we have fighter Apache, Chinook, we have surface to air missiles, deadly Howitzers, Vajra artillery guns, while we have started exporting bullet proof jackets. We are developing state of the art missile tracking system.

In previous governments our brave soldiers under attack had to wait for Delhi’s permission to fire even one bullet. Delhi used to advice them of ‘Wait and Watch’. Today our Army swiftly responds to any attack on our borders and later submits report in Delhi. This is the real change which has been brought by the change in government and leadership.

During the Kargil war the then Honourable Prime Minister Shri Atal Bihari Vajpayee ji during his US visit had flatly refused to meet and holds talks with the then Pakistani Prime Minister Nawaz Sharif despite request from the American President. This is the sterling quality of the decisive leadership.

Every Diwali our Honourable Prime Minister Shri Narendra Modi ji spends time with our soldiers posted on our borders. We all know that we all able to celebrate Diwali peacefully at our homes because we know that our brave soldiers are guarding our borders round the clock.