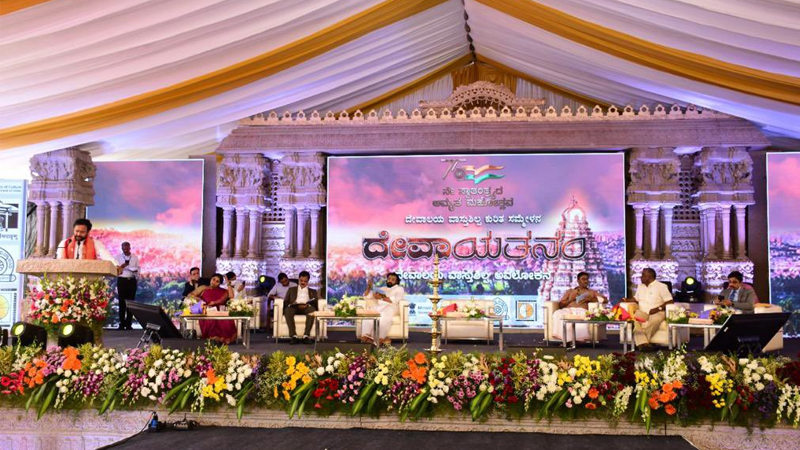 Speaking at the event, the Union minister Shri G. K Reddy said that temples are the symbol of India’s culture and way of life. He said that the country’s rich tangible and intangible cultural heritage needs to be celebrated and protected and the conference provides a platform to discuss, deliberate and disseminate to the world the grandeur of Indian temples, art and architecture.  The Minister further said that this was in line with the overall vision of the Prime Minister Shri Narendra Modi who inspires us with 5 V’s, i. e. Vikas (development), Virasat (heritage), Vishwas (trust), Vignan (knowledge) will lead us to becoming a vishwaguru so that India shows the world the way.

Elaborating on the 5 V’s, the Minister said that the Union Government’s development effort (Vikas) is ensuring benefits are reaching the poorest of the poor. He said that the government is striving towards protection, preservation and propagation of our wonderful heritage (Virasat) so that future generations have access to it. He further said that the Union government operates with trust and wins the confidence (Vishwas) of its citizens and the world. By leveraging knowledge, science and technology (Vigyan) the country is building a self-reliant Atma Nirbhar Bharat. India with a repository of old and traditional heritage, knowledge, confidence and a prosperous citizenry is dedicated and working unitedly to become a Vishwaguru for the world.

He also said that the temples of this land should be seen through multiple dimensions as they simultaneously provide spiritual well-being to the soul, enlightenment through education, economic opportunities to the local community, a creative outlet for the craftsmen, artists and artisans, and are a repository of our culture, and glory that shades on our past. He said that a Hindu temple is a combination of art and science which includes Shilpa sastra, vasthu sastra, geometry and symmetry.  The temples promote unity, integrity, and civilization. It was during the freedom struggle that all the freedom struggles were resolved before temple fire to fight for freedom of the country.

He also added that the temples of Hampi are already featured in the World Heritage List of the UNESCO for their Sheer brilliance, Scale of imagination, and Scintillating architecture. He further added that approximately 10 of India’s 40 UNESCO World Heritage Inscriptions are Hindu Temples in different architectural styles, patterns and symmetry.

He said that this year the Union Government has proposed Hoysala temples of Belur and Somnathpur to the UNESCO World Heritage List, apart from this India is rebuilding many grand temples. The Minister spoke about a grand temple of Lord Ram that is being built in Ayodhya. He also mentioned that after close to 250 years, the spiritual capital of India – Kashi, has been rejuvenated and has more accessibility with amenities and better infrastructure for devotees. Union Minister also added that the state of Telangana has built 2 large stone carved temples worth Rs. 1,000 crores. The Union Government focus is to make existing spiritual places accessible to devotees through better infrastructure and world class amenities.

He said that the Ministry of Tourism has conceived of the PRASHAD and SWADESH DARSHAN Scheme to facilitate tourism infrastructure and provide better accessibility and experience at spiritual places with a budget of approximately Rs. 7,000 crores which is approximately 1 billion US dollars.

On the occasion the Minister also released a booklet of information on Temples of India along with the Karnataka Minister, ASI officials and state officials.

Stating the conference as a milestone in itself, Union minister of state for culture Shri Arjun Ram Meghwal said temples have been centres of Indian art, knowledge, culture, spirituality, innovation and education. He added that there have been three major styles of setting up temples in India known as Nagara, Dravidian and Vesara. Dashavatar temple in Devgarh is of Nagara style which is prevalent between the Himalayas and the Vindhya mountains. The Kailasanathar temple in Kanchi is Dravidian style temple, developed on the land of Krishna and Kaveri River and Vesara is a hybrid form Nagara and Dravidian style, Papanatha temple is one of the examples of Vesara style. Culture Secretary Shri Govind Mohan said devayatnam, the house of god is not only a place to worship and perform rituals but also a centre for education, fine arts, music, science & technology, rituals & traditions or every activity shaping the society.He further added that Construction of temples started with the beginning of human settlements and evolved through ages. He informed that Architecturally in India there are three main styles Nagara, Vesara and Dravida but several regional styles have been developed in different parts of the country during different period. While congratulating ASI for organizing such international conference, he said that the beautifully carved ancient temples are testimony to our glorious history, art, tradition, science & technology and various aspects and their study helps us in connecting the present with the past.

While giving the introduction of the conference, Smt. V. Vidyavathi DG, ASI said temples of India have been centre for art, culture and commerce. She said “Everything in our life revolves around temples. In modern era when everything has been changed, our relationship with temple has not changed.”

Prof. Alok Tripathi, ADG, ASI in his address said that temples were the centre of Indian culture and heritage in the society and are repositories of history but the study on them was not done in wider perspective.

In today’s proceedings, the conference deliberated upon the philosophical, religious, social, economic, technical, scientific, art and architectural aspects of temple. The aim of the conference is to create  interest among scholars and students alike, to learn and respect our heritage.