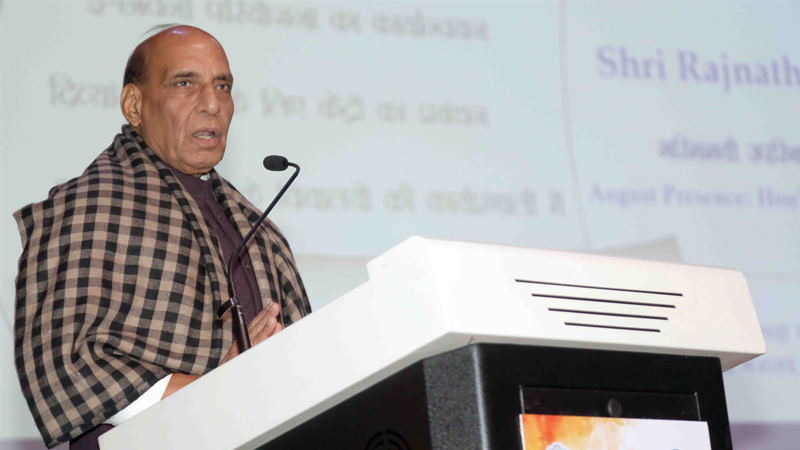 Raksha Mantri Shri Rajnath Singh has called upon Directorate General Defence Estates (DGDE) to strengthen its internal legal system and gain expertise in state land revenue laws to effectively deal with unnecessary land related disputes. Addressing the Defence Estates Day function in New Delhi on December 16, 2022, Shri Rajnath Singh asserted that certain elements sometimes encroach upon the government land by forging land & property related documents and taking advantage of the legal loopholes, resulting in a litigation that goes on for years. He stressed that the time, money and energy wasted in the process must be avoided and DGDE must equip themselves to stay always ready to deal with such issues.

“There are many law universities and colleges in our country with which DGDE can collaborate to train and update its officers in land laws. The officers should remain updated on judgments of different courts on land issues. Focus should be on capacity building and making the processes simpler & better using new technologies. The department must continue to increase its competencies in the field of land management and local area administration, while striving to make its system more robust,” Shri Rajnath Singh said.

The Raksha Mantri described the maintenance and management of defence land as one of the tasks of national importance. He complimented DGDE for rolling out numerous steps in this direction, including the survey and digitisation of about 18 lakh acres of defence land and establishment of a Centre of Excellence to promote the use of latest technologies in land surveys.

The Raksha Mantri also appreciated the fact that the e-Chhawani software has been shortlisted for the Digital India Awards 2022 under the category of digital empowerment of citizens. He termed the achievement as proof that the software has played an important role in providing citizen centric services to the residents of cantonments. He urged DGDE to develop and expand this application for the benefit of general public as well.

Shri Rajnath Singh pointed out that Ministry of Home Affairs has requested DGDE to conduct a survey for Custodian of Enemy Property for India (CEPI). It is the first survey of land and buildings by DGDE outside Ministry of Defence, which will be started by DEO Delhi in collaboration with revenue authorities from Gautam Buddha Nagar, Uttar Pradesh. He urged DGDE to prepare updated maps and land details for CEPI using latest technology.

Terming DGDE as a bridge that connects civil society with the Armed Forces, the Raksha Mantri exhorted the Organisation to bolstering that link by working with the approach of participatory development and coming out with more people centric policies, keeping in mind the interests of both sides.

Cantonment Boards operate and run various schools across 52 Cantonments in the country to impart quality education and various skills to students of the locality. There are 194 schools under Cantonment Boards with primary to Sr. Secondary level presently. There are presently 63,400 students enrolled in these schools. To enhance ‘Ease of living’ for the citizens in Cantonment areas, School Management System has been implemented in these 194 schools. The major online modules are:

Keeping in view the requirements and suggestions of stakeholders, the functionalities of Suvidya has been enhanced by incorporating multilingual facility in six local languages other than English. These languages are Bengali, Gujarati, Hindi, Kannada, Marathi and Tamil. This is going to be one of the few applications in which students, teachers & parents will avail the facility in regional languages. The dashboard and reports for monitoring the performance of schools has also been incorporated in Suvidya.

Ministry of Defence owns large tracts of land of approx. 18 lakh acres both inside and outside Cantonments. The Armed Forces require large areas of land for various activities. The management of defence land lies with different defence organisations including DGDE/DEOs who are responsible for the protection under their respective management. The protection measures, inter alia, includes removal of encroachment from defence land.

For efficient and effective monitoring of removal of encroachment from defence land, DGDE has developed an Encroachment module under Real Time Record Management project. This will facilitate DEOs/CEOs to report encroachment cases to Estate Officers appointed under Public Premises (Eviction of Unauthorised Occupants) Act, 1971 who will be able to issue different notices and orders as per the Act for eviction of unauthorised occupants. Since the case will be processed online, it will obviate the need for additional data entry.

Shri Rajnath Singh also gave away Raksha Mantri Awards for Excellence for innovation and digital achievements in the fields of health, education and sanitation along with public service and land management. In 2020 and 2021, considering the COVID-19 situation, awards were not given to two categories namely Raksha Mantri Awards for Excellence for Maintaining Centres for Divyang Children and for Improvement in the functioning of Cantt Boards Schools.