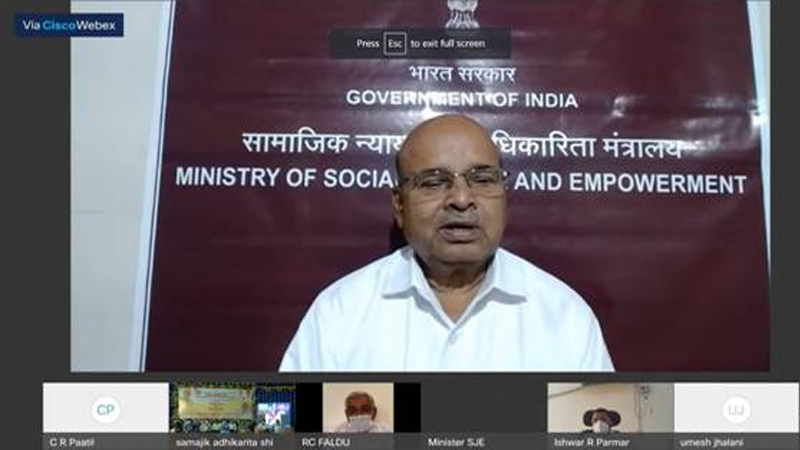 Union minister for Social Justice and Empowerment Shri Thaawarchand Gehlot has said that looking at the interest towards the sports among the Divyangjan of the country and their good performance in Paralympics, the ministry has decided to establish five ’Divyangta Khel Kendra’ in different parts of country, out of which Ahemdabad City is identified to open one of such facilities.

Virtually addressing the ‘Samajik Adhikarita Shivir’ for distribution of aids and assistive devices to ‘Divyangjan’ under the ADIP Scheme of the Ministry of Social Justice and Empowerment, Government of India in Jamnagar, Gujarat today, the Minister informed that the central government has released Rs 8.06 crore fund to Gujarat under Scholarship program benefitting 2808 beneficiaries. He said, 709 Railway stations, 10,175 Bus Stations and 683 websites have been covered under Sugamya Bharat Abhiyan. He added that work on the National Mental Health Rehabilitation Center in Sehore, Madhya Pradesh, has been started by CPWD.

Speaking on the occasion, Shri Vijay Rupani, Chief Minister, Gujarat said that the society which does not care about Divyangjan is itself a disabled society. He said that in the year 2016 the Right to Persons with Disability Act was brought in, which not only provided more security, but also ensures and protects the fundamental rights of the person with disabilities across the nation. The Chief minister underlined the need for empowerment of Divyangjan and to bring them in the mainstream of society for overall development of the country.

The Shivir was organized by the Department of Empowerment of Persons with Disabilities (DEPwD) in association with ALIMCO and District Administration Jamnagar. A total of 6225 aids and assistive devices valued at Rs.3.57 crore will be distributed free of cost to 3805 Divyangjan at Block/Panchayat levels. In view of COVID 19, out of total 3805 pre-identified Divyang beneficiaries, Aids and Assistive Devices were provided to approx 50 beneficiaries of Jamnagar city block in the inaugural distribution camp today. Remaining identified beneficiaries will be provided their prescribed assistive devices subsequently at their nearest respective Blocks at their location in a series of follow-up distribution camps in Jamnagar and Devbhumi Dwarka Districts.

The camps are conducted under the Scheme of Assistance to Disabled Persons (ADIP) for Purchase/Fitting of Aid/Appliances. ADIP is one of the most popular schemes for providing assistive aids and appliance to Divyangjans, and is organized by Artificial Limbs Manufacturing Corporation of India (ALIMCO), a Public Sector Undertaking under the Ministry of Social Justice and Empowerment.