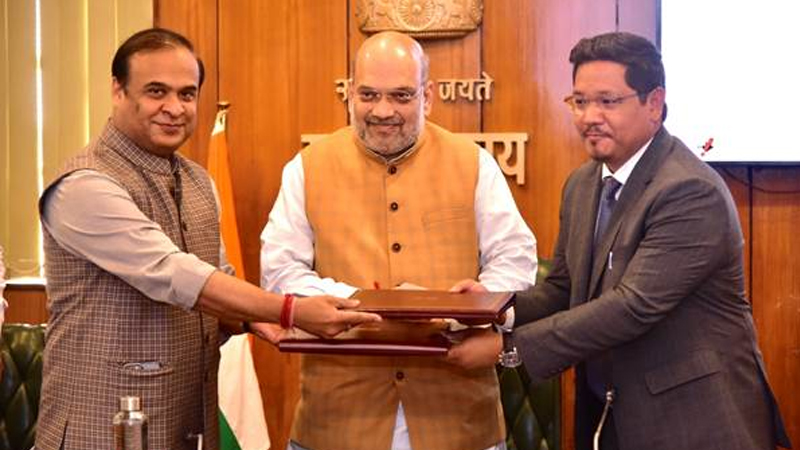 In presence of the Union Home Minister Shri Amit Shah, a historic agreement was signed in New Delhi today by the Chief Minister of Assam Shri Himanta Biswa Sarma, and the Chief Minister, Meghalaya Shri Conrad K. Sangma, for settlement of the interstate boundary between the States of Assam and Meghalaya, in respect of 6 out of 12 areas of difference. This is another milestone in the fulfilment of Prime Minister, Shri Narendra Modi’s vision of a peaceful and prosperous North East. Senior officers from Union Ministry of Home Affairs, Government of Assam and Government of Meghalaya were also present on the occasion.

Speaking on this occasion, Union Home Minister Shri Amit Shah said that today is a historic day for a dispute-free North East. He said Shri Narendra Modi has made several efforts for the peace process, development, prosperity and promotion of the cultural heritage of North East, which we all have witnessed, since 2014, when he became the Prime Minister. He said that after becoming the Home Minister in 2019, when I met the Prime Minister, he spoke about the priorities of the government in these four areas. He said that this journey from 2019 to 2022 has been successful in achieving a huge milestone.

Shri Amit Shah said that during the last three years, the Government under the leadership of Prime Minister Shri Narendra Modi has signed several agreements to end extremism and bring lasting peace to the North Eastern states. He said NLFT (SD) agreement was signed in August, 2019 to bring the extremists in the mainstream of society in Tripura which contributed greatly in making Tripura a peaceful state. Then a landmark agreement was signed on January 16, 2020, to solve the 23-year-old Bru-Reang refugee crisis forever. Under this, more than 37,000 tribals who were leading a difficult life, are now living a life of dignity today. Shri Shah said that the Bodo Accord signed on 27 January 2020 resolved the 50 year old Bodo issue while maintaining the original form of Assam. The Assam Government and the Government of India have fulfilled 95 percent of the terms of this agreement and today Bodoland is known as a peaceful region and is on the path of development. The Karbi-Anglong Agreement was signed on September 4, 2021 to resolve the long-standing dispute in the Karbi regions of Assam. Under this, more than 1,000 armed cadres surrendered and joined the mainstream.

The Union Home Minister said that today another 50-year-old dispute is going to be resolved with this agreement. He said that in a very short span of time, six out of 12 issues have been settled between Assam and Meghalaya and about 70 per cent of the border between the two States has become dispute-free. He said the development of the Northeast is not possible unless disputes between States are resolved and armed groups do not surrender. He thanked the Chief Ministers and officials of both the States on behalf of Prime Minister Shri Narendra Modi and the Central Government.

The Union Home and Cooperation Minister said that efforts should be made in the Amrit Mahotsav year of Independence to realize the dream of Prime Minister Modi of a peaceful and prosperous North East. He said that from 2019 to 2022, more than 6,900 armed cadres have surrendered and more than 4,800 weapons have been surrendered to the administration. This is a very big achievement. Prime Minister Shri Narendra Modi calls the North East as Ashtalakshmi and with these efforts, the North East will not only become part of the national mainstream, but will also become a driving force in national development. He said the Modi government has taken many initiaives including Narcotics Free, Flood Free and Infiltrator Free North East. The Government of India and the Governments of the North East are moving forward in a time bound manner on all these fronts. Shri Amit Shah said he is confident that the strong political will shown by the Chief Ministers of Assam and Meghalaya, we will make the North East dispute-free through discussions with all the States.