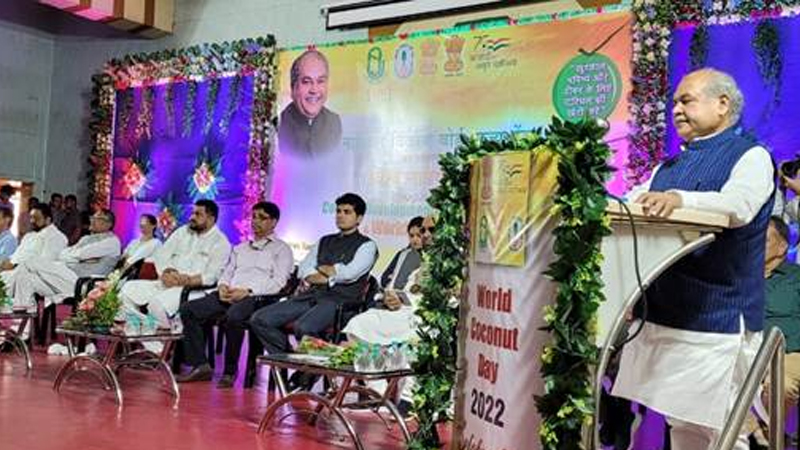 The Union Minister for Agriculture and Farmers Welfare, Shri Narendra Singh Tomar has said that the Prime Minister Shri Narendra Modi has enhanced the credibility of the country by making the whole world realize the power of India. At the same time, he never forgets the villager-poor-farmer.

“If the poor are empowered then the country’s strength will grow, if the villages develop, the country will develop and if the farmers’ homes prosper, then Mother India will be prosperous. The PM is making constant efforts to make this dream come true,” said Shri Tomar.

Shri Tomar said this in Junagadh (Gujarat) while addressing the conference of coconut farmers. Shri Tomar said that the land of Gujarat is very fertile, it is the birthplace of Father of the Nation, Mahatma Gandhi, Iron Man Sardar Vallabhbhai Patel and former Prime Minister Shri Morarji Desai. Prime Minister Shri Narendra Modi, who also hails from the state, overcome many difficulties and obstacles to raise the stature of Gujarat and the nation. Behind this is the sacrifice, penance and hard work of Shri Narendra Modi. Even as the Chief Minister of Gujarat before becoming the Prime Minister, Shri Modi’s rising leadership continued to impress everyone. Gujarat was struck by the earthquake when Shri Modi was the Chief Minister, but even in that difficult time, due to his vision, hard work and management, the state dealt with that disaster effectively and, in a short time, overcame the tragedy. As a result, the efficiency of Shri Modi was not only praised by the country, but he was also appreciated all over the world. Shri Tomar said that Shri Modi spread prosperity by bringing Narmada water to more regions of Gujarat, now there is sufficient availability of water for drinking and irrigation in the state. While Gujarat was known for drought, today it is known for its greenery. The Gujarat model developed by Shri Modi’s methodology has been deliberated upon in the country and the world in every aspect including the state’s tourism development, employment opportunities, industrialization, investment friendly environment and good governance. The Union Minister said that the Gujarat experience came in handy after Shri Modi took over as the Prime Minister in 2014. Shri Modi has the zeal to work, determination to make decisions, honesty in character and his commitment to take the country forward has resulted in poverty alleviation, eradication of inequality, women’s empowerment, employment opportunities and the nation’s economy is getting stability, industrialization is increasing, work is being done on Make in India, Startup India, Standup India and Skill India. The work of strengthening the foundation of the country has been done in the last 8 years during the tenure of Prime Minister Modi, it is a matter of pride and honour for all. Shri Tomar said that the PM has successfully taken steps in this direction to increase the credibility of India in the whole world, today no one, in any political forum in the world, can ignore India. Shri Modi has said that we will talk not by bowing or raising our eyes in front of anyone, but with equal eye-to-eye, due to which India’s rising stature is visible in front of the world today. The work of making India’s power felt across the whole world is being done successfully under the leadership of Shri Modi.

Shri Tomar said it is the wish of the Prime Minister that the cultivation of coconut in the country should increase, he keeps asking for it, – to increase the processing units in the country and export of products. Like the Pradhan Mantri Fasal Bima Yojana, available as a security cover for common farmers, there is an insurance cover for coconut farmers as well, in which the share of premium of the Center, State and farmers is in the ratio of 50, 25 and 25 percent respectively, all should avail its benefit. Shri Tomar said that there are lakhs of farmers in the country whose income has increased from double to ten times. In this regard, he gave the example of saffron farmers of Kashmir and said that due to the development of saffron park there the price has increased from one to two lakh rupees per kilogram. During the Azadi Ka Amrit Mahotsav, the Indian Council of Agricultural Research (ICAR) has documented 75,000 such farmers, where these farmers have narrated how their income has increased.

Shri Tomar said that not only did the PM commit, but income support is being given to the farmers. Rs. 11,395.38 crore has been given to 61.43 lakh farmers in Gujarat under the Pradhan Mantri Kisan Samman Nidhi (PM-Kisan), while more than Rs.2 lakh crore has been disbursed to 11.5 crore farmers across the country in their bank accounts. While the MSP was hiked by 1.5 times, the Central Government also started procurement of pulses and oilseeds. Opening the doors of investment in the field of agriculture, the Agriculture Infrastructure Fund was started with a provision of Rs. one lakh crore while another 50,000 crore rupees was allocated for Agriculture and Allied Sectors. Provision of more than Rs. 6,850 crore was made to set up 10,000 new FPOs for the betterment of small farmers, of which more than 3,000 have already been set up. The Mission on Oil Palm was started with an allocation of Rs. 11,000 crores to augment the edible oils production. All this is a result of the multipronged thinking of the Prime Minister. It is the effort of Shri Modi to continuously promote Agriculture through the State Governments and transform it into advanced agriculture and empower the villagers-poor-farmer. Shri Tomar also praised the works of Gujarat Government.