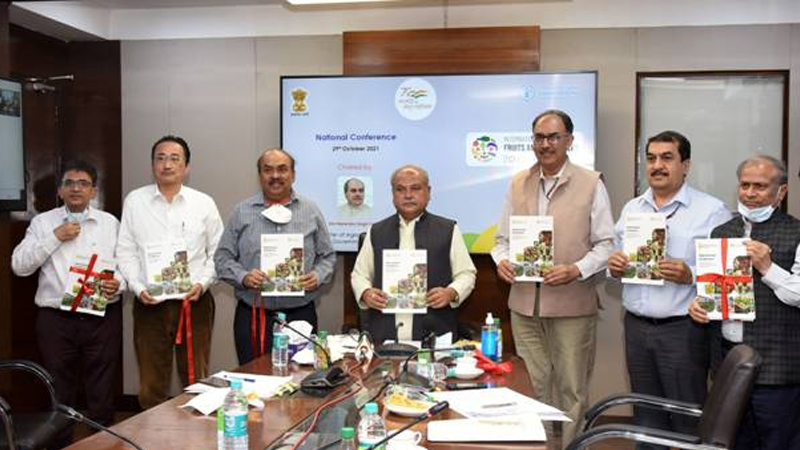 Union Minister for Agriculture & Farmers Welfare Shri Narendra Singh Tomar addressed a National Conference on “International Year of Fruits and Vegetables” organized by the Ministry of Agriculture and Farmers’ Welfare in collaboration with the Food and Agriculture Organization of the United Nations. The Minister also released operational guidelines for the Horticulture Cluster Development Programme and QR code of the guidelines. The conference was organized as part of the celebration of the “International Year of Fruits and Vegetables, 2021” declared by United Nations Organization.  The theme for this year is “Awareness about the nutritional benefits of fruits and vegetables for balanced and healthy diet and life style.” In his keynote address, Shri Narendra Singh Tomar said that this conference is a unique opportunity to raise awareness about the important role of fruits and vegetables in human nutrition, health, food security and also in achieving Sustainable Development Goals of the United Nations. To promote Globally popular Exotic and important Indigenous fruit crops in the country, the Ministry has identified 10 globally popular Exotic fruit crops of commercial importance and 10 important Indigenous fruit crops with high nutritional and nutraceutical properties. The State Horticulture Departments have also been given targets for the year 2021-22 regarding area expansion for these crops. During the current year, 8951 hectares area for exotic fruits and 7154 hectares area for indigenous fruits will be brought under cultivation.

Shri Tomar said, “India is the second-largest producer of horticulture, producing about 12% of the global fruit and vegetable production. During the year 2019-20, we recorded the highest ever production of 320.77 million metric tonnes in horticulture, while the horticulture production for 2020-21 is estimated to be 329.86 million metric tonnes, which is also higher than the previous year.” He stated, “PM Shri Narendra Modi has said that 21st century India needs post-harvest food processing revolution and value addition amid increased agricultural production. Farmers should get modern storage facilities near their village”. Prime Minister has advocated for increased private sector participation along with research and development in the agriculture sector, the Minister added.

The Minister expressed hope that India can achieve the goal of bringing fruits and vegetables to the plate of the poorest of the poor, not as a special food but as a daily necessity.

Shri Sanjay Agarwal, Secretary, Department of Agriculture & Farmers Welfare, Government of India said that horticulture has become the growth engine of Indian Agriculture. He further stated “International Year of Fruits and Vegetables”, is an attempt of the UN to raise awareness on the importance of fruits and vegetables in our daily lives as well as in doubling of farmers’ income. He said no one should be deprived of nutritional fulfilment.

Shri Garth Atkinson, International Expert made a presentation on “Global shift in Horticulture Supply Chain”. He talked about the Key Drivers of change in the area of Demography, Environment and Marketing. During his presentation, he informed about the current practices of Production, Post-harvest Management, Processing, Logistics, Marketing and their future trends.

Shri Rajbir Singh, Joint Secretary (MIDH), Department of Agriculture & Farmers Welfare, Government of India presented an overview of the event on International Year of Fruits and Vegetables while Dr. S.K. Malhotra, Horticulture Commissioner, gave a theme presentation during the seminar.

The Conference was also attended by senior officers of the Ministry of Agriculture and Farmers Welfare, Government of India, senior officers of Embassy of Israel, Embassy of the Netherlands, Green Innovation Centre, GIZ, officers from National Horticulture Board, Coconut Development Board, ICAR Institutes and all State Horticulture Missions along with leading growers /processors/farmers across the country.