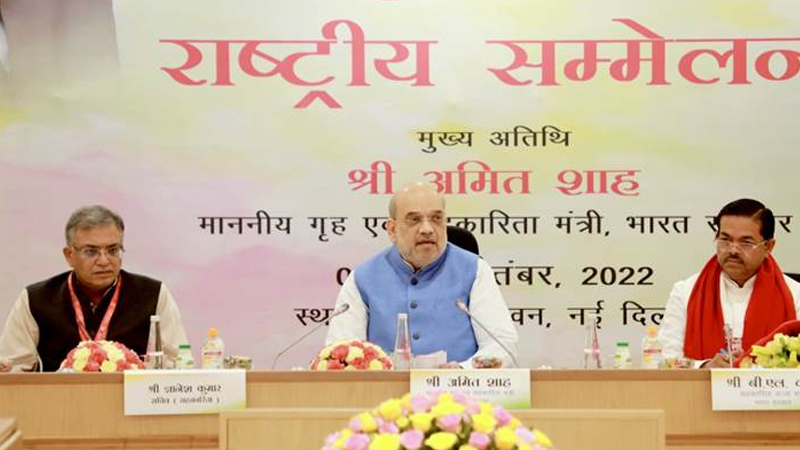 In his address, the Union Cooperation Minister said this two-day conference will prove to be a step in the days ahead to take cooperatives to a new level. He said the cooperative movement  in India is about a 125 years old, but if we do not make timely changes in any activity, it becomes out of date and now time has come for the cooperative sector to strengthen itself according to the needs of the times and win everyone’s trust once again. Shri Shah said the Ministry of Cooperation was created by Prime Minister Narendra Modi on 6th July 2021 and in just one year, the Ministry has organized many meetings and conferences in all the related areas of cooperatives. Cooperation is mainly a State subject and our Constitution has left all activities of cooperatives to the States, but in a vast country like India, the entire cooperative movement should follow the same path,  and for this all States have to have common views.

Shri Amit Shah said it is most important to strengthen the PACS to strengthen cooperatives and the government is taking many steps for this. He told the cooperative ministers of the States that everyone together has to inculcate the spirit of Team India in the cooperative sector and that too without politics, as trustees lwill have to move forward to strengthen and develop the cooperative sector in their respective States. If we look at the history of coooeratives in the last 150 years, it is seen that cooperatives have made a proud contribution to India’s economy and it is  a goal that in the next 100 years, Cooperatives must be a part of the Indian economy and make a big contrubution in fulfilling the dream the Prime Minister, Shri Narendra Modi’s dream of a US $ 5 trillion economy

Shri Amit Shah said in the field of cooperatives, we have to adopt uniformity in policy. The cooperative department of every State should follow the same path and with the same subject. If we look at the cooperative sector, we see three parts in the country. First, the developed States which are mostly in the West and South. Second, the developing States that are in the Central parr and in the North. Third, the underdeveloped States which are in the East and the North East. He said it should be our goal that the Cooperative Movement should be run equally in every State. In States where activities are slow or closed, we should try to accelerate them and for this we need a new Cooperative Policy. Such a Cooperative Policy that considers every State and Union Territory equally and works towards ensuring all-round development of the cooperative sector as well as identifying new areas. Shri Shah said Prime Minister, Narendra Modi has been  working to raise the standard of living of 70 crore poor persons. For these crores of people, Shri Modi  has provided housing, drinking water, gas cylinders, free food grains for two years, all health facilities up to Rs. 5 lakh and electricity and now the aspirations of these people have been awakened and now these crores of people want to contribute in the development of the country. But these people have very little capital and if they want to contribute to the development of the country, then only cooperatives can be the medium. Co-operatives is the only sector in which a lot of people can come together and contribute hugely even with minimal capital and Amul in Gujarat is a classic example of this. To consider this type of all-round development, a committee has been constituted to prepare a cooperative policy in which all States are represented and former Union Minister Shri Suresh Prabhu, who has done good work in the cooperative sector, is has been appointed the Chairman of this Committee.

The Union Minister for Home and Cooperation said mass production is necessary for the development of the economy, but in our vast country with a population of 130 crore, ‘Production by Masses’ is also very important and its concept does not come from anywhere else but from cooperatives. For this, our cooperative policy will take the country far ahead. We have set the focus of this policy – ​​free registration, computerisation, democratic elections, ensuring active membership, professionalism in governance and leadership, professionalism and transparency, and accountability. Along with this, we want to incorporate effective human resource policy, which should have transparency in recruitment, empowerment of infrastructure, use of technology and policy-rules and guidelines for this. If there is a special participation of youth and women in the cooperative sector, then cooperatives will go a long way. We also have to engage with the outside business world and achieve all standards of competition because now we cannot escape competition. Cooperatives now have to make it a habit to live with competition, only then will cooperatives be able to move forward. Along with this, we also want to carve out some new dimensions, such as insurance, health, tourism, processing, storage and services. These are areas in which a lot can be done through cooperatives.

Shri Amit Shah said PACS will have to be made multipurpose, which is the need of the day. Many new dimensions that we want to add through these model bylaws also have the provision of transparency, accountability and mobility. By doing this we will be successful in strengthening the core unit of the cooperative sector and give a new and long and strong life to the cooperative sector. At present about 65,000 PACS are under implementation and we have decided that we will make 3 lakh new PACS in 5 years. Thus, we have set a target of registering around 2,25,000 PACS. These packs will also be of dairy, will also be FPO, will also distribute water, will also distribute gas, will also make cow dung gas, will also engage in storage work. He said Panchayats which do not have PACS have been identified. If PACS are to be made multi-purpose, then we have to give a fresh look at the accounting system. For this, Prime Minister Modi has decided to  computerize from PACS to APACS, for smooth seamless transactions. We will computerize 65,000 PACS in the first phase and a good software is also being developed by the Cooperation Ministry of the Government of India in which all works will be included. After this, PACS, District Cooperative Banks, State Cooperative Banks and NABARD, all four will run on the same software and same type of accounting system, which will also facilitate online audit. Many of our problems will be solved by accepting the bylaws of  PACS, computerization of PACS and adoption of new software. This software will be available in all languages ​​of the country so that every State will be able to conduct business for their PACS in their native language. In this way an ambitious plan has been brought by the Cooperation Ministry, but it cannot be possible without the active cooperation of all.

The Union Cooperation Minister said by liquidating defunct PACS as soon as possible, new  PACS should be formed because as long as the old PACS are in existence, new PACS will not be able to be formed. Government led by Prime Minister Narendra Modi  is also taking a decision at the policy level that till now PACS are engaged   only in disbursing short term finance, but now PACS should also be able to disburse medium and long term finance as well, even though they have to do so through the Kheti Bank. A proposal is being mooted on this to authorize PACS. He said the idea is to change the entire face of NAFED to promote cooperative marketing. By proactively cooperating with the State Marketing Federation, NAFED will actively integrate the PACS with marketing  and the entire marketing profit will eventually reach the PACS through the NAFED State and District Federation. For so many changes, trained manpower, youth who know cooperative finance, youth who know computer, youth who imbibe the concept of cooperatives are needed. If trained man power is needed then today there is not even a single cooperative university and now the government  has decided that a cooperative university will be formed and under the aegis of the state cooperative union, we will also open one affiliated college in every State so that different types of cooperatives will be able to train man power. We will also  take this cooperative university to the districts, which will increase the chances of finding trained man power. Shri Shah said today if cooperatives are to be developed, then we do not have data. For this, the Government of India is also going to create a permanent database and this data bank will be updated. We want to give access to this database to the District and its Union and District Cooperative Banks.

Shri Amit Shah said along with computerization of PACS, we are going to bring a big change in the Multi State Cooperative law. We are also bringing in Model By-laws, National Cooperative University, National Cooperative Data Bank, an Export House, a Multi State Cooperative Society to sell organic agriculture products and for seed production also we are making a cooperative. He said the Ministry of Cooperation has done a lot of work in the last one year to strengthen the cooperatives. Earlier, sugar mills used to attract additional Income Tax which was a great injustice and was in existence for 50 years. By abolishing additional Income Tax within one month of the formation of the Ministry of Cooperation, we have done the work of giving equal status to the cooperative sector. The surcharge on co-operative societies has been reduced from 12% to 7%. Cooperatives across the country have benefited from this, we have worked to bring down the MAT rate from 18.5% to 15% at the corporate level. We have recognized cooperatives to buy and sell from GeM. We have also succeeded in getting changes from RBI, by taking a lot of positive decisions for rural and urban co-operative commercial banks which will increase their business and a listing of all pending questions of urban co-operative banks and banking sector with RBI is also in progress.

The Union Cooperation Minister said now the cooperative movement cannot be treated as a second class citizen. Shri Modi has given this confidence to the entire cooperative sector, but we also have to bring transparency, be accountable, increase efficiency, accept technology, accept professionalism and work hard to take cooperatives to new areas. He said that cooperative is the territory of the States and unless State units prepare themselves for this change, it can never happen. States should adopt these changes and contribute to the road map, only then will cooperatives get strengthened. The Government if India has no objective other than the welfare of crores of poor persons, by making the cooperative sector a strong pillar of the economy in the next 100 years.