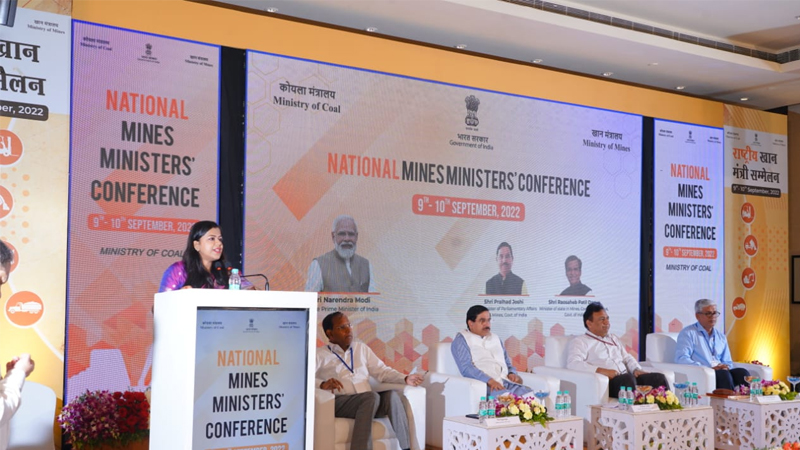 Union Minister of Coal, Mines and Parliamentary Affairs, Shri Pralhad Joshi inaugurated the National Mines Ministers’ Conference (NMMC) yesterday on 9th September, 2022 at Hyatt Hyderabad. The conference continued today on 10th September, 2022 with Ministry of Coal driving the session. The National Mining Ministers’ Conference was another step in the direction of making the coal sector ‘Aatma Nirbhar’ and promoting Sustainable Mining in India.

During the conference, discussions were held on reforms in the Coal Sector and their impact, Land acquisition for coal mining, Coal logistics and Operationalization of allotted coal mines.

The Union Government has introduced several reforms in partnership with States to boost Ease of Doing Business in the Coal sector. After cancellation of 204 coal blocks by the Hon’ble Supreme Court in 2014, first set of reforms were introduced in 2015 where allocation of coal blocks started. Commercial sale was not allowed. The second set of reforms were carried out in 2020 by amending the laws, introduction of a liberalized regime of commercial mining with no restriction on sale/utilization of coal and allowing the captive users to sell 50% of production in open market after meeting the captive requirement.

Recently, a policy allowing one time relaxation to surrender of coal blocks by PSUs without appropriation of Bank Guarantee has been issued. Ministry has adopted revolving auction of coal blocks where Coal blocks are offered for auction on regular basis.

It was discussed that Ministry of Coal has considered the interest of States while making the reforms. Earlier, blocks were allocated on fixed price basis and now through auction its on ad-valorem determined by the market. National Coal Index captures the movement of price from both domestic and international market.

It was highlighted that support from States is needed to harness the maximum benefits of the various reforms. Ministry of coal executes the commercial agreements and it is the State’s responsibility to look after the operationalization aspects. Revenue from commercial auctions also goes to the concerned States. It was discussed that States are free to frame Land Compensation policy and the Centre may follow States policy if it is better. States may advise the respective Directorates of Mines and Geology to look after the coal sector also as in the near future, since number of commercial mines is going to increase further.

The conference also saw an overview of next-gen reforms that are proposed by Ministry of coal. Among them, is sale of coal through market determined pricing mechanism, Coal Gasification and Just Energy Transition. It was informed that various steps have been taken by the Ministry to promote coal gasification including incentives such as 50% rebate in auction bid price, long term linkage from CIL has been allowed and a PLI scheme is being framed to support coal gasification by both public and private entities. The stakeholders were also informed about the country’s target to cut the emissions to Net Zero target by 2070 which may pressurize the coal sector not only to adopt more sustainable mining practices but also be ready for the transition. It was added the CIL’s plantation area got doubled in last three years. It was conveyed to lignite rich States that high-capacity lignite-based power plants may be established.

Concluding remarks were given by Secretary (Coal) Dr. Anil Kumar Jain and Hon’ble Minister of Coal, Mines and Parliamentary Affairs, Shri Pralhad Joshi and conference marked the end with Vote of Thanks delivered by CMD, SCCL Shri N. Sridhar.