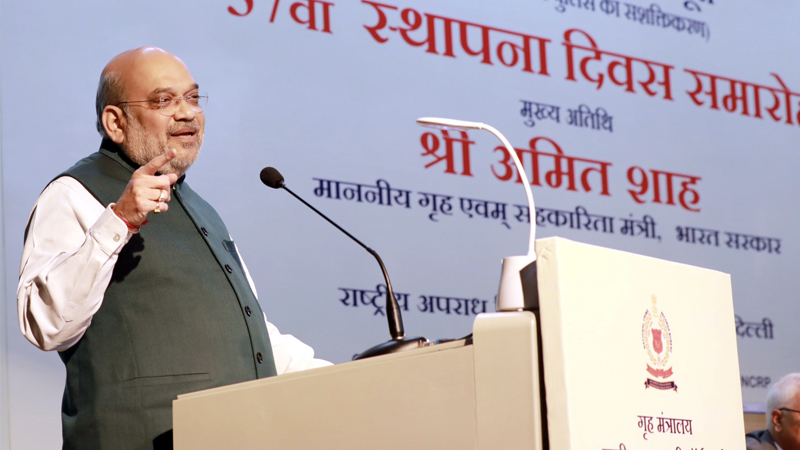 In his address, the Union Home Minister said today is a day of happiness for all those working in the field of internal security, that the NCRB is celebrating its 37th Raising Day. If any organization is in existence for 37 years, then it demonstrates its relevance and no matter which government was in power, the NCRB always received strength and encouragement due to its utility. To control crime it is indispensable to have data at one place, to analyse the data, to break the data down and to develope different strategies for its control. He said that a strategy can be made only when the analysis of the challenges at hand are available, one is aware of the resources available to meet the challenges and when these are analyzed and made a part of the strategy. Shri Shah said that the NCRB has a big role in handling the internal security of the country, especially the law and order situation. Shri Amit Shah said that when he was the Home Minister of Gujarat, IG level crime conferences were held regularly on the borders of neighbouring states of Gujarat. Data is needed to make crime conferences result-oriented and when we work on this, NCRB’s data is very useful and also greatly helps in controlling law and order in border districts. He added that when different states prepare one-year police action plans, it is found that the source of the date is from NCRB. States should use NCRB’s data in formulating their annual police strategy, it should have a multi-dimensional and multi-purposed use in crime control, only then will this institution become result-oriented

Shri Shah said that the NCRB is like the brain and action is possible only when States make use of its data. The NCRB has created a very good framework of data protection and data analysis by assimilating many things. The Union Home Minister said that this data can be used effectively by not just considering it as raw data. A habit should be made to analyze the data and use it in every district, police station, range and DGP headquarters across the country.

The Union Home and Cooperation Minister said nothing happens just by creating data, one has to go to the States and discuss with them the methodology of using the data. Some States have used the data and both the Bureau of Police Research & Development (BPR & D) and the NCRB should share their best practices. Shri Shah said the Crime and Criminal Tracking & Network Systems (CCTNS) Hackathon has also been inaugurated today and the BPR&D should take it to every State, as hackathons can solve many challenges. Hackathons are the only way through which the police can stay two steps ahead of criminals. He said the utility of CCTNS is satisfactory in the real sense and the responsibility of implementation of the Inter-operable Criminal Justice System (ICJS) has also been given to the NCRB, and both these mechanisms should become multifunctional. The data which used to be in physical format till now is now in electronic form through the CCTNS. Connecting so many police stations of the country is not an easy task. All these have been connected through technology, but now partners have to be found to move forward and personnel will have to be trained to use it. Along with CCTNS, E-Prison, E-Forensic, E-Prosecution and E-Court in unison form a complete system of the Criminal Justice System. Shri Shah said that 16,390 police stations in the country have been connected on CCTNS, but Central agencies of such as as the Central Bureau of Investigation (CBI), the Narcotics Control Bureau (NCB) and the National Investigation Agency (NIA) are still not connected with it. All Agencies must join the CCTNS as soon as possible and make data 100 percent complete. 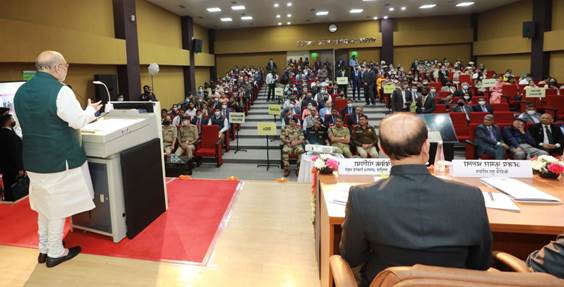 The Union Home Minister said that the target of the second phase of ICJS has been set by the Government of India, with an expenditure of about Rs. 3,500 crore by the year 2026. After its completion, it should be made increasingly useful by using Artificial Intelligence, Block Chain, analytical tools and fingerprint system. He said till now around one crore fingerprints have been registered and if these become available to all police stations, then there is no need to pursue criminals, as after getting their fingerprints, their address can be found on the data base of the police station.

Shri Shah said that a NCRB should be prepared and this data should be used for crime control. This would fulfil the purpose of the data. He said NCRB’s data shows crime through the lens of the IPC. The data should also be compiled through the social perspective instead of only looking at it through the lens of the IPC. If such data can be analysed in a different way, then there will be huge benefits in crime control. For example, whenever the Kharif season is around the corner, FIRs of quarrels/fights between farmers will be registered at police stations and sometimes, such cases even reach serious levels.

Shri Amit Shah said the police should keep an eye on places where large educational institutions and new hostels are being built and monitor the type of activity that is taking place around them. A solution cannot be found by looking at them only from the perspective of the IPC, it should be analyzed separately and this is the responsibility of the NCRB and the BPR&D. After analyzing it separately, these two organisations should present a paper with a solution at the DGP conference and workshops should be organised after discussing with the States. If crime data is not used to reduce crime, then we cannot take maximum advantage of keeping the data. As long as we do not promote the use of all these features, do not place them in the user forum, until then it cannot be fully beneficial. He said that police organisations have all the resources which will make work less laborious, but they do not have information. Until one takes all these facilities down from the officer level to the person sitting in the police station, we will not be able to harness the benefit and it is the responsibility of the NCRB to implement this.

The Union Home Minister said that three aspects are important while dealing with data. Access – data should be available, publicized and retrievable in such a way that the right person gets access to the data at the right time. The data storage format – the format should not only be for storing data, but also for storing data by transforming the information into such a format that maximum data can be used. He said that a system of its analysis should be made using the most modern tools and it should also be managed. Data should be accessible, registration should be in a good format and tools should also be created for its use. By dividing work into these three parts, if the NCRB makes a resolution in the Amrit Mahotsav of Independence, it we will increase the utility of data by at least 20 percent in the next five years, then this will be a big task done by NCRB in the Amrit Mahotsav of Independence. Shri Shah said that in the past 37 years, you have done a great job by storing data and making it available. Now our entire focus needs to be towards the use of data and use of data to bring results. This 37 year journey of the NCRB is an inspiration to all agencies involved in the management of law and order.