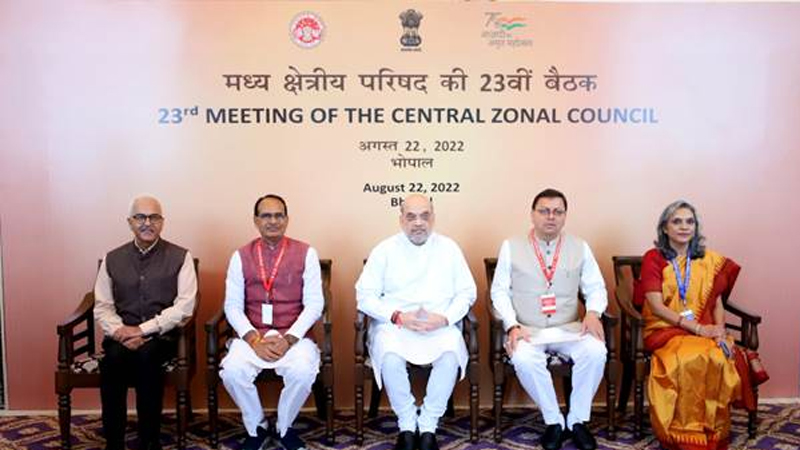 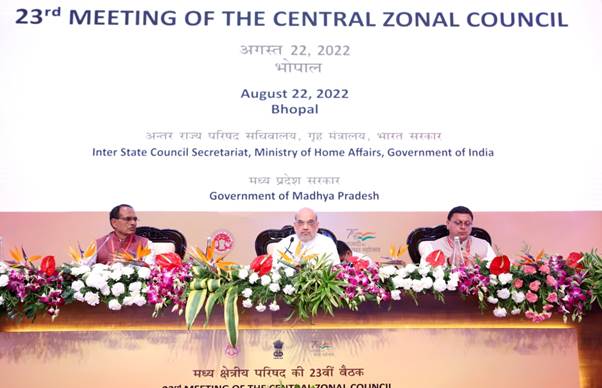 In his address, the Union Home Minister said that Madhya Pradesh, Uttar Pradesh, Uttarakhand and Chhattisgarh, are important for their geographical location, contribution to GDP and development of the country. Earlier thesel States were considered as BIMARU States, but now they are moving out of it and are on the path of development. He said that the Central Zonal Council States are major centers of food grain production and have taken the concept of ‘Team India’ of Prime Minister Shri Narendra Modi to the ground.

Shri Amit Shah said that Prime Minister Shri Narendra Modi has always worked to strengthen the spirit of cooperative federalism. In the last 8 years after becoming the Prime Minister, Shri Narendra Modi has kept the concept of ‘Team India’  before the Nation and made it possible. Frequency of meetings of the Zonal Council have increased. He said that the increase in the number of meetings despite the Covid-19 emphasize on the concept of Team India of the Prime Minister. Shri Amit Shah also said that there has been a 27 percent increase in resolving issues in the Zonal Council meetings since 2019, which is a great achievement.

The Union Home Minister said that although the role of the Regional Council meetings is advisory, but on the basis of the experience of three years as Home Minister, he can say that by giving importance to the meetings of the Council and its Standing Committee, many issues have been addressed. 30 issues were discussed in the last meeting of the Central Zonal Council, out of which 26 issues have been resolved, while in the 14th meeting of the Standing Committee held on January 17, 2022, out of  54,  36 issues have already been resolved. He said, a total of 18 issues were discussed in today’s meeting, out of which 15 were resolved, which is a great achievement. Mr. Shah said that with the increasing in the frequency of the meetings of the Council, exchange of good practices between the States is taking place. This not only gives inspiration to other States, but also creates better and healthy relations between the Centre and States, many issues between States are resolved through dialogue and the spirit of mutual cooperation between Sates has also strengthened.

The Union Home Minister said that after the formation of the government under the leadership of Prime Minister Shri Narendra Modi in the country, along with dealing strictly with the problem of Left Wing Exremism in the Naxalite affected areas included in the Central Zonal Council, many important steps have been taken for development in these areas. He said that it has yielded good results. When Left Wing Extremist violence was at its peak in 2009, the number of incidents of Left Wing Extremist was 2,258 which decreased to 509 in 2021. He said since 2019 the incidents of Left Wing Extremism have come down very rapidly. In 2009, 1,005 people died in militant violence, while in 2021, 147 people were killed. Shri Shah said that there has also been a decrease in Left Wing Extremist violence at police stations during this period, from 96 such incidents in 2009 it came down to 46 in 2021. He said the Central Government is further strengthening security forces in Left Wing Extremism-affected areas and filling gaps in security, under which 40 new security camps have been opened in the last three years and 15 more are to be opened. It is a great achievement but still, the Government of India along with the States are committed to fully eliminate the problem of Left Wing Extremism.

Shri Amit Shah said the government has opened about 5,000 post offices and more than 1200 bank branches in the last three years in Left Wing Extremism affected areas. Also, to speed up the telecom services, more than 2,300 mobile towers are being installed in the first phase and installation of 2,500 mobile towers in the second phase is going on. The Union Home Minister also said that there are many development schemes of State Governments in Naxal-affected areas and the States by giving priority to them, should aim for full results of these schemes. He said more the  development in Naxal-affected areas, the less will be the recruitment of Naxalites and the sources of mobilization of Left Wing Extremists will also be exhausted. The Union Home Minister urged Naxal-affected states to focus more on dealing with this problem so that it can be rooted out.

The 23rd meeting of the Central Zonal Council discussed the significant progress made towards expansion of banking facilities within 5 kms of all villages as per the vision given by Prime Minister Shri Narendra Modi for expansion of the banking network in rural areas. The 112 Emergency Response Support Service (ERSS) is the single number emergency line in the country and is functioning in 35 States/UTs. The online Sakhi Dashboard is being operated by the Government of India under the ‘Sakhi -One Stop Center’ for safety of women. The meeting also discussed the seamless integration of the Police Help Line No. 112 with the Women Help Line No. – 181 and Child Help Line No. – 1098 and through this and shifting the cases related to women to ‘Sakhi -One Stop Center’ on real time basis. In today’s meeting, the council was apprised that as a result of the discussion in the 22nd meeting of the council held at Raipur, the Food and Public Distribution Department of the Government of India has issued revised criteria for the loss / profit in the storage of wheat and rice, which is equally applicable to the institutions of the Central Government and the State Governments. The issue of release of grants to State Home Guards and declaring Bhopal, Indore and Raipur airports as international airports was also discussed in the meeting. The Union Home Minister also asked the Chief Ministers and Chief Secretaries of the States included in the Central Zonal Council to regularly monitor the issues raised in the Council meeting every month so that these issues can be resolved expeditiously.