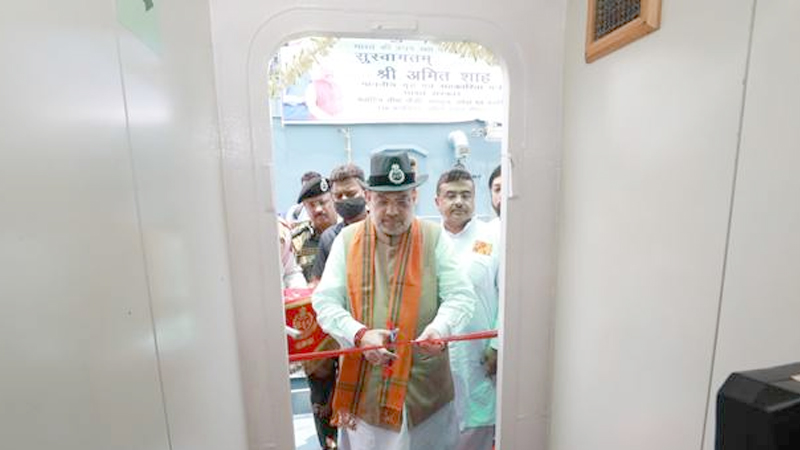 The Union Home and Cooperation Minister, Shri Amit Shah, on the first day of his two-day visit to West Bengal, today inaugurated the Narmada, Sutlej and Cauvery Floating Border Outposts (BOP) on the Indo-Bangladesh border to protect the inaccessible areas of the Sundarbans. Shri Amit Shah flagged off the Floating Boat Ambulance and laid the foundation stone of the Maitri Sangrahalaya. The Home Minister also addressed the ‘Seema Prahari Sammelan’ at Haridaspur BOP on the Indo-Bangladesh border. Several dignitaries including Union Ministers Shri Nishith Pramanik and Shri Shantanu Thakur and Director General of Border Security Force (BSF) were present on the occasion.

Be it the deserts of Rajasthan, the Rann of Kutch or preventing crocodile infiltration in the Sundarbans in West Bengal, your passion keeps the nation safe. In his address, the Union Home and Cooperation Minister said Whenever I am amongst Jawans of the Central Armed Police Forces, I have a feeling of having new energy in me. He said Under leadership of Prime Minister Shri Narendra Modi, the nation is progressing in every field today, and the most important reason is that our borders are safe. Shri Amit Shah said that wherever I visit various parts of the country, I proudly say that We can sleep peacefully because our Jawans on the border are serving the nation 24 hours a day.Therefore, I want to express my gratitude to all our soldiers on behalf of the people of the country. Many of our soldiers have made the supreme sacrifice while countering those tampering with India’s borders. Due to the bravery and dedication, the Border Security Force has so far received one Mahavir Chakra, 4 Kirti Chakras, 13 Vir Chakras and 13 Shaurya Chakras. 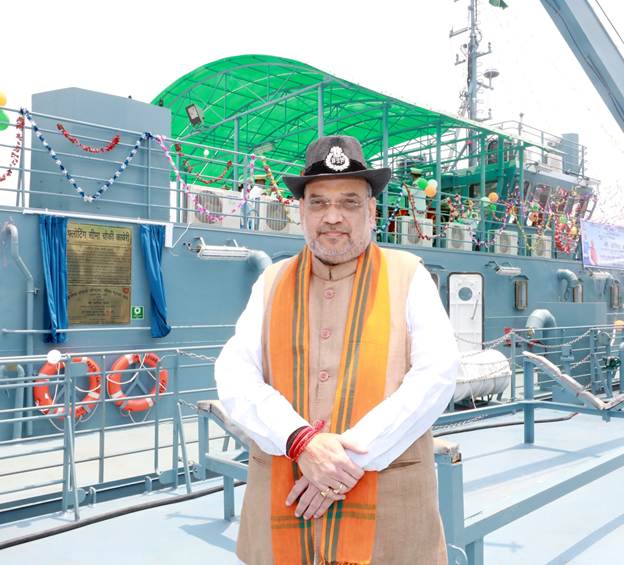 Shri Amit Shah said that under the leadership of Shri Modi, the basic goal of the Government of India is to make the internal and external security of the country impenetrable. He said that along with the hard work, sacrifice, and valor of BSF Jawans, they need to be equipped with modern technology and for border security, we are providing them with  modern technology from around world. Today as a part of this, three floating BOPs, Sutlej, Kaveri and Narmada have been dedicated to the nation. Kochi Shipyard has built them in light of Shri Modi’s  vision of self-reliant India. The cost of one BOP is Rs. 38 crore and it weighs around 53,000 metric tonnes. These floating BOPs are equipped with modern facilities and safety equipment, the front section of these BOPs are bullet proof for the safety of our Jawans, as well as arrangements have been made for plenty of food supplies and these BOPs  can float with a DG set without refueling for a month. He said the Sundarbans is a very sensitive area. A BOP is accompanied by 6 small boats and it has adequate arrangements to prevent both infiltration and smuggling. The Home Minister said that foundation stone of a Friendship Museum has been laid. He said India has always emphasized on the protection of human rights around the world. In the 1970s, when human rights were violated and horrific atrocities were committed in a neighboring country, both the BSF and the the Army defended human rights in that area with great valour. Shri Amit Shah said BSF postings are very difficult, and working in border areas is not easy, but it is always the endeavor of Prime Minister Shri Narendra Modi that our Jawans working in border areas should face the least difficulties. That is why a methodology catering to their  health, housing satisfaction ratio  and having  more time with their familes has been put in place. At the same time, we aim to reduce the inconvenience faced by the BSF, by increasing facilities at places of postings. The Union Home Minister said it is a matter of happiness that women are now being deployed in the BSF and they are proudly protecting Mother India,  shoulder to shoulder with with men. The Government of India has a five-year programme to create separate barracks for women and take care of their requirements. The Union Home Minister said the golden years of your lives that you provide to the service of Mother India, are priceless and I want to assure you that the Government of India will leave no stone unturned  in addressing  the problems that you and your families may face.